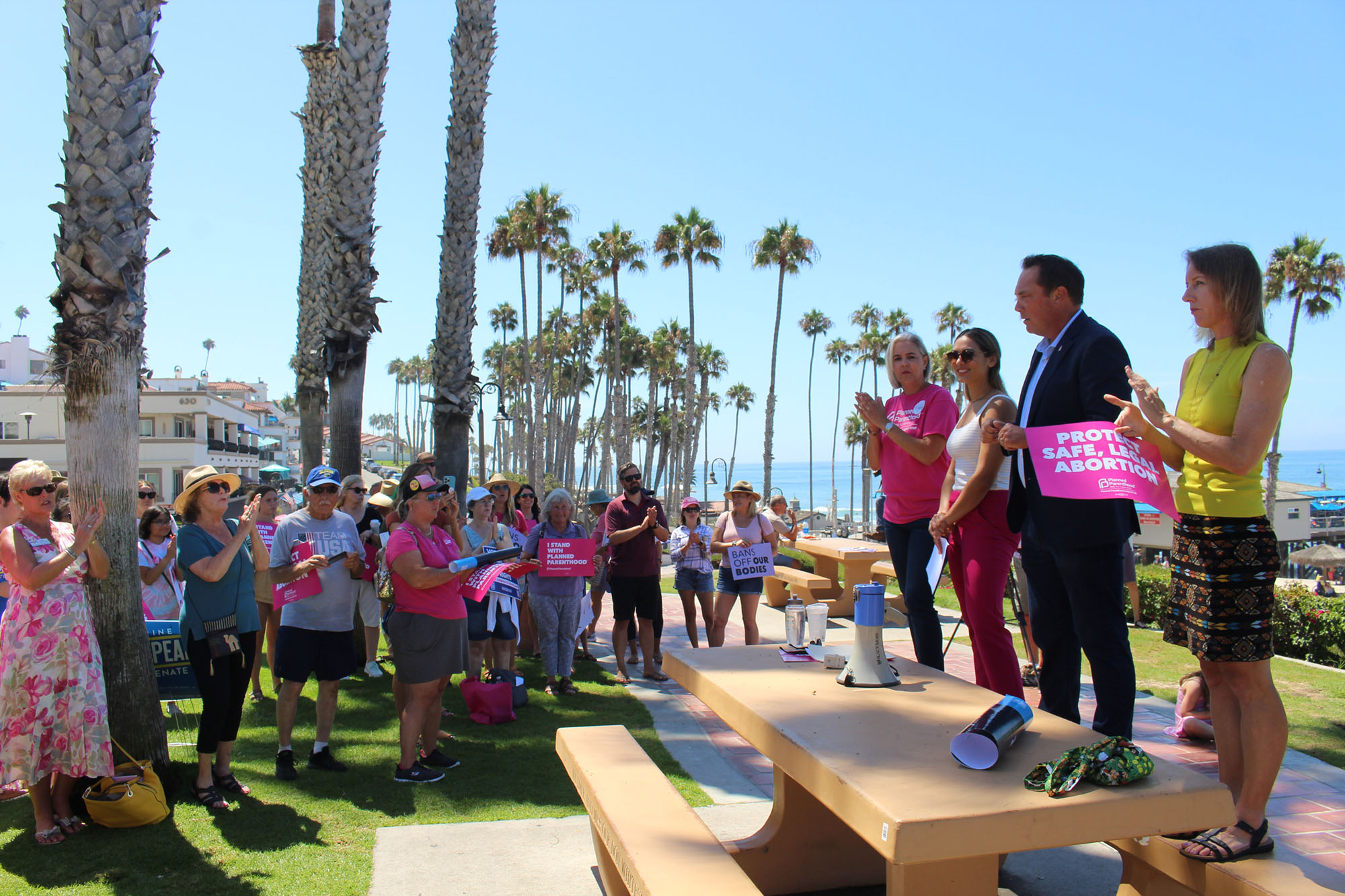 Several candidates campaigning for public office in the upcoming General Election, including current City Councilmember and 74th Assembly District candidate Chris Duncan, spoke about the subject and the recently struck down “Sanctuary for Life” resolution that was proposed in San Clemente.

Duncan said that the rally—scheduled before this past weekend’s special meeting was called to remove the resolution from an upcoming council agenda—was to express the sentiment of residents that women should get to make health care decisions about their own bodies, a topic that will remain relevant beyond the results of the resolution.

“The issue is still very alive, and so it was still pertinent to have a crowd of peaceful, energetic residents here to stand up and voice their support for leaving these critical decisions for women in the hands of women,” he said.

They all thanked the attendees for coming out, expressing gratitude for San Clemente residents who came to Saturday’s meeting in opposition of the resolution that Councilmember Steve Knoblock had proposed.

The public officials also affirmed their stances regarding the importance of women being able to choose for themselves regarding abortion and other topics related to reproductive rights.

“We have people who are saying . . . ‘We want to take away from women that fundamental ability to be in charge of their own destiny, to be equal with men, to be able to have autonomy,’ ” Blakespear said.

Blakespear said it was necessary for all people who have had abortions to talk about their stories in the process of normalizing abortion as health care.

Nearly 25% of U.S. women will have an abortion in their lifetime, according to a 2017 report by Guttmacher Institute researchers, and 60% of women who have abortions are already mothers, according to CDC data from 2019.

Duncan credited the residents who attended the “hastily scheduled, last-minute meeting” on Saturday, Aug. 6, claiming people within the city wanted to sweep the development of the resolution under the rug.

“They didn’t want anybody to notice,” he said, without naming a specific city official. “They were embarrassed because of the outrage of the community, but you wouldn’t let them (escape). Everybody came out in force.”

Duncan was happy that the community’s action stopped such resolutions from spreading beyond San Clemente, saying the opportunity was present to resist political forces attempting to “subjugate women and girls to be second-class citizens” by acting at the lower levels of government.

He also talked about the critical importance of voting and electing people to office who represent the majority’s values, as issues related to women’s reproductive rights will be on the ballot this November.

“Please don’t forget about us at the city level,” said Oddo, echoing Duncan’s message about the importance of local politics. “We are fighting for you; we’re the ones on the ground, we are the ones going door to door.”

Oddo then thanked the pro-choice men in attendance, stating the movement would need everyone’s help, and called for people to get involved and vote.

Andrea Schmidt, the public affairs policy manager for Planned Parenthood Orange and San Bernadino Counties, which organized the rally along with Duncan, commended the community opposition in San Clemente.

She also mentioned that thousands of people use Planned Parenthood clinics for health care, in reference to the proposed resolution’s language that stood against the establishment of such a facility or a similar one in the city.

Schmidt called attention to the movement across the U.S. as state legislatures and court systems have increased their efforts to limit abortions following the Supreme Court’s June 24 overturn of Roe v. Wade. Full bans on abortion exist in 10 states, while four more states ban abortions at the sixth week of pregnancy, according to the New York Times.

“So, we know that there is a devastating reality that patients and abortion providers across the country are currently facing, especially those patients who are unable for so many reasons to travel out of their home,” she said.

She added that the resolution proposed in San Clemente should remind people that they are not automatically safe by living in California, in which abortion is currently legal, and that they should pay attention to all levels of government.

One of the people who attended Wednesday’s rally was Laguna Niguel resident Debbie Salahi, 65, who shared the news of Saturday’s special meeting with several people after learning about it from Planned Parenthood’s emails.

She said she was happy to see the resolution struck down and feels the next step in the fight for reproductive rights was voting for Planned Parenthood-endorsed candidates.

Alyssa Hull and Sanjana Khurana, both 18-year-old residents of Irvine, decided to travel to the rally after Hull learned of it through a friend. The two were disappointed when they heard of the pro-life resolution, believing such a development wouldn’t happen “right next door.”

“You think California is a safe space,” Khurana said. “When you hear stuff like this, that they’re trying to ban abortion within a city, it’s just absurd.”

Khurana felt the Roe v. Wade decision should have been codified years ago, to prevent it from being overturned, and that its reversal broke her heart because of its historical importance when she learned about the subject in school.

She added that holding rallies and spreading awareness of the topic would constitute the next step in securing reproductive rights, although she felt abortion shouldn’t be a political matter.

Hull echoed Khurana’s point about learning of Roe v. Wade while the two were seniors in high school.

“One of my essays I had to write about is how Roe v. Wade is going to be long-standing, and then it’s, like, seconds after, I swear, it was overturned,” said Hull. “I think the next step definitely would be electing more pro-choice candidates.”

Duncan said reproductive freedom, including access to birth control products and contraception, is “incredibly important,” especially as supporters of the stance could not reliably trust the Supreme Court following its decision.

He reiterated that gun control and other safety measures, as well as abortion rights, will be on the ballot in November, and that citizens must campaign and work together to get people elected who represent their values.

“I’m not sure what the next battle is, but I know who the warriors are, the same warriors that are out here today,” Duncan said. “I think it really comes down to one thing. We can’t control what the Supreme Court does, but we can control who we elect.”

If elected to the 74th Assembly District, Duncan said he would wait for the results of Proposition 1, which was placed on the ballot by a Senate Constitutional Amendment after it passed both chambers of the California legislature in June, to determine his course of action.

Prop 1 would amend the California Constitution to read that the state will not deny an individual’s reproductive freedom, such as the right to an abortion or to contraceptives.

“I think I’ll wait to see the results of that, and then we’ll start working on other protections for women’s rights,” he said.