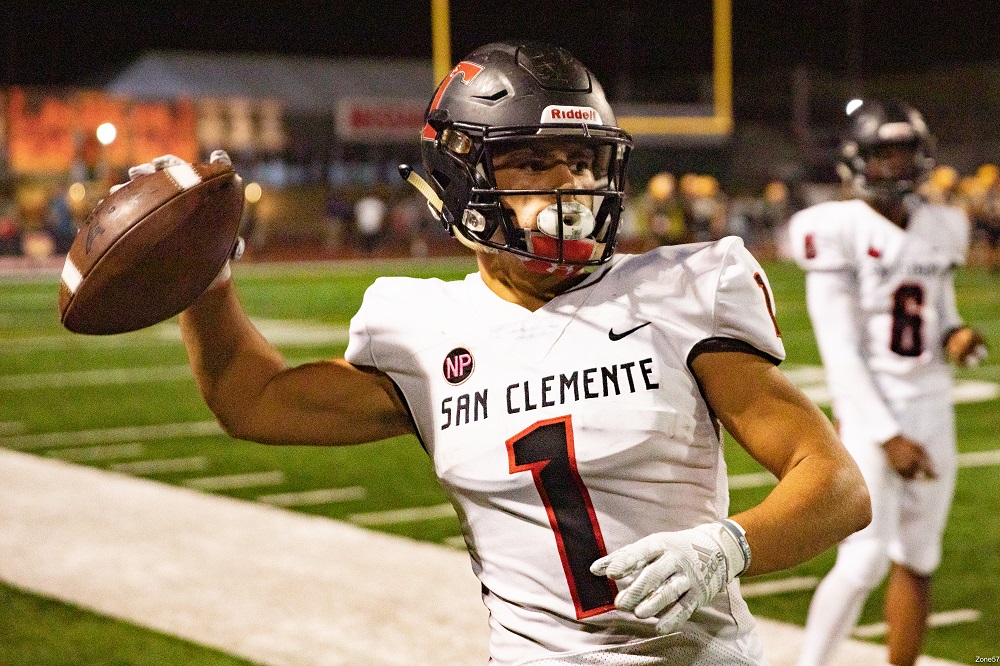 Three San Clemente senior football players officially made their college choices on Wednesday, Dec. 18, the first day of the three-day early signing period for football, by signing their National Letters of Intent in a ceremony at San Clemente High School.

The regular Signing Day is Feb. 5.

Rex follows the family tradition by signing with BYU. Preston’s older brother, Isaac, just completed his freshman season as a tight end at BYU after serving his Mormon mission in Samoa, and Rex’s father, Byron, played tight end at BYU from 1990-92.

Rex has gotten things done both ways in his time at San Clemente.

This season with the Tritons, Rex led San Clemente in receiving with team-highs in yards (445), catches (43) and touchdowns (7), while racking up 53 tackles and two interceptions on defense. For extra measure, Rex finished with a perfect completion percentage: 2 for 2 for 26 yards.

As a junior, Rex caught 35 passes for 361 yards and four touchdowns, while amassing 43 tackles with four interceptions.

Smith continues his career in the Division 1-Football Championship Subdivision at Drake University after coming on defensively in his senior season.

Smith was primarily a wide receiver as a junior, contributing 40 catches for 571 yards and three touchdowns. Smith kept that role as a senior, but he also showed off his athleticism by trying his hand at defense and really taking to the cornerback position.

As a senior, Smith caught 32 passes for 347 yards and two touchdowns, but he added 25 tackles and two interceptions as a cornerback.

Smith also boasts a 4.2 GPA as a true example of a student-athlete.

Thompson has been a special-teams standout for San Clemente and will continue kicking for the Navy.

This season, Thompson was a perfect 37 for 37 on extra-point kicks and knocked in 9 of 10 field-goal attempts, with his longest at 45 yards. Thompson was also money on his kickoff attempts. San Clemente coach Jaime Ortiz before the season said it was “touchback city,” referring to the frequency of kickoffs Thompson sent to the end zone.

As a junior, Thompson hit 48 of 50 extra-point kicks and converted 6 of 8 field-goal attempts.