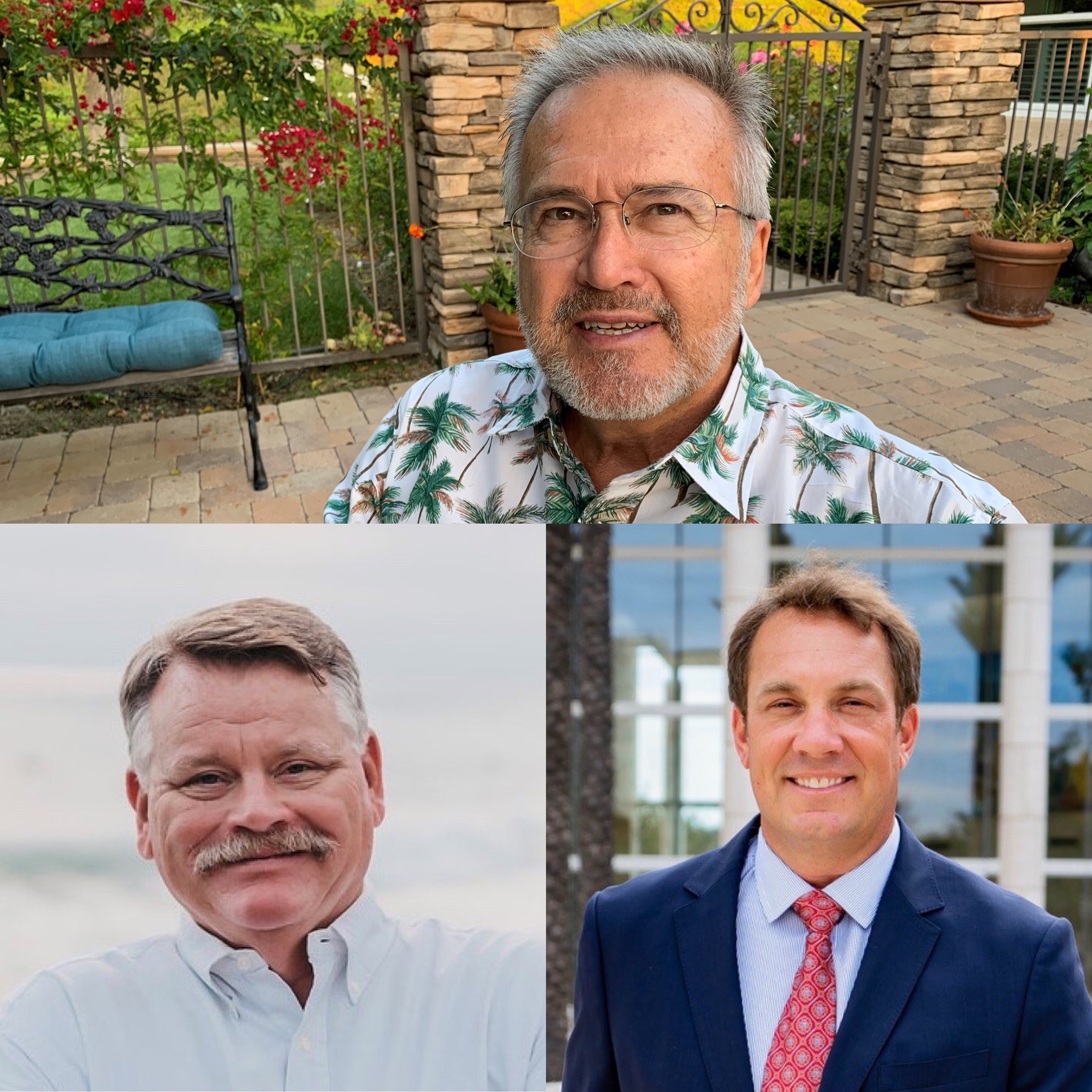 Chris Duncan will likely have a seat on the San Clemente City Council next month, joining incumbent Councilmember Gene James, who appeared to secure his hope of reelection, as both candidates were the projected winners of the local race for the two four-year seats during Tuesday’s General Election balloting.

Steven Knoblock, seeking a third seat on the dais, was the apparent winner of the Special Election race to fill the two-year seat vacated by former Mayor Dan Bane, who stepped down from the council this past April.

Based on the most recent results from the Orange County Registrar of Voters on early Wednesday morning, Nov. 4, Duncan and James lead the crowded field of 10 General Election candidates, ranking first and second, respectively.

“Were very encouraged with the results, and, yeah, we feel pretty good with finishing at least with the top two, Duncan told San Clemente Times of his campaign on Wednesday morning.

“The credit goes to my family, my team, largely consisting of my campaign manager Kevin Sabellico and all of my supporters in my community who really worked hard to get my message out to let voters know what I stood for, which is San Clemente families,” Duncan added.

James echoed Duncan’s sentiments, stating that he was “humbled to have been selected by the voters in San Clemente to serve them for another four years.”

“I’m proud of my campaign, proud of the campaign that we ran. We stayed above the fray, focused on winning the election, focused on the right things,” James said, adding: “I think we did everything that we needed to do to get the results we got last night.”

At press time, Duncan led the race with 19.12% of the vote, collecting 9,534 votes. James wasn’t far behind, collecting 9,289 votes, roughly 18.6% of the votes tallied. Throughout the night on Tuesday, Nov. 3, Aaron Washington maintained a third-place spot, with 16.6% of the vote as of Wednesday morning.

Bill Hart and Charlie Smith were looking at finishing in fourth and fifth place, respectively, in the General Election council balloting.

While Duncan and James maintained the top two spots throughout Election Night on Tuesday, the Special Election race saw a surprise lead change late in the evening, after Donna Vidrine had led the contest in the early results before Knoblock jumped ahead.

Not ready to celebrate quite yet, Knoblock said he’s waiting to see the final results, “but it’s looking good.”

Touching on Vidrine’s early jump to the top of the race, Knoblock compared the situation to “taking a photo of a horse in the first quarter of a race.”

“Until the votes are certified, it could change,” he said.

“I’m pleased that it appears as though I have an opportunity to serve our wonderful community,” Knoblock said, adding that “there’s been some division in the past, and I think it’s important that we all work together and make sure our community stays safe and vibrant and a wonderful place we enjoy living in.”

Duncan offered a similar message of unity for the council. He noted that he and his fellow candidates in the races had led spirited and positive campaigns built around the issues of the town.

“I plan to consult with them, reach out to them, always have an open door, to talk with them, (as well as) community leaders, to talk about issues in the community,” Duncan said. “And I will be a councilmember for the entire community, whether they voted for me or not.”

For Duncan, he said his focus while in office will be on the issues on which he ran: protecting the environment—especially the beaches—supporting the public health of residents, and crime prevention.

In terms of public health, Duncan said that will largely require him “being a leader in our community” to “reinforce safe measures to ensure that we limit the effects of the coronavirus while keeping small businesses open. I think that’s key.”

And as for his public safety policies, he said that will entail “being smart on crime and working closely with the (Orange County) Sheriff’s Department to ensure that every member of the community is protected, including our most vulnerable members.”

James said his priorities would include continuing to fight plans of extending the 241 Toll Road through San Clemente, calling it a “clear and present danger for the city.” He also said that he would continue to focus on public safety and fiscal accountability, namely reducing the city’s $45 million unfunded pension liability.

“We need to start paying that $45 million down,” he said. “It’s incredible that we’ve allowed it to grow to that amount, and the city certainly doesn’t have a balanced budget until it pays all our debts . . . it’s just looming there, and it’s growing.”

San Clemente’s elected officials to the city council will soon be limited to serving for only two consecutive terms, as voters on Election Day overwhelmingly supported the local ballot measure to impose term limits.

As of Wednesday, Nov. 4, Measure BB was poised to pass, receiving 78.14% of the vote, or 24,185 votes. More than 6,760 votes were cast against the measure, according to the Orange County Registrar of Voters’ latest tally.

The measure will limit council seats to two consecutive four-year terms, but a councilmember could serve again after a two-year lapse in service.

The positions of city treasurer and city clerk were also up for election this year. The incumbents for both seats, City Clerk Joanne Baade and City Treasurer Mark Taylor, ran unopposed.

Baade was first elected in 2008 and is set to serve her fourth consecutive term. Taylor will serve for a second term after first being elected to office in 2016.