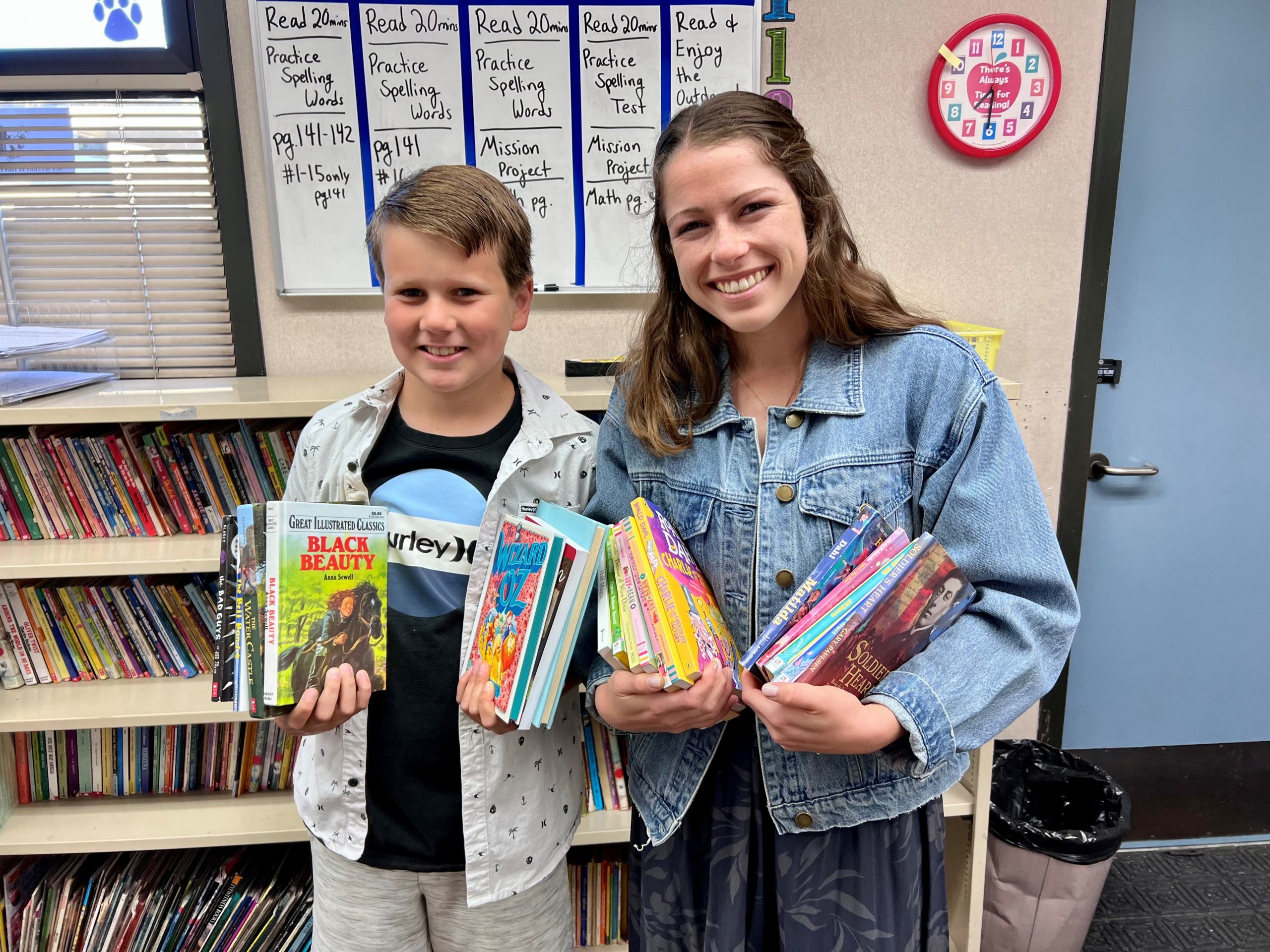 A San Clemente elementary school student recently took it upon himself to start a fundraiser to add new books for his class library, and greatly helped his teacher in the process.

Connor Brown is in Kira Nemeth’s fourth-grade class at Truman Benedict Elementary School. Nemeth took over the class full-time in January, replacing a retiring teacher, after she had been student teaching there for the first half of the 2021-2022 school year.

“It was honestly a really easy transition,” Nemeth said, although noting the class was sad to see its former teacher leave. “The students are a great group of kids, and so they received me with open arms.”

While cleaning the class library with a friend, Connor noted the books on the shelves were old and in tatters, and thought it would be a good idea to replace them.

He figured that he could help his new teacher and take some of the load off her plate of responsibilities.

“I thought it would be nice to be a kid who helps out,” Connor said.

He then went to his parents with the idea of a fundraiser to get new books, including rewarding his classmates with candy if they gave a dollar to buy a book or donated one from their homes. While they were unsure of how his plan would go over, they encouraged Connor to ask his teacher.

The next day, he came home after school, excited that Nemeth had allowed him to get the initiative going.

Connor’s actions fit with his character, as his mother, Lori, calls him her “little entrepreneur,” who has always had big ideas.

Additionally, he has been selfless and a help around the classroom, which makes sense why he was the first to initiate getting new books for the library, according to his teacher.

“I think when he saw that there is a need for an update in our library, he wanted to take that on and take some leadership and ownership,” Nemeth said. “I think that that just speaks to his character of being very generous, kind and giving.”

The next step was making a flyer on Google Docs to bring to school on March 4, to show all of Connor’s classmates before the fundraiser started the following week on March 8.

Between that time, Connor and his father went out to buy candy, with Connor spending three weeks of allowance, or $30, to get ready.

On the day the fundraiser began, Lori admitted, she had doubts that the other children would remember to bring in donations or that the parents would be willing to contribute, but the day’s total was $21 and 10 gently used books. Those numbers grew to $112 and 21 books by the next week.

“It felt really good, because I knew people would do it,” Connor said of receiving his classmates’ support.

He also said he felt amazing and really happy when Nemeth thanked him for all his efforts.

The next step will be purchasing books that the class chose, such as the I Survived… series, Weird but True Know-It-All: Rocks and Minerals, and The Lemonade War.

Nemeth said reading is one of the most important things children can do, because it exposes them to new concepts.

“It just enriches their learning,” she said. “I think kids can go to a different world while they’re reading, and they can also read about things that interest them as well.”