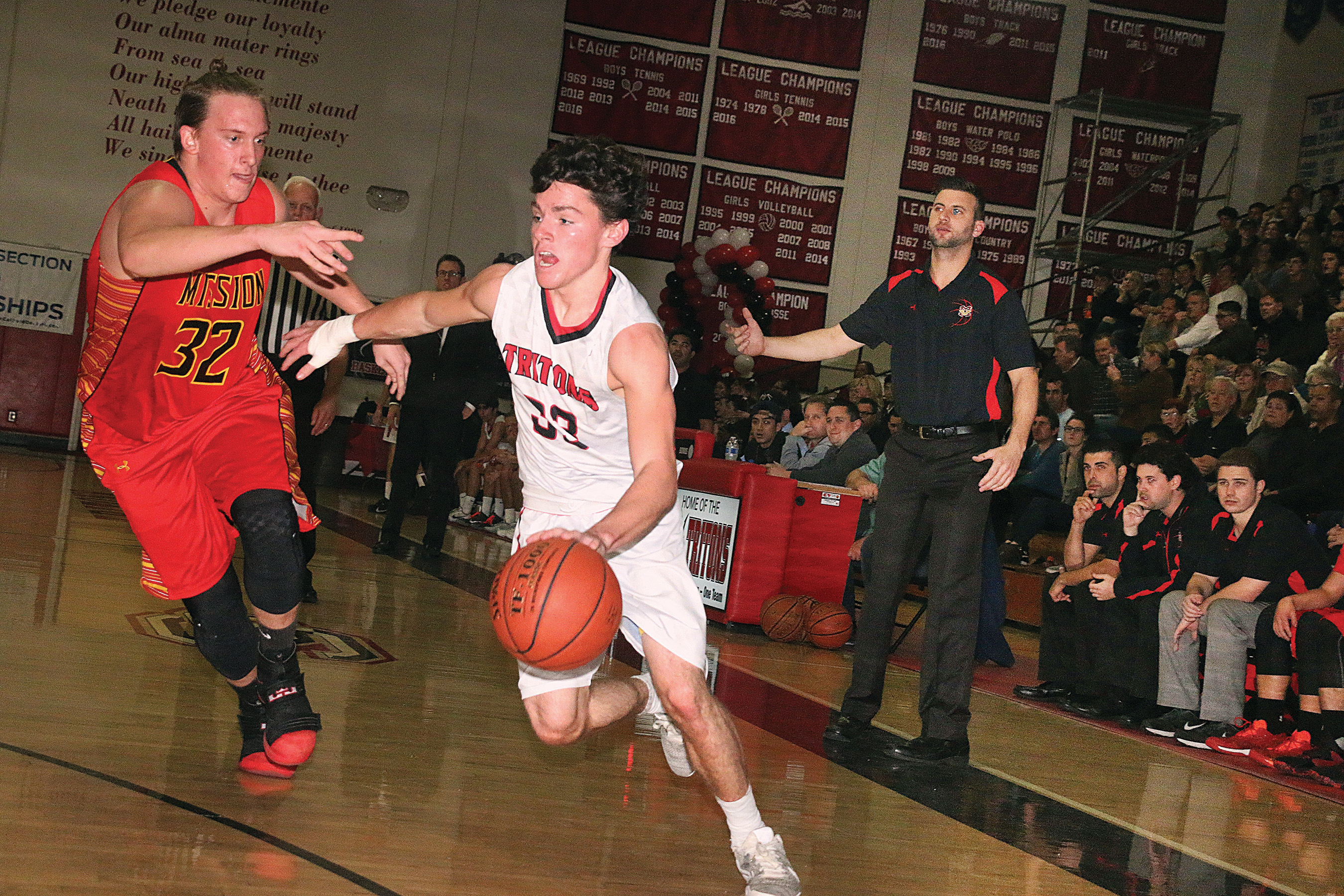 With so many things going on in his life, it’s hard to understand where Blake Birmingham has time for basketball.

The 5-foot-9-inch senior guard is enrolled in several AP and International Baccalaureate classes on campus. He’s in the National Honor Society and Best Buddies program, leader of the Loud Crowd student cheering section, and is the president of the Fellowship of Christian Athletes.

He’s also the senior class president, carries a 4.65 GPA and is preparing to study biomedical engineering in college.

But somewhere in between his 10-hour days at school, Birmingham has time for hoops.

He is the unquestioned leader of the San Clemente High School boys basketball team, where he is averaging a team-high 19 points, three rebounds, two assists and nearly three steals per contest while running the show at the point guard position.

Birmingham’s season-long effort helped spark the Tritons to one of their more memorable regular seasons in recent history, which ended with the Tritons winning a third straight South Coast League title on Feb. 7.

San Clemente will play Downey in the first round of the CIF-SS Division 1A Championships on Wednesday.

The Tritons began the year with just a handful of experienced players on the roster, and most of those players would not join the team until the football season was over, which ended up being 11 games into the schedule.

Could the Tritons stay above water while they waited for reinforcements? Would they be able to put themselves in position to contend for a playoff spot?

Turns out the answer to both of those questions was “yes,” and Birmingham is a big reason why.

Birmingham, a sweet-shooting lefty that wants to play for interested schools like MIT, Cal Tech or Johns Hopkins, caught fire early in the season. He scored at least 19 points in his first five games, including 29- and a 37-point efforts in wins over Fullerton and El Dorado on Dec. 1 and Dec. 3, respectively.

Birmingham is one of the hardest workers on the team, according to coach Marc Popovich. He was able to get his teammates to rise to the occasion in the early going by mixing his determined work ethic along with a natural positive energy, which never wavers.

“Blake is everything. He’s our engine,” Popovich said. “He’s the one that pulls everyone else along with him and makes sure everyone is up to his standards.”

Senior guard Roberto Medrano knows all too well Birmingham’s ability to motivate. Medrano met Birmingham when the two were in seventh grade. They became fast friends and have been on the same club and high school basketball team ever since. They’re gym rats and have spent hours practicing against each other at the local 24-Hour Fitness, constantly striving to develop their games.

“I’ve always used Blake as a measuring stick (for myself) in practice,” said Medrano, who is averaging nearly 10 points per game. “On the court he’s very competitive. His demeanor resonates with the rest of the team and everyone feeds off of it. He makes us want to play harder because you know he’s going to be playing his best 24/7.”

Before games, Birmingham’s mind is in a state of constant visualization. He thinks about the game plan, what his shots will look like, or how he wants to run the pick and roll so when he steps onto the court, he’s ready for anything. When he’s not in scoring mode, he’s always scanning the floor looking to get his teammates going, or looking for the right spot to be in when the defense rotates.

“I’ve been taught to always think two steps ahead,” Birmingham said. “During games I try to see things before they happen.”

There have been countless times this season when Birmingham’s smarts and basketball IQ equated into a positive play for the Tritons. The last three minutes of the Tritons’ final game of the regular season on Feb. 10 is as good an example as any.

Mission Viejo was up on the Tritons for most of the game, but a late 3-point barrage by forward Isaac Rex put San Clemente up by four with about a minute to go. Birmingham received an inbounds pass and was fouled, and he went to the free throw line. He calmly knocked down both shots, increasing the lead to six.

Instead of trailing back and setting up in a half-court defense, he stood his ground. He hung back, and dove headfirst for a lazy inbounds pass that was rolling on the ground toward the Diablos’ point guard. Birmingham scooped it up, rolled onto his back and called timeout, putting the game out of reach for good.

It wasn’t the most memorable play of the game, and it didn’t put any points on the board, but it was the play the Tritons needed at that moment. In other words, it was a Blake Birmingham play.