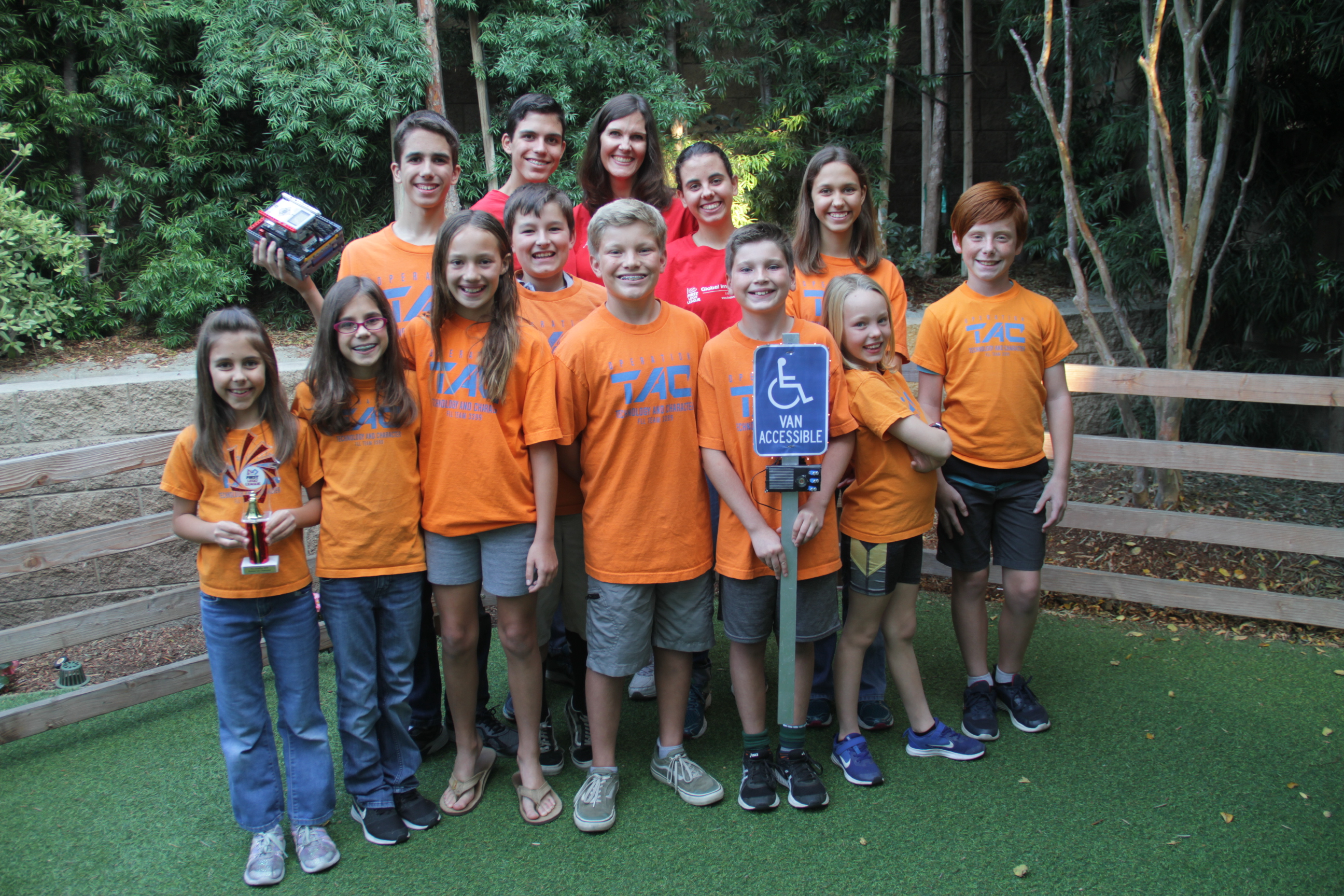 A team of young, aspiring engineers from South Orange County will head to LEGOLAND next month, when they’ll take part in an ongoing robotics competition and present a device they developed intended to protect the mobility of disabled individuals.

Earlier this month, Operation Technology and Character (TAC) earned second place nods in the FIRST LEGO League’s regional qualifying tournament, sending them to the state competition on Dec. 7 and 8.

FIRST LEGO League is a global robotics competition aimed at getting kids and teachers engaged in science, mathematics and technology through team-building experiences, as well as engineering and innovation.

Every team in the competition is challenged with coming up with a solution to a real-world problem. The competition’s theme this year was City Shaper, revolving around buildings and public spaces in the community.

For Operation TAC, that meant addressing a concern many disabled individuals in wheelchairs come across in parking lots—a misuse of the striped van accessible aisles.

“Our problem occurs in the van accessible aisle. When a vehicle parks in the blue lines, it blocks a wheelchair ramp from being used,” the team said in a group presentation to San Clemente Times. “People with wheelchairs already have so many challenges, getting in and out of their car should not be one of them.”

The team’s solution: a device they created called “Hear My Voice,” which uses motion sensor technology and a voice delivery system. If a car illegally parks on the access aisle, the device, which is stationed on the Van Accessible sign, kicks on and alerts the driver to move the car.

According to the team, three ultrasonic sensors monitor different spots on the van accessible aisle. The device is triggered when a car is parked over the blue lines for more than 10 seconds, setting off a recorded audio message instructing the person to relocate.

The message, as well as flashing lights around the van accessible sign, will continuously run until the vehicle has been removed from the aisle. The team also noted that the device is “solar powered, easy to install and affordable.”

“We are confident that when the public knows and understands the problem, violations will dramatically decrease, and the quality of life for the disabled will significantly improve,” the group said.

The Americans with Disabilities Act (ADA) requires the blue-lined aisles adjacent to handicapped parking spaces to be a minimum of 5-feet wide. The aisles next to van-accessible parking spaces are to be at least 8-feet wide, giving ample room for a person in a wheelchair to get on and off a ramp from the car.

According to BraunAbility, a manufacturer of mobility products for wheelchair users, many of its customers have encountered instances of cars illegally parked on the access aisles.

According to a survey the company conducted, 74% of people have witnessed improper use of accessible parking. To combat the issue, the company recently rolled out its 3D access aisles, which use paint to create an optical illusion of raised barriers on the aisle.

“The goal of our 3D access aisles was to capture attention, educate the public and inspire conversations and ideas around how to prevent further misuse,” Wegner said in an email. “Seeing these students take up this cause is so exciting, especially because so many people overlook issues like this that don’t affect them on a daily basis.”

While the 3D access aisle is intended to bring attention to the issue of misuse, the kids of Operation TAC, which reached out to BraunAbility, as well as other experts, for the project, wanted their solution to also educate the violator.

“Our goal is to do four things: put peer pressure on the violator to move their car; to educate the public on the van accessible aisle; encourage bystanders to share the violation on social media to raise public awareness; and support the disabled community by being a voice for them,” the team explained.

The team, which is sponsored by companies and organizations including Lowes, FaceFirst, Inc., Winchell Chiropractic and Brandon Orthodontics, chose to create “Hear My Voice” in honor of the Sommerville family from San Clemente.

The Sommervilles, whose children are bound to motorized wheelchairs, have regularly come across instances of cars misusing the aisle.

“They’ve been struggling with this problem for a long time. . . . They need the ramp, but when the car parks in the lines, they can’t get out,” the team explained, adding: “They deal with this problem every single day.”

Because the project was inspired by the Sommerville family, the team had Derek Sommerville, the father, provide the voice that’s heard when the device kicks on.

Another aspect of the robotics competition is the for the team to present a robot they designed and built with LEGO Mindstorms that go along with the City Shaper theme. If the team wins the competition at LEGOLAND next month, they’ll be able to move on to the championship in Houston, where they’ll compete for a chance to win $20,000 to implement their project idea.