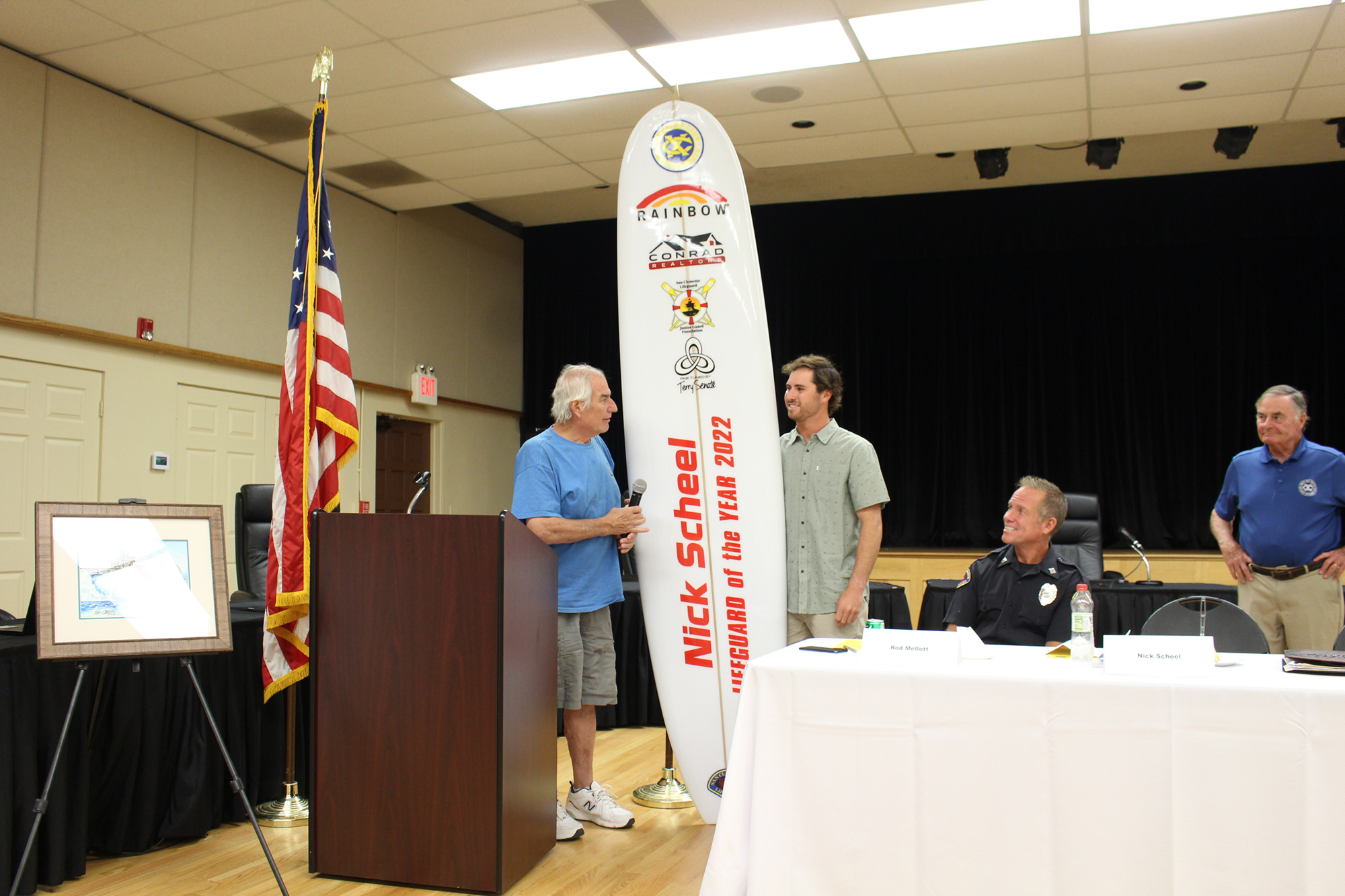 Elected officials, members of the San Clemente Exchange Club, Marine Safety division staff and other community members were on hand at the Community Center on Thursday, Sept. 15, to see the 2022 Lifeguard of the Year recognized.

Division personnel voted to honor Nick Scheel, who has served the city in various roles since 2015, and recently graduated from the University of California, Santa Barbara with a degree in environmental studies.

Marine Services Capt. Rod Mellott said Scheel was deserving and long overdue for the award, as an “amazing lifeguard” who leads by example, and can handle heavy workloads and tasks.

“It doesn’t matter what role he takes—rescues, treating patients, enforcing ordinances, interacting with the public or teaching younger guards,” Mellott said. “He’s always been a leader. On any day, no matter what he’s faced, without hesitation, Nick is ready for action.”

Mellott on Thursday shared a story about Scheel rescuing a distressed 10-year-old swimmer in early June at Capistrano Shores—an area outside San Clemente Lifeguard Services’ purview. His actions earned him recognition from the City Council on June 19, as well as an emotional show of gratitude from the rescued child’s family.

Mellott also provided an overview of what the lifeguards are responsible for, including Scheel’s role as a supervisor, in terms of using little technology in the digital age to observe swimmers, look for signs of distress, cooperate on rescues, work with public safety agencies such as the Orange County Fire Authority and Orange County Sheriff’s deputies and enforce ordinances.

Such proficiency and excellence have resulted in 22,000 swimmer rescues over the last 10 years with no lives lost, even with around 2.5 million visitors to San Clemente beaches yearly, according to Mellott.

“With operations being so dependent on our staff, outstanding lifeguards such as Nick are vital to our success,” he said.

Success was not an unfamiliar term to Scheel. Mellott listed off the awardee’s accomplishments as a top-ranked professional stand-up paddler, winning the Open Paddle race event at the 2022 Ocean Festival, and winning the 2015 “Rookie of the Year” recognition for the San Clemente Lifeguards, as well receiving the “Unsung Hero” award in 2017 and 2018.

Mellott teared up as he congratulated Scheel on his award and thanked him for his professionalism.

Scheel also received a Dick Hazard Award from the Conrad Realtors family, a custom Terry Senate surfboard inscribed with his name, a custom piece of art painted by local artist Kelan O’Brien and a mayoral challenge coin from Mayor Gene James during the event co-sponsored by the Exchange Club and Rainbow Sandals.

The event wasn’t just to recognize Scheel, the awardee said, but the work of all San Clemente lifeguards. He remarked that the responsibility of lifeguarding is interesting, as it requires young minds to handle everything thrown their way in the midst of a demanding position.

“We always arrive first and have to figure it out,” Scheel said. “We sacrifice a lot, too, for the job, namely time with friends and family, but I think I speak for everyone when I say the work we do is really fulfilling and, clearly, it’s appreciated.”

He spoke about barely making the tryout when he was 16 years old and didn’t know what he was getting into, and added that he was thankful for the experiences, mentors, and skills being a lifeguard has provided.

Scheel said he has been shaped into a better, more motivated person, and thanked each person in the Marine Safety division with whom he has worked.

“I really wanted to shout out those senior guards who (took) me under their wing when I first started out,” he said. “Who I am today is because of all those people, and I’ve done my best to pass on that same knowledge to the next generation.”

Scheel added that he was excited to join the names of many friends who were also engraved at the headquarters building, and thanked his family and all lifeguards who were working at the beach and protecting beachgoers.