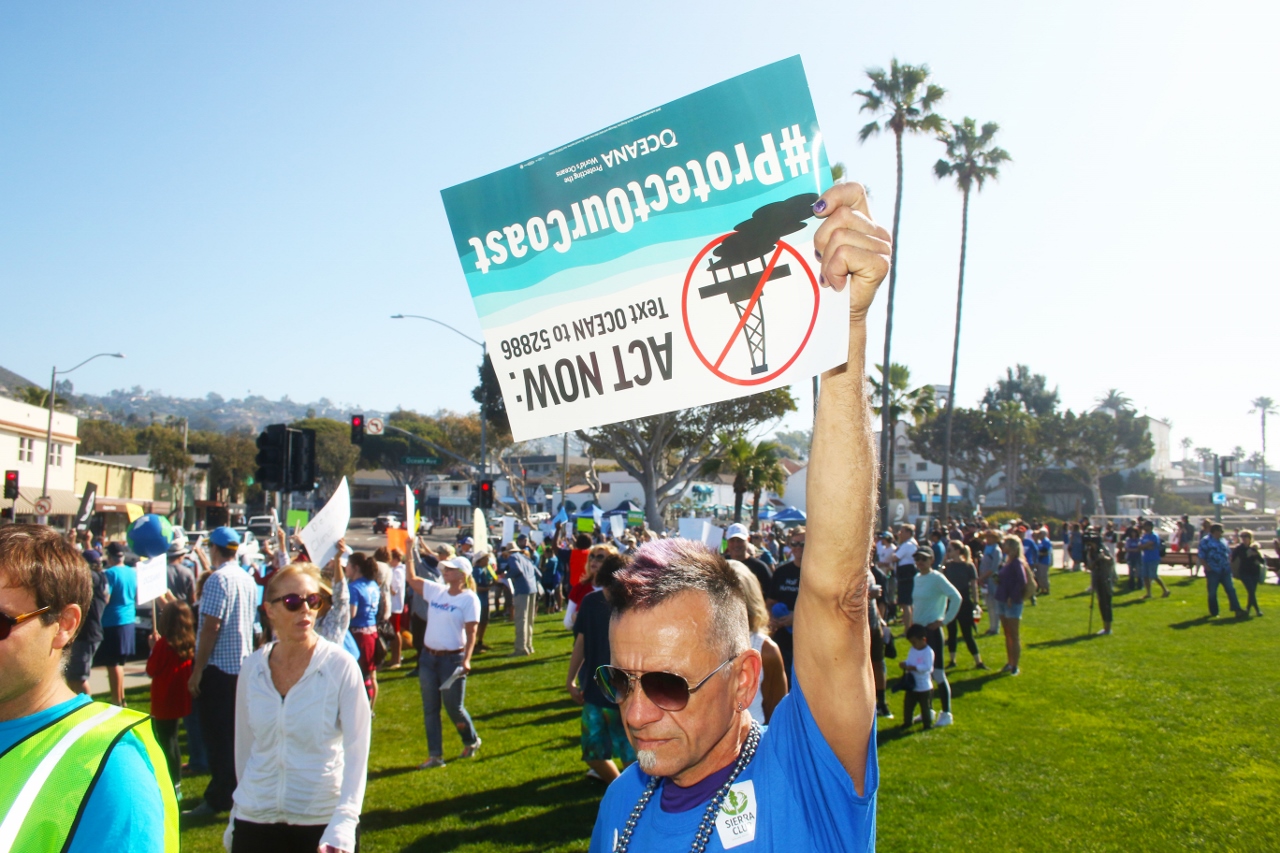 People with colored signs lined the edges of Pacific Coast Highway, all with some kind of message stating increasing offshore drilling in California coastal waters would not be welcome.

On Feb. 3, hundreds of protestors gathered at Main Beach in Laguna Beach to oppose a proposal from the Trump administration’s Department of Interior (DOI) to open offshore drilling in U.S. waters, just several miles from the shore.

The proposals would allow for five-year leases from 2019-2024 for oil and gas exploration and extraction. Most of the areas mentioned in the proposals are along the outer continental shelf of the U.S. The proposal was drafted by the Bureau of Ocean Energy Management.

Trepidation commonly grows among environmental factions whenever any kind of new oil drilling is proposed, let alone making the oceans fair game. With devastating incidents like the Exxon Valdez oil spill in 1989 and the BP spill in the Gulf of Mexico in 2010, among other possibilities as precedent, there is a lot of concern among them. The proposal also contrasts these organizations’ efforts to promote “green” energy.

Many people who attended the Feb. 3 protest in Laguna Beach dressed in “oil”-covered jumpsuits to convey their message about effects of opening offshore oil and gas extraction. Photo: Eric Heinz

“(Trump) wants to open 90 percent of U.S. waters, which is a terrible idea and disastrous overreach,” Surfrider Foundation CEO Chad Nelsen said during the event. “Coastal Communities…around the nation have nothing to gain and everything to lose from this.”

“We don’t need (offshore oil drilling) for jobs. We don’t need it for the economy,” Nelsen said, adding that he wants to create a “huge wave of activism” across the nation.

The proposal is part of President Donald Trump’s “America-First Offshore Energy Strategy” that was part of an executive order in April to “encourage offshore energy exploration.”

Almost every governor of states where Pacific Ocean offshore drilling would be near have opposed the proposal.

“For more than 30 years, our shared coastline has been protected from further federal drilling and we’ll do whatever it takes to stop this reckless, short-sighted action,” California Gov. Jerry Brown said in a Jan. 4 statement.

Interior Secretary Ryan Zinke was quoted in The Washington Post on Jan. 4 at a news conference, saying there’s still time to weigh in on the proposal.

“Nothing is final,” Zinke said. “This is a draft program. The states, local communities and congressional delegations will all have a say” before the proposal becomes final in the coming months.

A public hearing on the proposals is scheduled for today, Feb. 8, in Sacramento.

The protest also drew some celebrity attention, as notable TV and film actor Ted Danson made an impromptu appearance. Danson wasn’t billed in the event’s press release, but spoke against the oil drilling proposals at the gathering.

People can comment on the draft proposal by visiting www.boem.gov/National-Program/. Comments must be received by March 9.