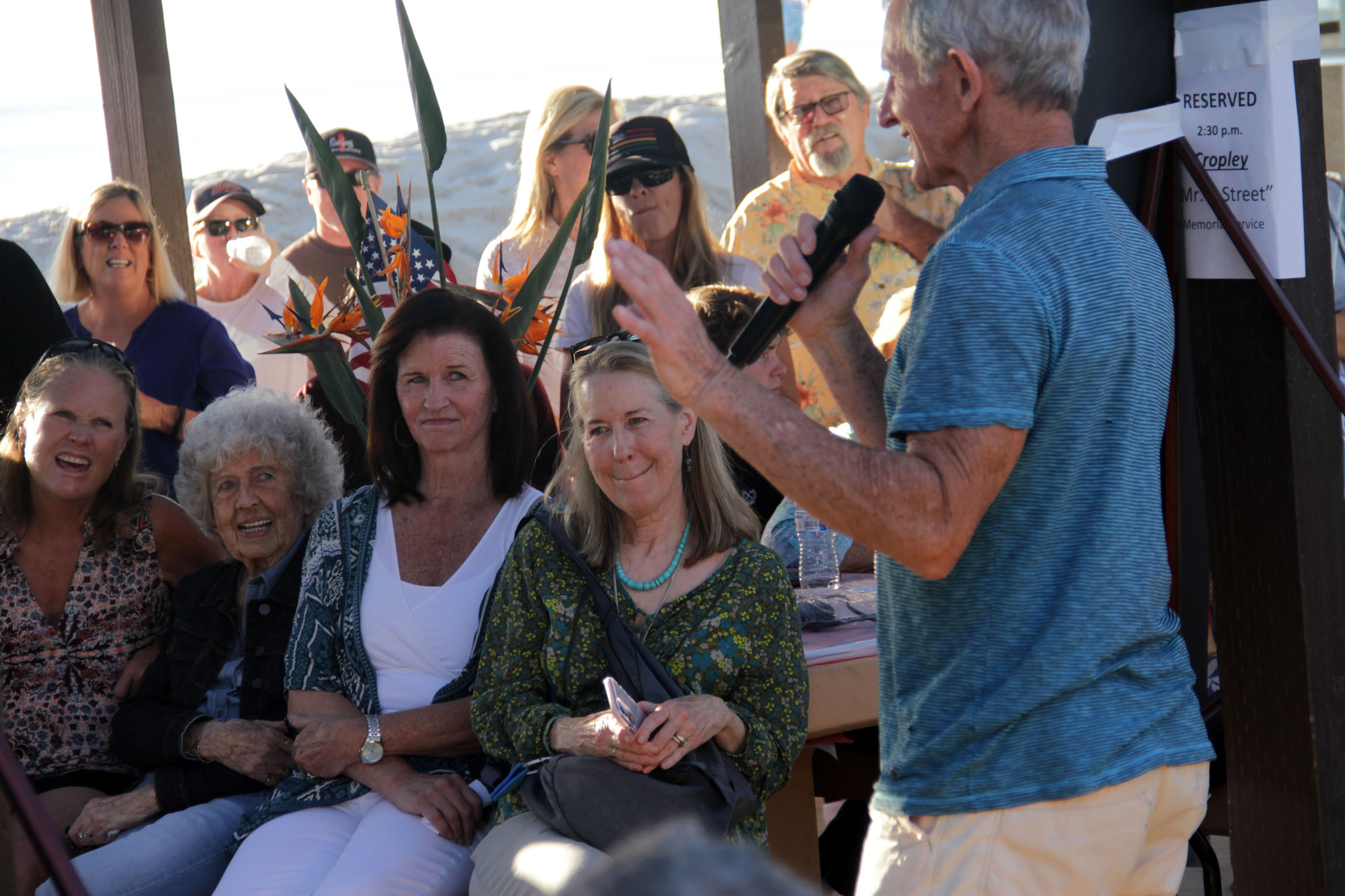 The T-Street concession stand on Sunday afternoon, Nov. 17, was filled with dozens of loved ones who had gathered to memorialize Maj. Richard “Dick” Cropley, the retired U.S. Marine and local icon who died at age 99 last week.

For many in the community, Cropley was known as “Mr. T-Street” as he owned and operated the stand for nearly 30 years, serving up hamburgers to local surfers and beachgoers from 1962-1990.

And to those who knew him best, he was a well-organized military man, who enjoyed a good laugh, cherished his family, caring for their moral well-being, and loved his wife Ann Cropley above all else.

“I would say what he taught us most was to be honest and tell the truth,” Charley Cropley said Sunday of his late father who had died in his sleep on Nov. 11—Veterans Day.

With the three kids, Charley, Terri and Rick, “he raised us as a Marine would,” Charley later added. “We were taught: ‘Yes, sir. No, sir. No, ma’am. May I please be excused?’ He was a strong disciplinarian.”

In honor of Cropley’s legacy in San Clemente, the concession stand cooked up burgers for all those who attended the informal ceremony. The large crowd, met with Ann, offering condolences while reminiscing of the old times—just the way the 20-year Marine pilot wanted.

Rather than hold a formal service, Cropley had suggested that his family host “a nice gathering, weather permitting, on the beach near the old stand for all friends and acquaintances who desire to attend,” Terri Hunt, his daughter, read from a note Cropley and his wife had wrote for their children in case one or both of them had died.

“Perhaps you can arrange for the stand to cater to the crowd,” the note added, which prompted cheers from the guests.

Cropley was an original “Plank Owner” of the VMSB-235 “Death Angels,” a dive-bomber squadron that formed at NAS El Centro, California on Jan. 1, 1943. The squadron flew combat missions in Guadalcanal, Arundel, New Georgia and Balale during World War II.

“After high school, (Cropley) studied flying and learned to fly a plane, and then went to the Virginia Military Institute for two years where he was thrown out after blowing up a guard shack in the center of the school,” Charley recalled with a laugh. “Then he went on from there to become a Marine and become a Marine pilot.”

Cropley piloted numerous types of combat planes during the war, including the Vought F4U Corsair and Douglas SBD Dauntless, the San Clemente Times previously reported in its cover story on the pilot’s 99th birthday.

For his birthday on May 31, Camp Pendleton threw Cropley a special celebration as part of the Marine Aircraft Group 39’s change of command ceremony and parade. During the celebration, he received a private tour of an MV-22 Osprey.

“In asking him about the war, he said, ‘you know, I really liked it.’” Charley said. “He said, ‘I got to live the life of a gentlemen on a carrier and eat good food and when it was time to fight we’d go out and fly the planes and come back.’”

After serving during the Korean War, Charley explained, Cropley uprooted the family from their North Carolina home, moving to San Clemente, where they would permanently remain.

“We came here to San Clemente, settled down and the family loved it here,” Charley said. “He chose to pass up further promotions, and stay here, retire here and thank goodness for that. And so we were raised here and then we bought this snack bar.”

While running the snack bar, which he purchased in 1962, he would let some of his grandkids—including Genesis Hansen—work there, allowing them to gain work experience and develop a strong work ethic.

Since Cropley’s death last week, Hansen said she’s gotten notes from several women who had worked at the stand growing up, telling old stories and expressing that working there was the best job they ever had.

“He taught me a lot about work ethic, he could be a taskmaster … you definitely did not give away free food,” Hansen joked. “But he was fiercely protective of his girls … if you messed with one of his girls he’d say, ‘I don’t need your business, get the hell out here and go down to the pier.’”

Speaking to Cropley’s humorous and fun-loving nature, Scott Hunt, Terri’s husband, remembered the rapport he shared with his father-in-law.

“Dick would refer me to me as big, dumb and ugly … it was probably 10 years before he learned my name,” Hunt quipped.

“As much as the stern stuff that Charley said … Dick was a lot of fun,” Hunt said.

In his note, which also explained his desire to be cremated and have his ashes spread out into the sea in front of the concession stand, Cropley stressed that he wanted his three children, as well as his grandchildren and great-grandchildren to become closer as a family.

“Do be happy. And in closing, I want you three … along with all our grandkiddies, great and regular, to get closer and tighter and always be a strong family,” stated the note, which Terri read. “Take care of each other.”