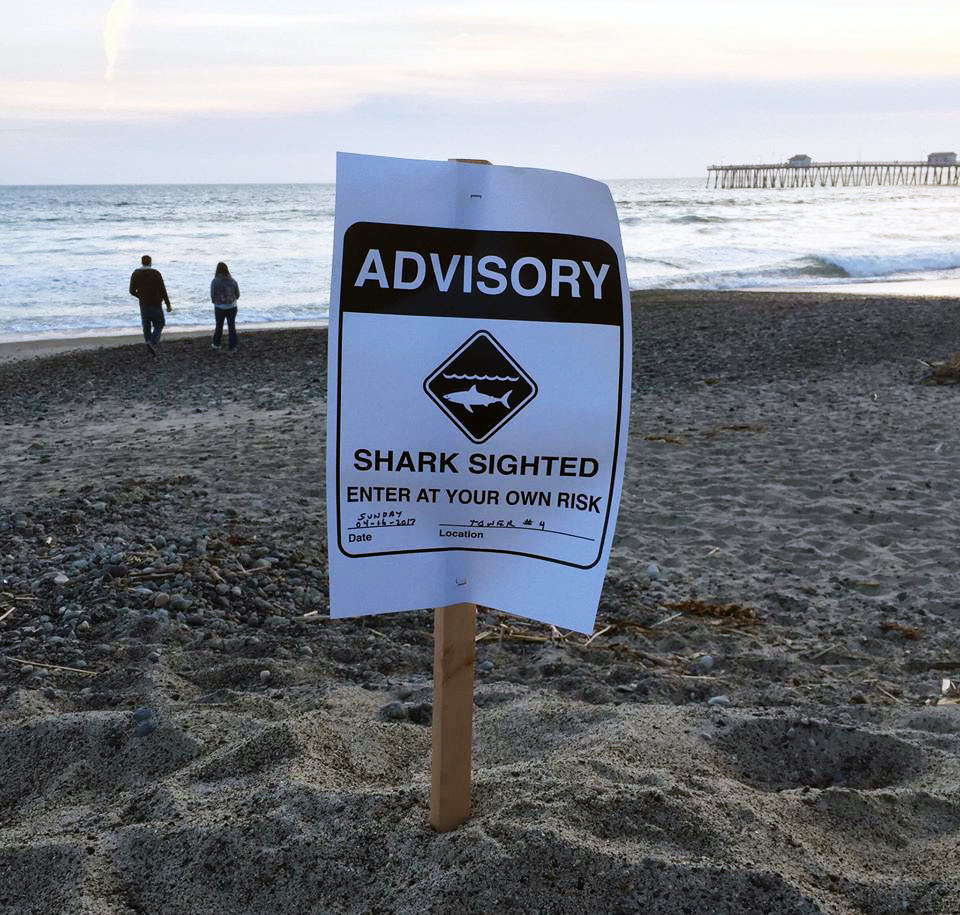 Fearing the Great White Shark: The Most Terrifying of Sharks, Breeching Recently, is as Threatening as a Lightning Strike

On Easter Sunday, a three-foot southwest swell danced on the buoys. The afternoon spring wind laid down as the tide filled in. At Old Man’s, a few hundred yards offshore, pelicans savaged a roiling bait ball.

“I wonder how many sharks are out there?” muttered one of the surfers bobbing in the lineup.

At about that exact moment, a great white shark breeched at Upper Trestles and lifeguard trainees near the San Clemente Pier witnessed another shark swim through a wave. Earlier in the week, Surfline’s Lowers webcam capture imagery of a great white breeching while a group of unsuspecting, midday surfers sat idly by. The video caught internet fire and quickly spread across social media feeds. A handful of other sightings have been reported around San Onofre earlier this year.

So, what the heck’s going on? Are we seeing more sharks in local waters? Is seepage from the San Onofre Nuclear Generating Station creating a generation of nuclear-powered super sharks? Is a sharknado brewing? Are we all gonna die?! No, no, no and no. You wouldn’t freak out if you saw a lion in the jungle in Africa, would you? So why are you freaking out because of an apex predator in the ocean?

Some years ago, I was on a surf trip in Tahiti when I asked the local fisherman driving the boat if there were sharks in the water.

“Dip your finger in the water. Taste it. Is it salty? If there’s salt, there’s sharks,” he bluntly answered.

The point is that there are sharks in every ocean in the world—just like, hopefully, there are fish, and whales, and seaweed and all that other marvelous undersea life. True, there appears to be an increase in sightings and interactions, but there is absolutely no need to buy into the Shark Week fear mongering. In 2016, there were a total of three unprovoked, non-fatal shark attacks in California against surfers. The running average since 1900 is 5.4 attacks per year. The old surfing adage states that you have more of a chance of getting struck by lightning than you do getting mauled by a shark. That’s true. You also have more of a chance of dying from a dog bite or being put to death via legal, state-sanctioned execution.

The fact is, most of the sharks that live in our local waters between Dana Point and San Clemente are bottom feeders. Leopard sharks are quite common in the area. They feed primarily on clams, worms and shrimp—not human flesh. They don’t even have teeth. Sharks such as makos and threshers are often seen in the open waters, especially by area fishing boats, but there is no record of them devouring beachgoers in South Orange County. A couple years back, when the water grew unseasonably warm, there were a handful of encounters with hammerheads, but they were far more the exception than the norm.

That leaves the great white as the obvious candidate for finned super villain, but a deeper dive into the facts illustrates they probably have more to fear from humans than humans do from them (last year a fisherman hooked one off the San Clemente Pier). In a conversation with Leslie Kretschmar at the Ocean Institute in Dana Point, she noted that the San Onofre Trails area, just like Malibu in Los Angeles, is a reputed rookery for great whites.

“They’ve been there for a lot longer than surfers, that’s for sure,” said Kretschmar. “They’ve had ample opportunity to explore all the dietary options at San Onofre, but we’ve never seen that happen… ever.”

This is a key distinction to understand because, by and large, juvenile great whites don’t pose a danger to people. In the early stages of their development, they primarily feed on rays, skates and fish. It isn’t until they grow longer than 10 to 12 feet that their hunting strategies and prey begin to change. An overwhelming majority of the reported shark sightings in our area describe animals eight feet and under.

Historically speaking, there are no records of a shark attacking a surfer in South Orange County waters in the last 30-plus years. In 2016, a woman was bit while swimming off the coast of Corona Del Mar and the last shark-related fatality in California came in Solana Beach in 2008 when a long-distance swimmer was attacked. Previously, there hadn’t been a shark-related death against a surfer in the state in nearly 50 years.

This is not to say that if you go surf Trestles or Salt Creek you are one hundred percent safe. You’re not. Anytime you step into the ocean you’re stepping into the food chain and all kinds of freaky stuff can happen, but having the right perspective and a little background knowledge definitely helps take the edge off.

The city of San Clemente distributed a press release on Wednesday afternoon regarding the sightings. Click here to read the press release

Editor’s note: Article has been updated to clarify data reported.