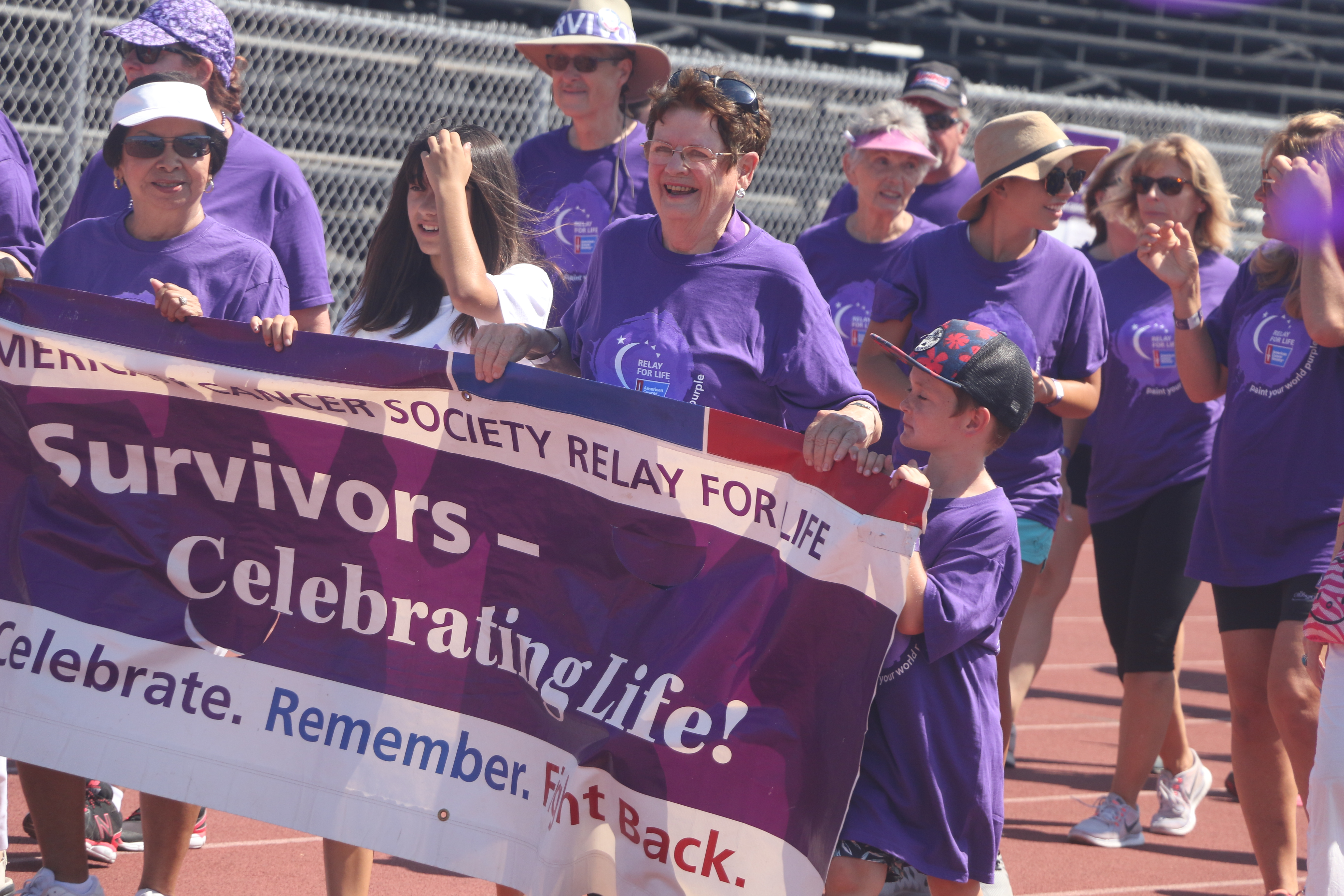 Cancer continues to claim millions of lives each year.

As scientists and society learn more and more about the disease, it still afflicts those closest to us. To help fund the efforts in finding a cure, Relay for Life is held annually at various locations around the world.

According to San Clemente Relay for Life organizers, more than 15 million people participate in events each year worldwide.

Teams of people and individuals walk and run laps in support of the cause, spend the night and do more laps in the morning to complete the 24-hour event.

At night, a slideshow honoring those who died as a result of cancer was shown along with a luminaria.

Brian Hannigan, a co-coordinator of the San Clemente Relay for Life, said the event has grown a lot since its beginning.

“Every year it gets bigger, stronger, and what impressed me is that the young kids who have grown up with the event are now starting to take leadership roles and become more involved in a bigger way,” he said. “Grant Meyer is one great example. He’s been involved since he was a little kid. This year he took the lead as team chair to get out all the information and help get them going. His leadership skills have really come together. He’s a young man now, and is dedicated to this cause.”

Hannigan said there are many other young people who are following the same lead.

“I think what’s most important is we have the funding and the research and it keeps helping, but what’s most important to me is preventing it to begin with, eating healthy, exercising and being of sound mind,” Hannigan said. “Past the point of that is going to American Cancer Society and help find new treatments and cures. I could just post on Facebook ‘I support you,’ or I could come out and really do something about it.”

Hannigan has had firsthand experience with losing loved ones to cancer.

“When I was 5 years old, my father passed away from cancer, but I never forgot him, and that’s a big part of Relay is to celebrate, remember and fight back,” he said. “My mom is a two-time cancer survivor. I have another aunt who is a survivor and I have an uncle who is a survivor. It’s been all around in the family and I have many friends who are going through the same thing.”

Connie Voris, the mother of Saylor Voris, a SCHS student who died from a rare form of cancer in 2015, spoke to audience members during the beginning of the event about Relay for Life and how it helped her and her family.

“We’ve met so many wonderful people and we tried to spread the word about cancer,” Voris said. “I asked Saylor, ‘Why do you like to do Relay for Life?’ And she said, ‘If people can fight (cancer) so hard to survive, we can stay up 24 hours.’”

Voris said she has heard many stories about families who lost loved ones to cancer, and she said she wondered how they moved forward with their life afterward.

“Now I know that these wonderful people, like the ones here today, were the same ones stepping up to help my family and Saylor’s battle with cancer,” she said. “Cancer touches most of all of us, and we have the responsibility to help others. Saylor, Sam and I had no idea those nine years of volunteering for Relay for Life would become our own personal battle.”

San Clemente has hosted Relay for Life at the high school for the last eight years but the event has taken place 14 years. This year, organizers said there were 38 teams that participated in the event to raise money for cancer research.

As of Wednesday, July 27, the event had raised more than $51,000 from San Clemente’s event, according to the Relay for Life website.

Dave Robinson has been involved in the event since its beginning through his church. He now helps organize the event each year.

“I think we’ve really built a core of people who are very interested in making sure it survives as an event,” Robinson said. “The first few years it was kind of hit-and-miss. But we’ve built a real strong team, and that’s continued to grow, especially in the last 10 years. It’s been very stable and we’ve had a lot of good community support.”

Robinson said the San Clemente Relay for Life has grown exponentially with fundraising. He said more newcomers join the event each year.

Robinson said he was diagnosed with prostate cancer years ago.

“I went through three surgeries, chemotherapy and hormone therapy, and about six years ago I had completely (beaten) cancer,” Robinson said. “The year before I was diagnosed, my wife walked in Relay for Life. So it was kind of serendipitous. We’ve been involved in creating a support group at the San Clemente Presbyterian Church.”

Getting a second opinion and finding a good doctor are keys to helping someone beat cancer, Robinson said.

“The first thing is you have to get a good medical oncologist; regardless of what cancer you have you may need chemotherapy or surgery, but you need to find a good one,” he said. “You need to make sure they’re a medical oncologist. Once you’ve done that you really just need to educate yourself, be willing to ask a million questions. The doctors are so busy treating the disease, they don’t have time to sit there and explain everything to you, but they will if you ask.”

Robinson said if test results come back benign, people should still keep an eye on the situation and get tested again. Skin cancer is the most common form of cancer in the state of California, he said.

Lynn Wilton, who participated in this year’s San Clemente Relay, has had her own experiences with cancer as well as with family members suffering from the disease.

“My husband passed away with cancer, and in the years after that I developed colon cancer,” Wilton said.

Fortunately for Wilton, she didn’t need chemotherapy, but she said you have to get rest and maintain a positive attitude.

“Find the best doctor available, and just be positive, and a good result will come most of the time,” she said. “But I’m doing good. I’ve been in remission about 10 years and I’m having my 85th birthday this year, and I’ll see you next year.”

For more information, visit www.relayforlife.org or www.cancer.org for the American Cancer Society website.