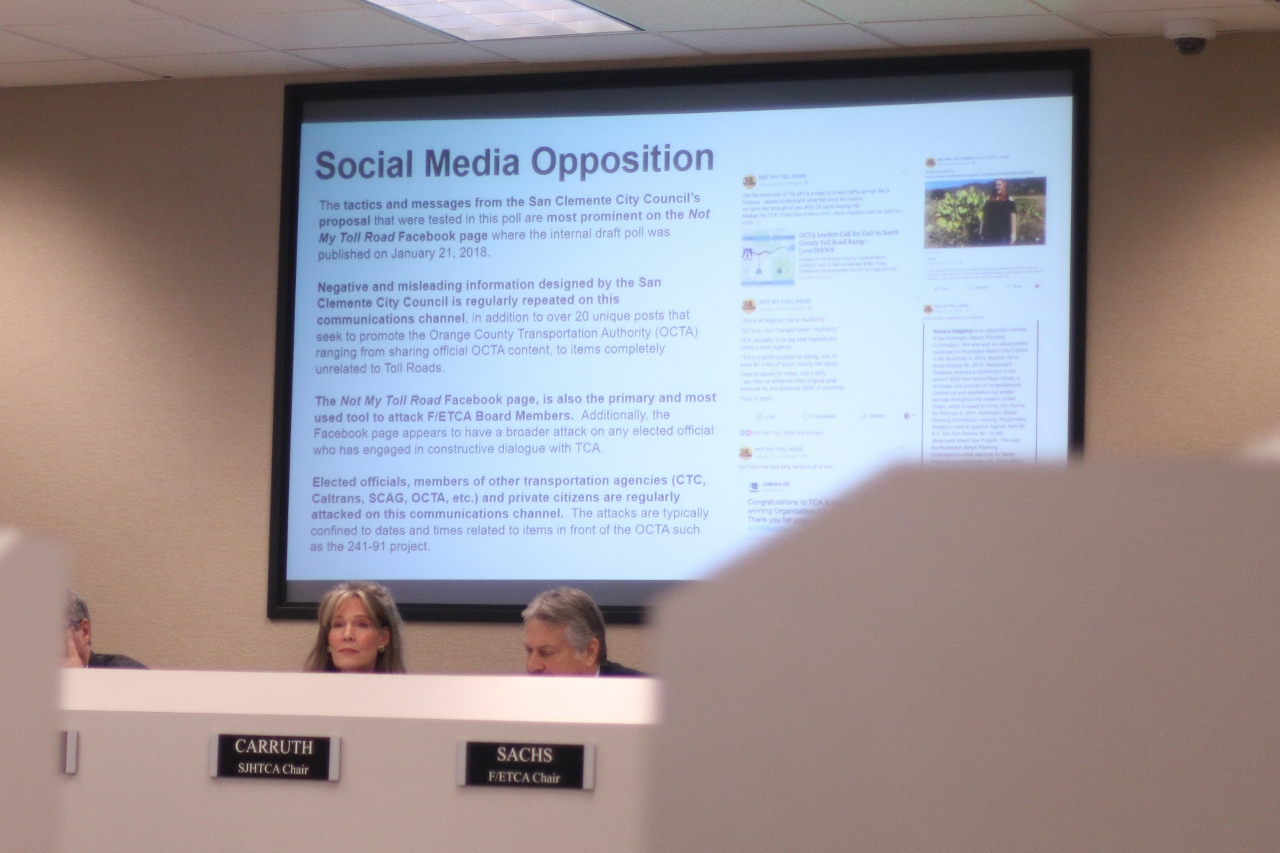 Officials with the administrators of The Toll Roads raised eyebrows at a campaign the city of San Clemente put together to oppose construction of toll roads through the city—something that the agency also does in favor of traffic alleviation in the area.

Prior to the announcement at the Feb. 8 meeting that a new toll road proposal would be added to what the Transportation Corridor Agencies (TCA) are studying in South Orange County, officials with the pseudo-governmental faction presented documents it obtained from a records request through the city of San Clemente.

Without making an official accusation, the TCA presented a series of emails, slides and other documents that showed San Clemente approved to spend $100,000 for consulting services from Englander Knabe & Allen as well as at least $29,700 for a voter survey to gauge opinion on traffic mobility, which was viewed by some TCA board members as political in nature and therefore using public funds was not permissible.

“The survey presents negative and misleading information, and I found it incumbent to make the board aware,” said Alex Avetoom, the vice president of Venture Strategic public relations firm, which works with the TCA.

TCA did a similar survey in 2017 that questioned people living in San Clemente as well as other areas of the county. TCA plans to spend $828,000 on marketing and advertising in its FY 2018 budget to promote its own interests.

The TCA may not collect sales and property tax, but it does receive funding through development impact fees, and Caltrans—the state’s road transportation authority—maintains the roads, which are paid for by the public.

Over the summer, the TCA had planned to spend $5,000 on advertising at the San Clemente Ocean Festival, but following an outcry on social media and at City Council meetings calling for a boycott of the annual festival due to the advertisements, the city decided to refund the money to the TCA.

Mike Chesney, the chief strategy analyst, said the part of the research TCA does in its study of the toll road ideas is to ensure “accurate” information is disseminated to the public.

Money through TCA marketing was used for a direct mail series campaign, social campaign, digital and print ads, and community outreach meetings, according to the presentation.

Fallout from the presentation

Following the presentation, Ed Sachs, a Mission Viejo City Council member and the chairman of the Foothill/Eastern Corridor Agency, directed the TCA staff to send the materials to the California Fair Political Practice Commission (FPPC), which enforces governmental proceedings. It wasn’t clear whether they would submit the materials as a complaint.

“I resent the accusations that I think you’re trying to make that San Clemente is working internally with the public, that the public doesn’t have their own views and can’t figure out the same facts that we have figured out,” Ward said.

Steve Swartz, a San Clemente City Council member and the city’s representative on the San Joaquin Hills Transportation Corridor Agency (SJHTCA), said the efforts San Clemente has put forth are similar to the TCA’s.

“It’s shocking that we should spend that kind of money (on consulting), yet what brought this to our attention and what brought this to a head was the money that the TCA has been spending with its consultants to put a spin on how San Clemente is creating a stop for the entire county as far as traffic flow, when all we are really trying to do is protect our kids, protect our canyons and protect the land that has been set aside already for development that is already there,” Swartz said. “I have no problem with a 241 connection down south, so long as it doesn’t tear through established and built communities, and this is what all these plans are doing that the agency has brought forth.
“My question is how can you say that the TCA and what it has been doing with its own consultants and spin-doctors is any different than what we have been doing in response to what the TCA has been doing to our city?” Swartz continued.

Avetoom said there was misinformation in the documents provided by the city.

“I believe that a full review of the exhibits would present incredibly important factors for this board and its mission to take into account,” Avetoom said. “The documents speak for themselves.”

Amid the fray, TCA officials also pointed to social media efforts from organizations such as “Not My Toll Road” that have targeted members of the TCA board and criticized the plans for a San Clemente toll road. Slides were presented from screenshots of the Facebook page.

When asked if the TCA was insinuating the city had paid these organizations, spokespeople from the TCA said they weren’t making that connection.

On the other side, members of the opposition have pointed to accounts of people they believe are in league with the TCA.

Terry Francke, the general counsel of the open government foundation Californians Aware, said he didn’t see anything that could be illegal, but he did say the way the contract was forged could be called into question. The money was not used in a political campaign or election, and therefore what the city did may not be illegal.

San Clemente City Council put the item on its meeting agenda in July, but there was no discussion on it, and it was added as a revised item before the meeting. On consent calendars, the public can call for the City Council to discuss the item, but no one did.

“If (the expenditure) is not related to an issue on the ballot, then it’s just spending public funds to sway public opinion; however improper that may be political, it doesn’t, as far as I can see, violate any laws,” Frank said.

San Juan Mayor Pro Tem Brian Maryott, who is the city’s representative on the F/ETCA, questioned the reasoning and motive of the board in bringing the items from San Clemente to the floor.

“TCA can take someone’s home with the stroke of a pen, and we’re going to fault them for hiring a public relations firm?” Maryott asked. “On a broader basis, what are we doing? This makes no sense to be in this battle mode now and sunk to this level. Our motivation is to get regional transportation advanced, and their motivation is to protect their homes. I don’t begrudge them fighting their battle.”

Mike Kraman, CEO of the TCA, said because the TCA determined the information to be misleading, they decided to present it at a public meeting.

“We find it disappointing San Clemente City Council engaged in a campaign of misinformation and putting out a poll that tests the misinformation to see which is the most effective. We are not here to say right or wrong, but to merely inform you that our challenge is getting the right information out there, to finding a balance to our traffic problems and why it is important that we have a robust communication to get that information out there.”

Weighing in on the friction, Save San Onofre Coalition, which has traded barbs with City Council regarding a settlement and protective agreement with the TCA, released a statement within hours following the TCA presentation.

One of the excerpts from the TCA’s presentation noted the $28 million that is set aside in a trust for mitigation efforts. The money is only to be expended on items that have approval from all entities involved in the settlement, which had been ongoing in the courts for more than a decade.

“Today’s disclosure that the San Clemente City Council unanimously approved a taxpayer-funded, negative PR campaign against the environmental organizations and thousands of residents who fought to save San Onofre State Beach is deeply disturbing,” said Stefanie Sekich-Quinn, coastal preservation manager of the Surfrider Foundation, in a statement. “Based on what we know to date, this misleading $100,000-plus PR campaign was designed to pit San Clemente neighbor against San Clemente neighbor. It represents a shocking waste of taxpayer money. San Clemente residents deserve better.”

FPPC officials at the media hotline said they were not authorized to speak on the record about the matter.

Article has been corrected to reflect that Save San Onofre Coalition sent the press release within hours, not minutes, since the end of the hearing.