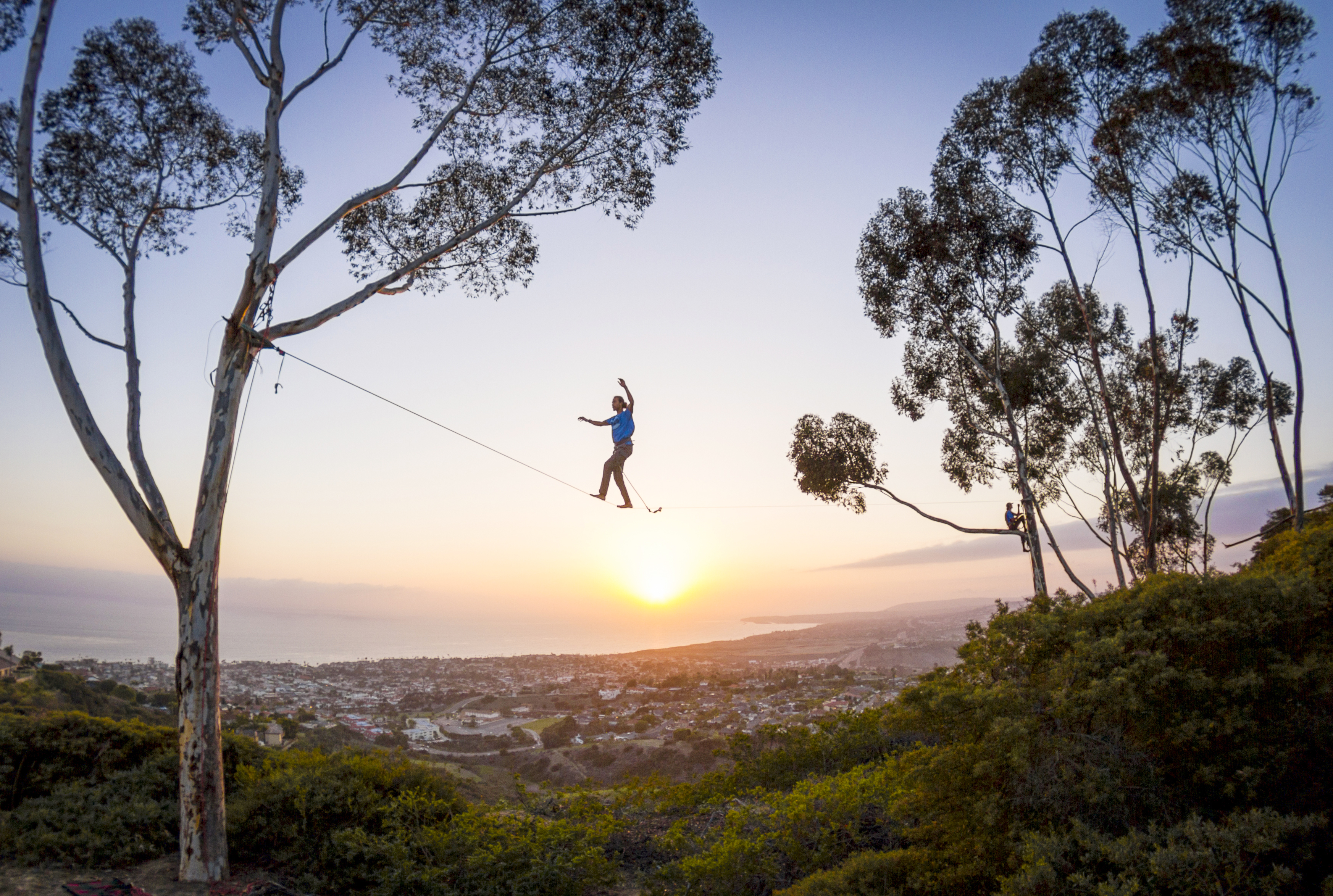 The Spanish Village by the Sea has been captured from many perspectives, but San Clemente native JR Racine is doing his best to find new ones.

With the express purpose of finding a unique way to address this year’s contest theme, Racine’s photograph depicts a friend slacklining near Top of the World in March. Racine said he took his improvement in positions each year as evidence of his growth as a photographer.

“I’ve been shooting slacklining for about a year and a half now,” Racine said. “I saw the theme for the contest this year was ‘San Clemente Swagger,’ so I thought that would be the perfect way to go about it. I looked for a beautiful place that showed San Clemente and could show the slacklining at the same time,” he said.

Event chairman Raad Ghantous, one of three founding board members of the organization, said the theme was chosen as a way to get unique entries into the contest this year, aside from shots of sunsets or the San Clemente Pier.

The organization has put on the contest each year since its 2009 founding. Ghantous, then Historical Society President Mike Cotter and John Alpay, now president of the Capistrano Unified School District Board of Trustees, formed the group to highlight positive aspects of the city following several contentious elections.

Racine, who is currently out of town shooting slackliners in Utah, said he’s become particularly interested in highlining, where, similar to the photograph, the walkers go to higher places, but are tethered in for safety. Racine was recently part of a short documentary called Life on the Line, focusing on slacklining in canyons and other high places. The film includes perspectives from two San Clemente residents. Racine recently relocated to Laguna Niguel after growing up in San Clemente.

One of the slackliners featured in the video, Flip Hickson of San Clemente, accepted the award on Racine’s behalf Friday. He said the activity is safe, so long as a leash and harness are used, but that in many instances, the activity is discouraged by police for the perceived safety issues, though it is not illegal in the state. He said he hopes providing a new perspective through work like Racine’s can effect a change in those attitudes.

“We just want to be able to do it in parks and not be hassled,” Racine said. “Doing it low is not dangerous and it’s not really harming anyone.”

Holding Out for the Right Shot

Second place winner Jolee Cobb, a junior at San Clemente High School, didn’t really plan her photograph out the way Racine did. Rather, a chance shot at Riviera Beach led to her second-place photograph.

“My brother and I were going up to Palm Springs before Christmas,” Cobb said. “I said, ‘Let’s just go take a picture.’ So we went down to Rivi.”

Cobb said she was especially lucky to get the photograph of her brother’s feet dangling from the Riviera tunnel at sunset, given the stress the steep tunnels there were taking on her brother’s balance.

“I told him ‘Just get up there,’” Cobb said. “He managed to perch himself up, but then started falling and I couldn’t get the picture. He said, ‘Hurry up.’”

Cobb said she hasn’t taken photography classes in high school yet, preferring it as a hobby. Her mother has entered the event in the past, however, this was Cobb’s first time in the contest.

Goran Matijasevic, a senior vice chancellor at UC Irvine took third place. He’d taken plenty of photographs at the beach on the day he and his wife visited, he said, but he found a pair of paddleboarders who became good subjects.

Matijasevic said, while he entered a series of shots of the two boarders, the one that placed was his favorite. He wasn’t sure how well his picture fit this year’s theme but felt the paddleboarders exuded something, having to paddle against the currents on the way out and then coming back in as surfers would.

Kindle Reeder’s photo received over 100 of the more than 800 votes cast for the people’s choice award.

Reeder, a professional photographer from Long Beach, previously lived and worked in San Clemente, which gave her familiarity with some of the iconic images of the city. When she became aware of the “San Clemente Swagger” theme, she struggled for a bit with plotting out a shot, until deciding she wanted to take a new look at a classic image of the city.

Her shot, which features the young son of a friend in a horse head mask in front of the Pier, turned out the way she wanted.

“It was exactly as I saw it in my mind,” she said.

Her young subject, Gavin, was equally enthusiastic, especially on hearing that she’d won the award.