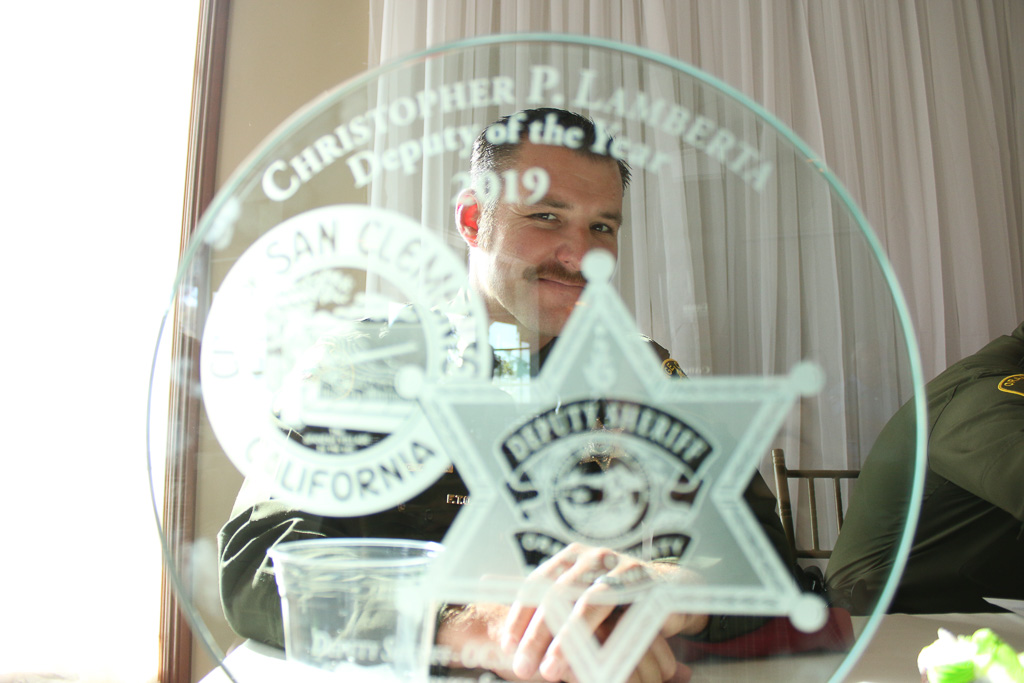 Firefighter, Deputy of the Year Honored by Exchange Club of San Clemente

There’s humble, and then there’s Deputy Christopher Lamberta, who was named the Deputy of the Year on Thursday, Nov. 15, by the Exchange Club of San Clemente Lamberta said this of his accolade: “.”

Not much of a talker, Lamberta’s peers described him as the shining example of an officer who keeps calm under pressure—a man who goes about his business and makes little fanfare of it.

But he looked green in the limelight.

Lt. Mike Peters, chief of San Clemente Police Services, said during the ceremony that those who know Lamberta know public speaking is not his forte.

When the fellow sheriff’s deputies and firefighters nominate someone for their respective awards, “We typically will ask the deputy to tell us a little bit about themselves, to give us some information,” Peters said. “The man doesn’t speak. So, I spoke with his wife instead. She gushed so much about him, I couldn’t take notes fast enough.”

firefighter Capt. Scott Lubben was honored as the Firefighter of the Year on Nov. 15 by the Exchange Club of San Clemente. Photo: Eric Heinz

Deputy Christopher Lamberta was honored as the Deputy of the Year, on Nov. 15 by the Exchange Club of San Clemente. Photo: Eric Heinz

Much of what his family said of Lamberta is that he’s been a dedicated family man—and workman, as he commutes from east Ortega Highway each day.

Fire Capt. Scott Lubben, the Firefighter of the Year, was described as a mentor and a leader by Chief Brian Fennessy of the Orange County Fire Authority.

“He came up in 2000, and with us he’s served every rank. He’s been excellent in all of them,” Fennessy said.
Lubben was an engineer firefighter at Station 59 in Talega, and Fennessy said his willingness and ability to train new engineers helped OCFA tremendously.

“(His) mechanical aptitude is such a huge value for what we do,” Fennessy said.

This was the 44th year the Exchange Club has hosted the event.

The Deputy and Firefighter of the Year awards will be presented next year in the 45th annual installment.