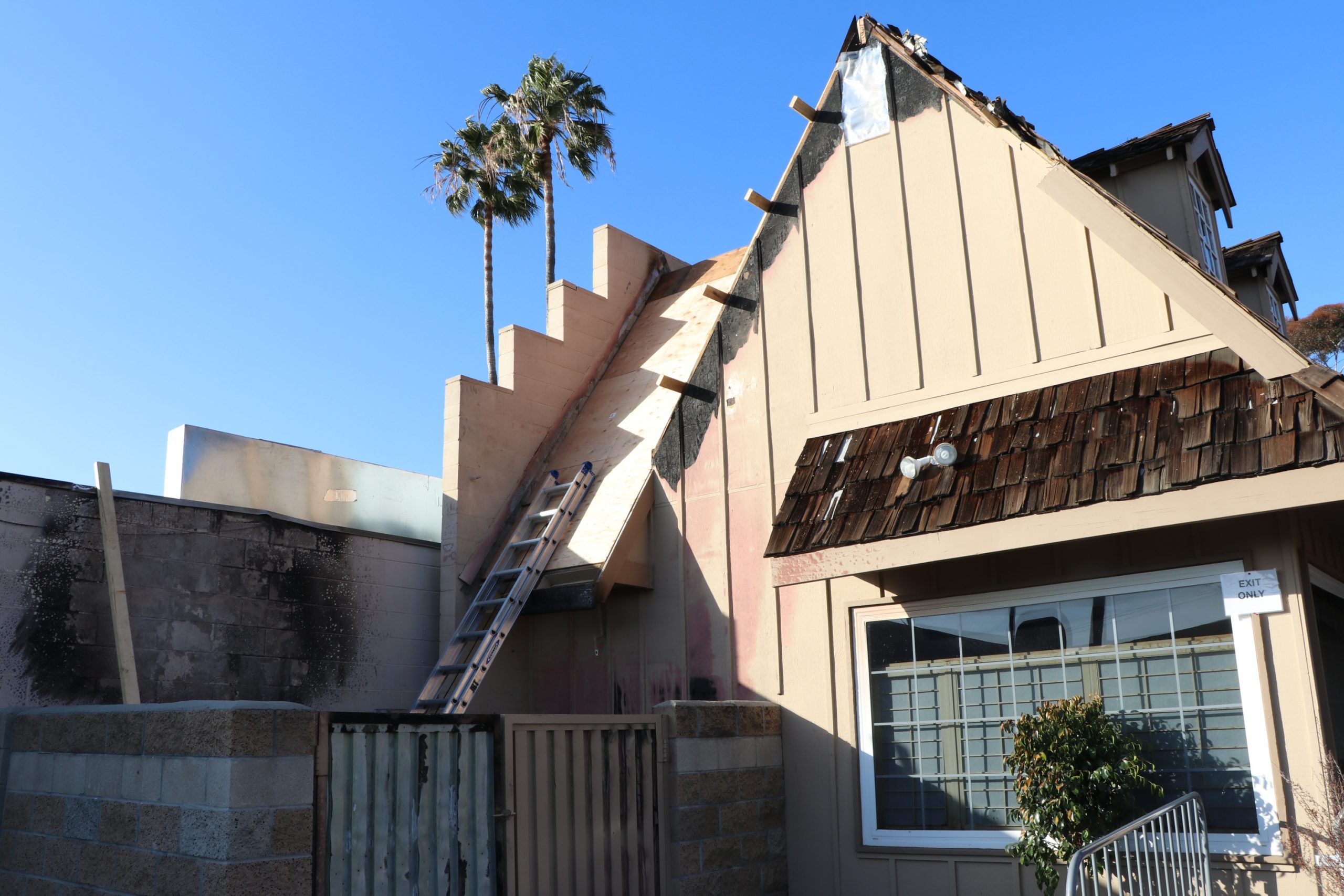 A dumpster fire outside of the Taka-O Japanese Restaurant that firefighters quickly extinguished late Saturday night, March 6, charred a portion of the structure, causing the owners of the local eatery to shut down operations while they made repairs expected to take a few days.

Just before 11 p.m. that night, fire crews with the Orange County Fire Authority received reports of large flames emanating from the dumpster that had spread to the wooden roof of the building, Fire Capt. Greg Barta explained on Monday, March 8.

Fire crews first arrived on the scene at 11:04 p.m. and were able to put the fire out within about four minutes, according to Barta, who also noted that there were no reports of injuries.

Roger Sugano, co-owner of Taka-O, told San Clemente Times on Monday that when he received a text from the eatery’s dishwasher late that night, he figured the employee was just letting him know he was about to leave.

“I heard my phone go off but I just picked it up and read ‘there’s a fire in the trash,’” Sugano recalled. Elaborating, the employee told Sugano that the dumpster outside the restaurant was ablaze, with its flames spreading to the front of the structure.

By the time he reached the restaurant, firefighters had already extinguished the fire, which burned the second-story portion of the building and the block wall that separates Taka-O and its neighbor Sonny’s Pizza and Pasta.

Gushing over the swift response of OCFA, as well as the deputy sheriff who first reported the fire, Kelly Sugano, co-owner of the restaurant and Roger’s wife, said they were fortunate the building didn’t sustain any more harm from the fire nor considerable water damage.

The part of the second-story roof that caught fire, she explained, is really just for show, as the entire restaurant operates on a single story.

According to Roger, firefighters had to rip the roof off to make sure there were no embers inside, which did create holes, prompting the restaurant to temporarily close Sunday and Monday as they made repairs.

“But they did a great job,” Roger emphasized of OCFA, later noting that the restaurant is expected to reopen Tuesday, March 9.

When asked if they knew how the fire started in the dumpster, Kelly and Roger said they were unsure, even noting that the area around the dumpster had been cleaned out earlier in the week. The dumpster itself, Kelly added, had been cleared out the day before during routine trash pickup.

“Literally the dumpster is gone … it melted into non-existence,” Kelly described, later adding, “it was emptied on Friday, so it really only had one night of stuff.”

As of Monday, Barta couldn’t provide a cause to what started the fire, stating that it’s under investigation.