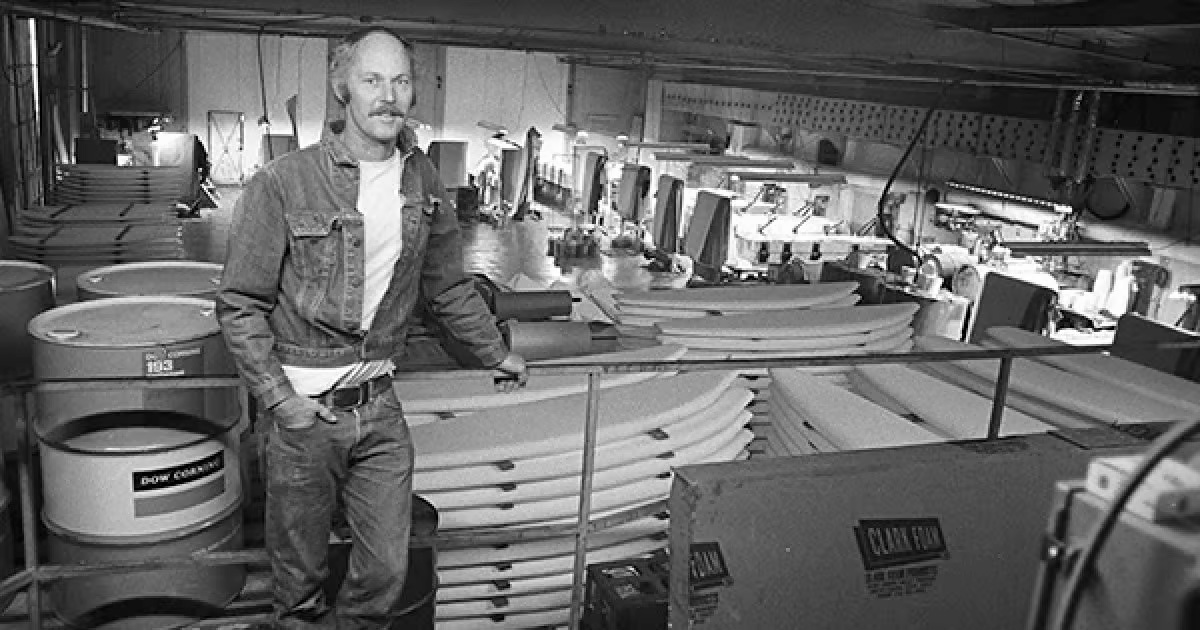 Have you ever wondered where your surfboard comes from? Not just who shaped it or where it was glassed, but the actual blank itself?

Today, there are numerous companies making both polystyrene and EPS surfboard blanks, but it wasn’t always this way. I recently found myself surfing at Poche and thinking of the late Wayne Penn Schafer, whose old beach house looks out over the break. It’s been a couple of years since we lost Wayne, but a conversation we had before his passing still dances around in my mind.

“One day, I was down hanging out at Trestles with a few guys,” Schafer explained. “Phil (Edwards) was down there. I was introduced to this rather tall guy; you couldn’t forget his name, Grubby.

“We got acquainted on the beach. He seemed like a pretty fun guy,” Schafer continued. “He was down at Hobie’s a lot glassing boards. He had this yellow truck with a camper on the back that he built. He’d sleep in it. He was like a homeless person. As I got to know him, one day he said, ‘Can I park down at your lot and sleep?’ ”

The Grubby that Wayne is referring to is Gordon “Grubby” Clark, who’s widely credited with inventing the first surfboard blanks.  He bought his house on Beach Road in 1955 for a paltry $5,500.

“Finally, I said, ‘If you want, I’ll rent you a room,’ ” Wayne recalled. “Grubby jumped at it, so he moved in here. Later on, in came Phil. He was living in Oceanside and doing a lot of surfing up here and hanging out, and he worked at Hobie’s. So now there were three of us here, and it was a great time period of us surfing and diving and fishing and just being surfers.”

But they were more than “just being surfers.” At one point, Grubby found himself laid up in a body cast after back surgery.

“Hobie (Alter) came by one day and said, ‘If you’re just going to be laying around, can you figure out this foam stuff?’” Wayne said. “So, Grubby gave him a list of all these chemistry books and sent Hobie off to go collect them.”

When it came time to put his calculations into action and start experimenting with foam formulas, Grubby found a small place in a canyon in Laguna Beach to serve as his top-secret skunkworks.

“He had a degree in chemistry, so he sort of knew a thing or two,” Edwards said. “Hobie and Grubby, they had contacts; a guy named Brent Goldsworthy was a hotshot guy in all that stuff. I never really knew him. But I think he helped them out a little bit. They all worked hard on it.

“Those early foam formulas, when it expands, it gets a high PSI, so they had a (expletive) of a time controlling it. And it’s toxic. The foam is urethane, the fiberglass is styrene-based, and it’s nasty. It’s a whole different animal.”

Under the cloak of secrecy, creating heavy molds out of concrete, after much trial, error and experimentation, eventually Grubby dialed in his foam formula and was able to consistently reproduce what would become some of the first mass-produced foam surfboard blanks.

The technological advancement was not lost on Hobie, who almost immediately leveraged it as he grew his surfboard business.

“Grubby was in the middle of nowhere when he built the Clark Foam factory, and then everything built up around it,” Edwards said of Grubby’s former factory in Laguna Niguel, which was suddenly shuttered in 2005.

“The fire department got on him, big time. So, he finally just left,” Edwards said.

When he walked away from Clark Foam, Grubby held what can only be described as a monopoly on the surfboard foam market. Through savvy and often scrupulous business practices, before he closed his doors, he was responsible for producing 90% of the surfboard blanks in the United States and 60% globally.

“Now, he’s the largest landowner in Oregon. He’s got 89 square miles,” Edwards said. “He raises sheep and says Orange County is one of his biggest markets.”

And to think, it all started when Wayne Penn Schafer opened a couple rooms to his friends so they could just keep living the surf life. Mission accomplished.