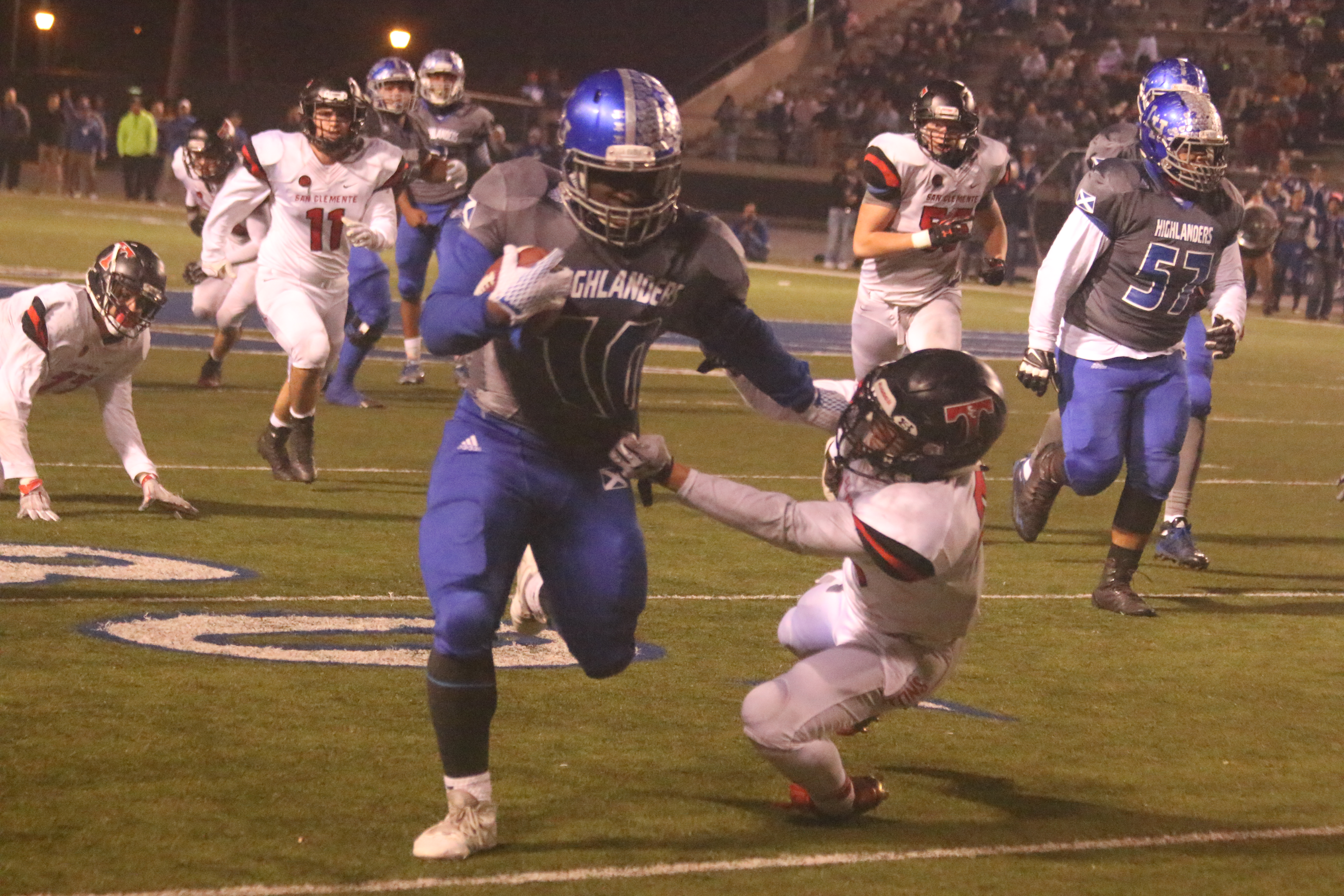 NORWALK — On paper, the CIF-SS Southwest Division Championship matchup between No. 1 La Habra and No. 2 San Clemente looked like a game that could come down to the final play.

On Dec. 4, in front of thousands of fans at Cerritos College, that’s exactly what happened.

With his team trailing the Tritons by three points and with only 5 seconds remaining on the clock, La Habra senior quarterback Eric Barriere heaved a last-second 27-yard Hail Mary pass into the back corner of the end zone. Through a pile of bodies, Highlanders wide receiver Prince Ross made a leaping catch and brought the ball down, securing a 39-36 victory and a seventh CIF-SS Championship for La Habra.

The Tritons took control of the game only seconds before Barriere’s game-winning throw.

Trailing 33-29 with just over three minutes left, San Clemente was led downfield by junior quarterback Jack Sears, who engineered an 84-yard scoring drive. Sears was injured on a run play at the La Habra 34-yard line during the drive but, after taking only one play off, came back and hooked up with junior Brandon Reaves for a two-yard touchdown pass that gave San Clemente the lead, 36-33, leaving only 20 seconds left on the clock.

The Highlanders returned the ball to midfield on the ensuing kickoff but got an extra boost from a 15-yard penalty called against the Tritons. Barriere completed a short pass on the next play, which set up the Hail Mary.

“It’s a tough loss. Unfortunately, it came down to the very last play like we thought it was going to be,” San Clemente head coach Jaime Ortiz said. “Eric Barriere, the kid made some great plays and he made another one there.”

Barriere was nearly perfect on the night. The senior completed 15 of 16 passes for 287 yards and four touchdowns. He also ran for 97 yards on 12 carries and scored a rushing touchdown.

La Habra took its biggest lead of the night to start the fourth quarter following a four-yard touchdown run by CJ Taylor to make it 33-21.

San Clemente responded with 15 unanswered points. Sears ripped off a twisting, turning 27-yard touchdown run at the nine-minute mark on the Tritons next drive to cut into La Habra’s lead, 33-29.

Sears ran wild in the second half, finishing with 141 rushing yards on a team-high 16 carries.

The Tritons scored twice inside the final minute of both halves. Sears hit senior Liam Eldridge on a two-yard pass with three seconds left in the first half to tie things up 14-14.

San Clemente took its first lead of the night early in the third quarter when Vlad Dzhabiyev scurried his way 44 yards for a touchdown and a 21-14 lead. But Barriere and his receivers would not be denied.

Barriere found Ross on a short pass to the outside, which the receiver turned into an 84-yard touchdown, seconds after Dzhabiyev’s scoring run. After the La Habra defense forced a quick three-and-out, Barriere broke for a 38-yard scoring run, leaping over a Triton defender at midfield, to take a 27-21 advantage.

San Clemente has now lost in the CIF-SS Southwest Division finals for a second consecutive season. Last year’s loss, which came against Trabuco Hills, was decided late in the fourth quarter.

“At the end of the day I’m proud of the way our kids battled back the entire season. Anytime you when more than 10 games it’s something to be proud of. They got San Clemente back on the map where it belongs,” Ortiz said. “Words can’t heal what happened tonight. But 10-15 years from now these kids can look back and say that they had a great career at San Clemente High School. I think they can hold their head high.”