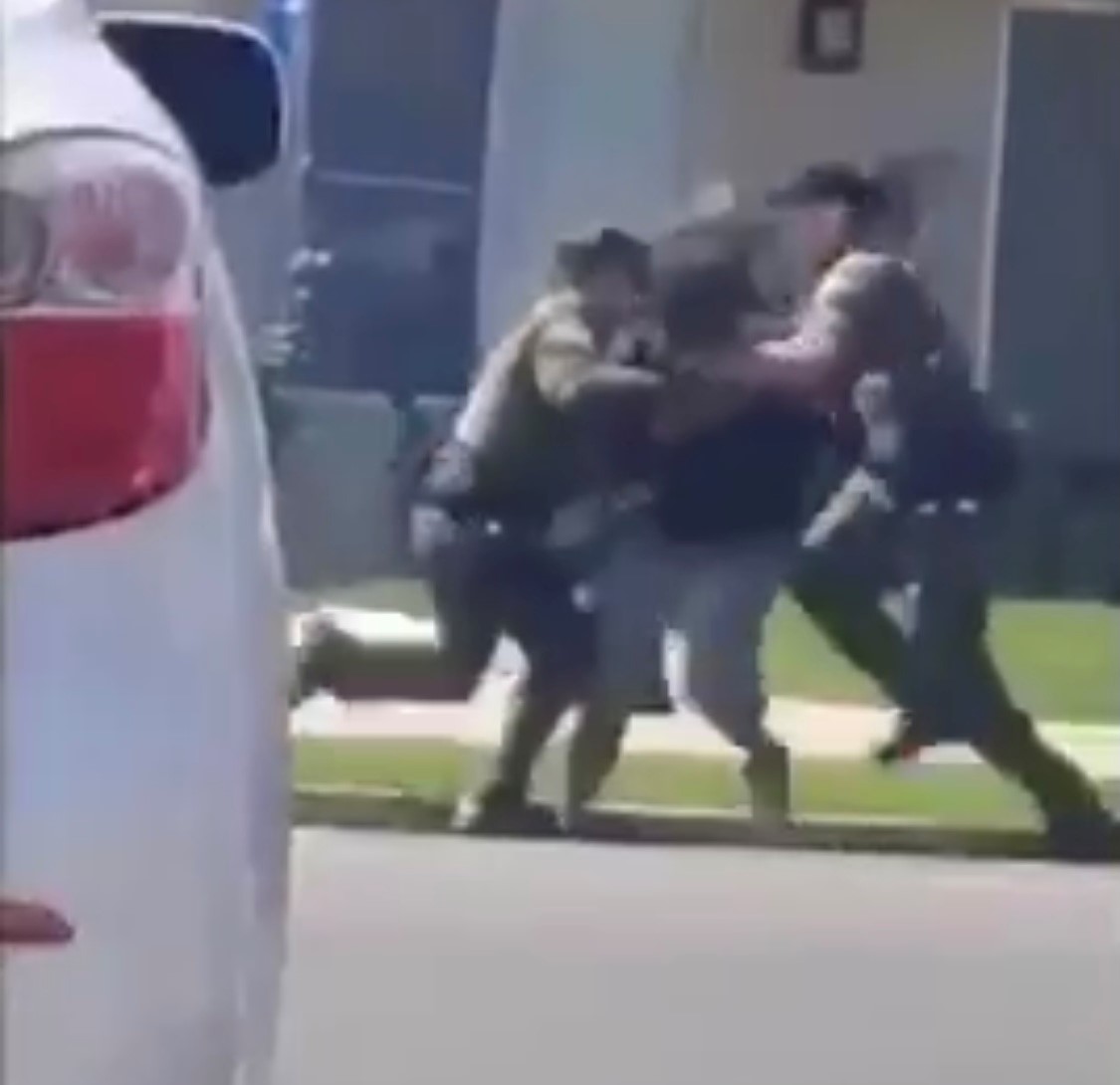 UPDATE (2:55 p.m.): Story has been updated with information on surveillance footage of the altercation.

Cell phone and surveillance footage has surfaced of the altercation between two homeless outreach deputies and Kurt Andras Reinhold, a 42-year-old homeless Black man, who was shot and killed during the scuffle outside a San Clemente hotel on Wednesday, Sept. 23, shedding additional light on what led to the shooting.

At the start of the nearly 90-second cell phone video, first published by Local Story TV, the deputies with the Orange County Sheriff’s Department’s homeless outreach unit appear to be notifying Reinhold that he had been jaywalking, while keeping him from walking away and instructing him to sit down.

OCSD could not confirm what the initial contact by officers was for, or, in referring to him as a suspect, what he was suspected of doing. OCSD spokesperson Carrie Braun said that would all be part of the forthcoming investigation by the Orange County District Attorney’s office.

In the video, Reinhold, whose last known address as Los Angeles County, according to OCSD, tells the officers to “stop touching me” and asking “what is your problem?” as he tries to continue walking. The video later cuts to show Reinhold attempting to walk away as one officer extends his arm, pushing him back.

After the video cuts again, right before the altercation, one deputy is seen extending his arm, keeping Reinhold from walking, while the other deputy comes from the side of Reinhold before grabbing him.

As the deputy begins to spin Reinhold, the other deputy grabs Reinhold from the other side and appears to tackle him, resulting in all three going to the ground. The two deputies are then seen pinning Reinhold on the ground.

The video cuts again, showing the struggle, all while motorists continue passing between the videographer and incident escalating on the other side of the street. Yelling ensues, and just as a truck and SUV pass by, a gunshot goes off.

The videographer, whom San Clemente Times has not yet identified, audibly states, “Oh, my God!” Another gunshot goes off while the videographer positions himself behind a vehicle. The video ends with deputies appearing to attempt to perform life-saving measures on Reinhold.

The surveillance video, first obtained by CBS2 (clip begins at 2:46 of the video), shows the opposite angle of the deputies’ struggle with Reinhold on the ground. The video appears to show Reinhold, while face down on the ground, reach for and grab the gun holstered on the deputies hip. The deputies then roll over with one deputy, whose gun holster was seemingly grabbed, lying on the ground wrestling with Reinhold and the other deputy coming over on top. It is unclear if or when the gunshots were fired in this portion of the video, as there is no sound.

The surveillance clip then cuts to the deputies attempting for perform the life-saving measures on Reinhold.

Based on surveillance footage from a nearby business, authorities on Wednesday said they believe Reinhold was attempting to reach for a deputy’s firearm during the struggle, which led to the shooting.

The incident occurred at approximately 1:12 p.m., when the two deputies initiated contact with Reinhold, according to OCSD.

Sgt. Dennis Breckner told news outlets on Wednesday that authorities didn’t know the details of what had occurred immediately before the altercation.

While it remains unclear whether Reinhold was being stopped for jaywalking, as indicated in the video, a press release from OCSD on Monday, Sept. 21, explained that deputies were scheduled to conduct bike and pedestrian safety enforcement operations in San Clemente on Wednesday.

“Deputies will be looking for violations made by bicyclists, drivers and pedestrians that put roadway users at risk,” the release stated, adding: “Deputies will also look for pedestrians who cross the street illegally or fail to yield to drivers who have the right of way.”

“Typically, our specialty units are not involved (in) additional enforcement activities like that,” Braun said.

At a 2 p.m. press briefing on Thursday, Sept. 24, Sheriff Dan Barnes provided updates on the incident including confirmation that Reinhold was homeless.

“Homeless liaisons are tasked with contacting individuals in the community who they know to be homeless or believe to be homeless. They offer them services if they are open to that,” Braun said. “We can’t speak to exactly why this contact was initiated and we can’t talk to the deputies’ frame of mind leading into contact because they have not provided statements to DA yet.”

Braun said that there are also witnesses to the shooting incident that need to be interviewed.

OCSD deputies are required to undergo crisis intervention training in order to be homeless liaison officers, which includes training for de-escalation and mental health identification. While the City of San Clemente contracts with City Net for homelessness outreach and coordination, Braun confirmed that the two deputies were not accompanied by anyone else.

During the press briefing, OCSD released an image still from security footage of what appears to show Reinhold reaching for a deputy’s weapon.

“I was saddened to hear of the deputy involved shooting in San Clemente that claimed the life of Mr. Kurt Andras Reinhold and extend my sincere condolences to his family,” said Orange County Supervisor Lisa Bartlett. “During these times in our country, it is critical that we respect the investigative process, follow the facts, and ultimately seek the truth.”

Bartlett represents the fifth district on the Orange County Board of Supervisors, which includes San Clemente.

“These devices can capture and record their interaction with the public and provide greater transparency and accountability,” Bartlett said. “One of my top priorities continues to be securing funding so that every Orange county Sheriff’s deputy is equipped with a body-worn camera.”

“We have the right to seek answers, and the responsibility to ensure a thorough investigation proceeds,” Bates said. “OC Sheriff Don Barnes has worked hard to build trust in our communities. I have spoken with him regarding the shooting and he is committed to a transparent process as the OC District Attorney’s office conducts its investigation.”

Zach Cavanagh and Lillian Boyd contributed to this story.