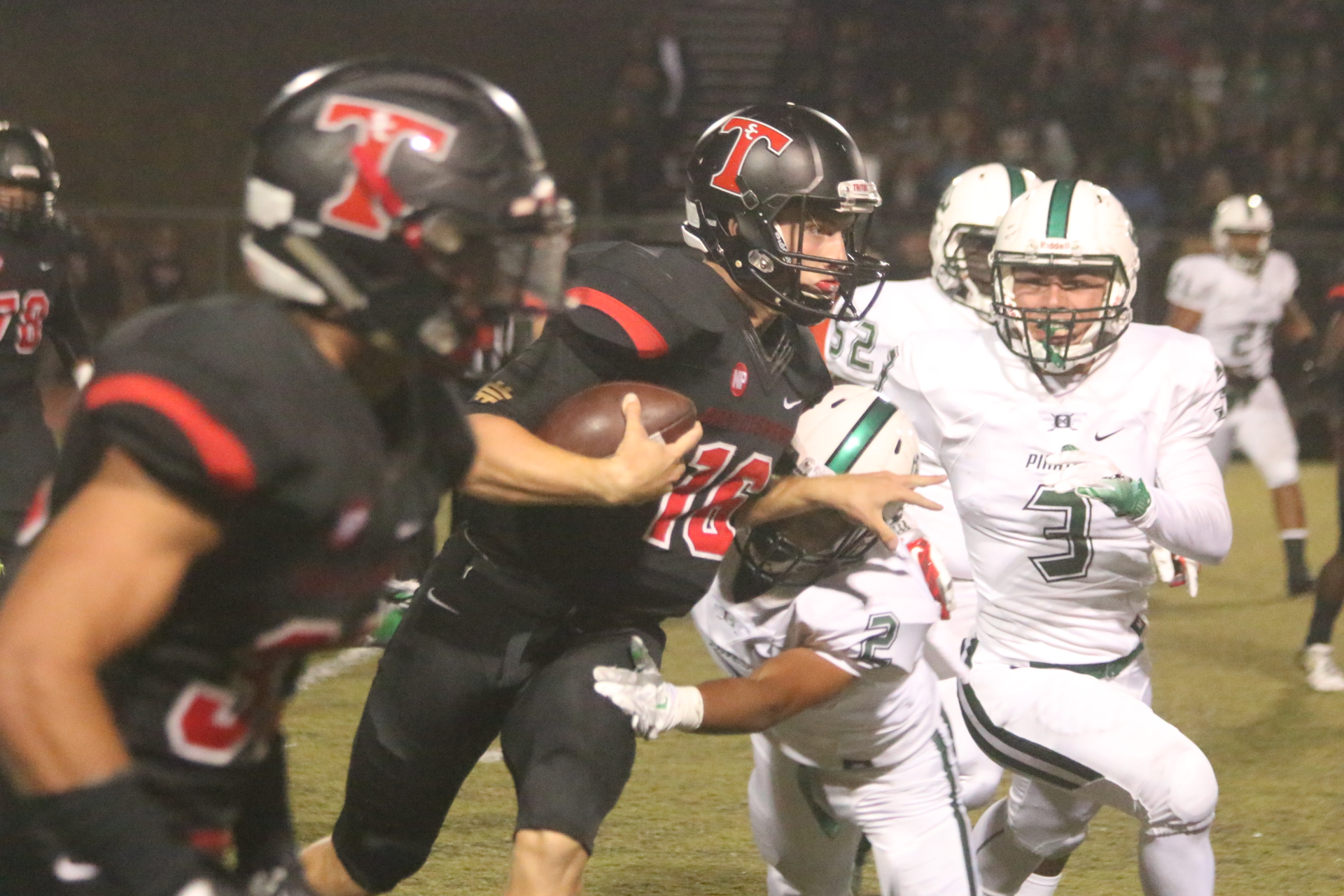 The Oceanside offense started out rather sluggish in its season-opening game against San Clemente on Aug. 26. But when the Pirates playmakers finally got on the same page, it led to one big play after another.

Oceanside quarterback Max Shuffer threw for 426 yards and four touchdowns to four different receivers to lead the visiting Pirates past the Tritons 51-42.

Shuffer, who completed just one of his first six pass attempts, caught fire in the second quarter and stayed hot throughout the rest of the closely contested game. The senior threw seven passes for over 25 yards, including two throws that went for over 60 yards. The first huge throw Shuffer made went to Jake Gerardi, a 6-foot-4-inch wide out, who caught the ball over two Triton defenders in the middle of the field and sprinted home for a 61-yard touchdown that cut into San Clemente’s lead 14-7.

The two teams exchanged touchdowns in the first half, and went into the final two quarters tied 21-21.

Every time the Tritons found the end zone in the second half, the Pirates had an answer.

San Clemente quarterback Jack Sears ran in his second touchdown of the night to open the third quarter, but the lead only lasted four minutes. On its next possession, Oceanside lined up to attempt a 33-yard field goal, but benefited from a costly San Clemente penalty that gave them a fresh set of downs. Shuffer quickly connected with Puka Kaleopa-Tuisee for a nine-yard touchdown pass to make it 28-28.

Oceanside took its first lead of the night in the fourth quarter following a 14-yard touchdown pass from Shuffer to Azizi Hearn that made it 35-28. Sears responded by threading a pass to Chris Kane for a 27-yard score on the Tritons next possession.

With the score tied 42-42, the Pirates ate up the clock and executed on a drama-filled final drive. With the ball at the Tritons 35-yard line, Shuffer heaved the ball into the end zone and was nearly intercepted. Seven plays later, Oceanside running back Tevin Meadows scored the winning touchdown with 10 seconds remaining.

Shuffer and the Pirates’ receivers tested the Tritons’ secondary all night. Although San Clemente was able to deflect several passes, they could not come up with a big play of their own.

“We had numerous opportunities to make plays and we didn’t and (Oceanside) did,” San Clemente coach Jaime Ortiz said. “Defensively, there were three or four times where the ball was right in their hands and we had the opportunity to turn the ball over and make a play and unfortunately we didn’t do that.”