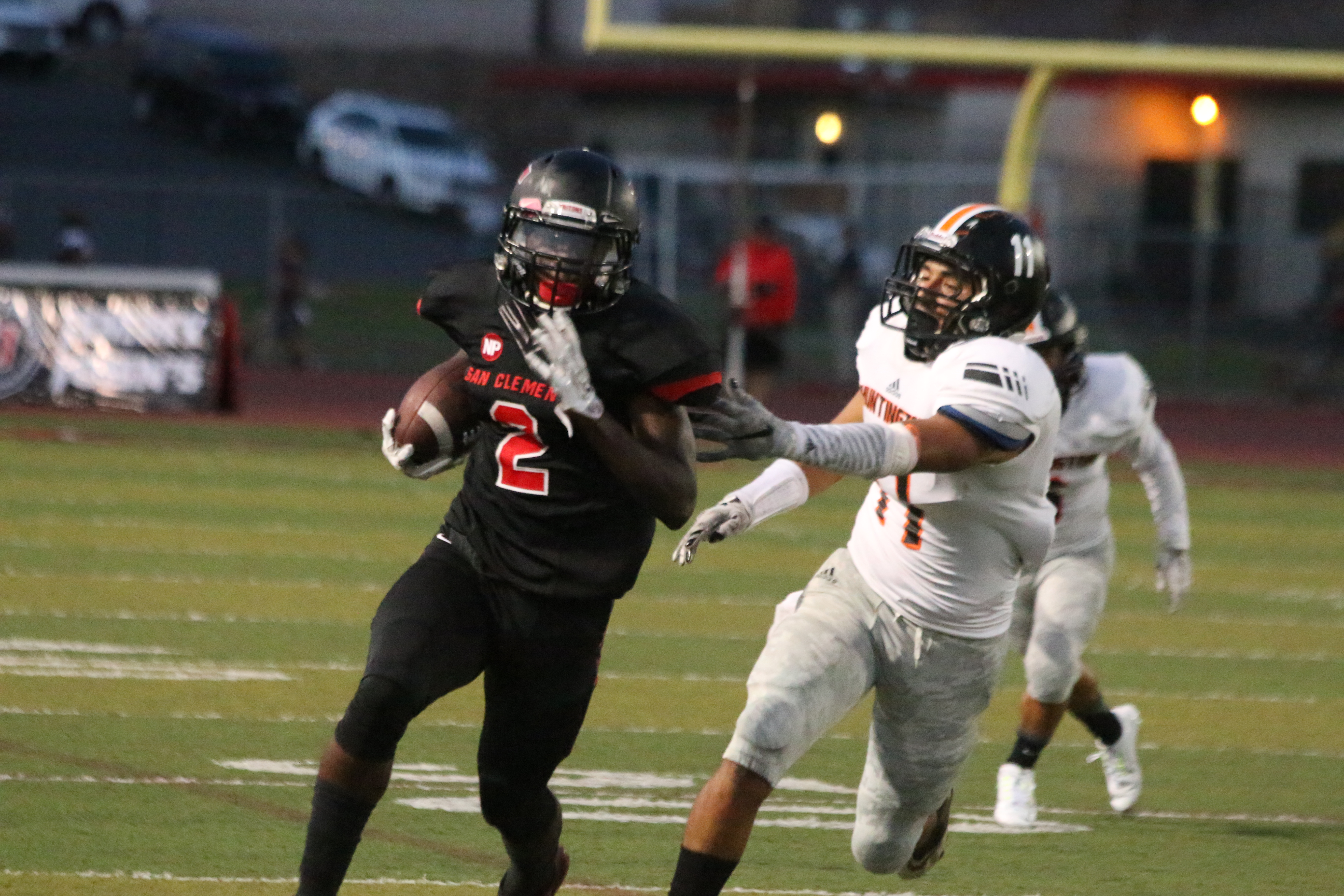 After last week’s season opening loss to San Juan Hills, the San Clemente High School football team entered the new week with the goal of cleaning up mistakes and playing a complete game.

San Clemente dominated Huntington Beach from the opening whistle, scoring on their first four possessions and holding the Oilers’ playmakers in check en route to a 51-21 victory.

The Tritons (1-1) junior quarterback Jack Sears looked shaky in his first varsity start against the Stallions one week ago but quickly showed why he was chosen to lead the San Clemente offense on Friday. Sears completed 19 of 21 passes for 257 yards and three touchdowns.

With Sears completing passes to multiple receivers in the opening half, the Tritons running game kept the offense humming.

Dzhabiyev and Reaves would takes turns playing hero over the ensuing six minutes.

At the start of the second quarter, Dzhabiyev found a large gap at the line of scrimmage and sprinted his way for a 75-yard touchdown run. Following an Oilers three-and-out punt, Reaves returned the kick 68 yards for a touchdown and the Tritons went up 34-0.

“Both Brandon and Vlad did a great job of running the ball,” head coach Jaime Ortiz said. “We’ve been preaching they’re ‘Thunder and Lightning’ and we had ourselves a little storm here tonight.”

Dzhabiyev had 96 yards rushing on nine carries to go with his touchdown catch and Reaves, who sat most of the second half, had six catches for 110 yards to go with his punt return.

San Clemente defensive end Liam Buhl recovered an Oilers fumble and returned it for a touchdown just before halftime to give the Trtions a commanding 41-7 lead.

Huntington Beach’s senior running back Hunter Simmons put on a one-man show, carrying the offense on the few positive drives the Oilers had. Simmons finished the night with 26 carries for 173 yards and a touchdown, which came with three minutes to go in the third quarter.

But the damage was done by the Tritons in the first 24 minutes, as they piled up 320 yards of total offense compared to the Oilers’ 230.

“Last week, unfortunately, we didn’t play a complete ball game. We came in Saturday morning, took a hard look at ourselves and made some adjustments and the kids did a great job responding and played a really clean game (tonight),” Ortiz said.