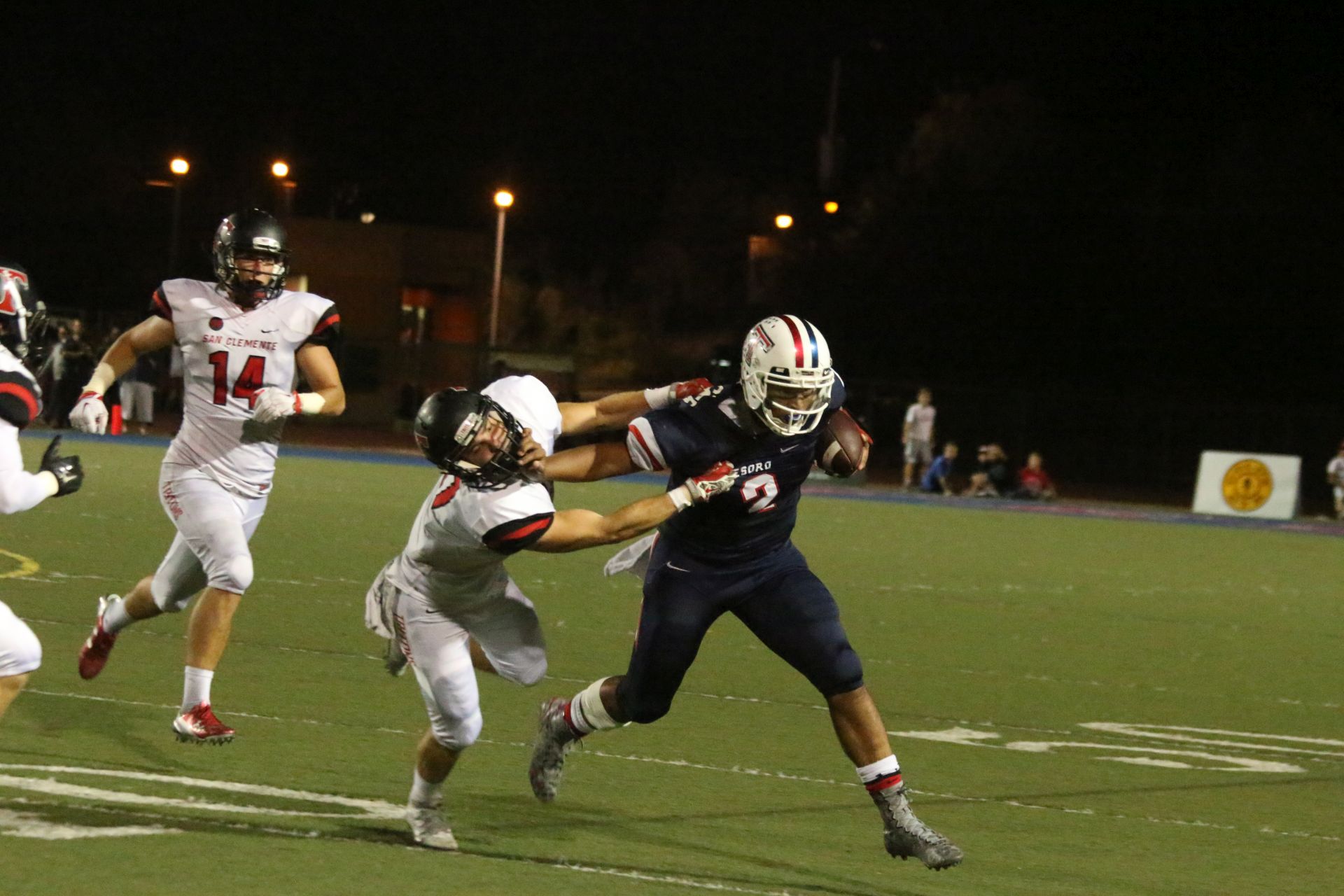 With standout quarterback Devon Modster sidelined with an injury midway through the third quarter against visiting San Clemente on Oct. 2, the Tesoro High School football team turned to backup quarterback Carter Jaenichen with the game hanging in the balance.

Tesoro held a five-point lead with just under five minutes to go in the third when Jaenichen unleashed his first pass of the game, a short one that receiver Spencer Heinsius turned into a 33-yard touchdown.

The play ended up being the decisive score of the night and Tesoro secured a 31-22 nonleague victory.

Jaenichen completed four of six passes for 73 yards and a touchdown.

San Clemente (4-2) stayed neck and neck with the Titans (5-1) the whole night, but several costly miscues and an aggressive Tesoro defense kept them from finding the end zone in the second half.

The Tesoro defense stood tall against a marching Tritons offense midway through the third. After the Tritons’ sophomore cornerback Branden Wilson picked off Modster to start the quarter, Tesoro forced a quick three and out. On the Titans first possession after taking over, senior running back Anthony Battista fumbled inside his team’s own eight-yard line, giving the Tritons prime field position.

San Clemente attempted to run the ball in, but the Tesoro defense was up to the task, stuffing the Tritons at the one-yard line on fourth down. From there, Tesoro marched the ball downfield 99 yards, capped off by the Jaenichen to Heinsius touchdown pass.

“The second half we kind of shot ourselves in the foot … (Tesoro) is a good football team. Give credit to Tesoro for playing well but we kind of didn’t put ourselves in great positions at times,” San Clemente head coach Jaime Ortiz said.

Modster and his receivers had a successful night against the Tritons defense. The Arizona-bound senior completed 29 of 36 passes for 324 yards and two touchdowns.

Modster’s most impressive pass of the night came after the Tritons first big miscue. With the ball at the Tesoro 34-yard line, a high snap went sailing toward midfield and the Titans recovered. Modster immediately went to receiver Shane Coleman and launched a perfectly thrown 49-yard touchdown pass into the end zone to put Tesoro up 16-13.

San Clemente responded on their next drive when junior quarterback Jack Sears completed a bubble screen to junior Brandon Reaves for a 25 yard score. A missed point-after attempt made it 19-17 to the visitors.

Modster found Coleman again less than two minutes later for a 17-yard touchdown pass and a 24-19 lead. Coleman finished the night with a game-high 10 catches for 155 yards and two touchdowns.

Reaves had a big night, catching nine passes for 63 yards and two scores. He also returned a kickoff 95 yards in the first quarter that set up a four-yard Vlad Dzhabiyev touchdown run to give San Clemente a 13-7 lead.

Calling Audibles: When Spring Football Should be Starting, Tritons Adjust to Distance Training