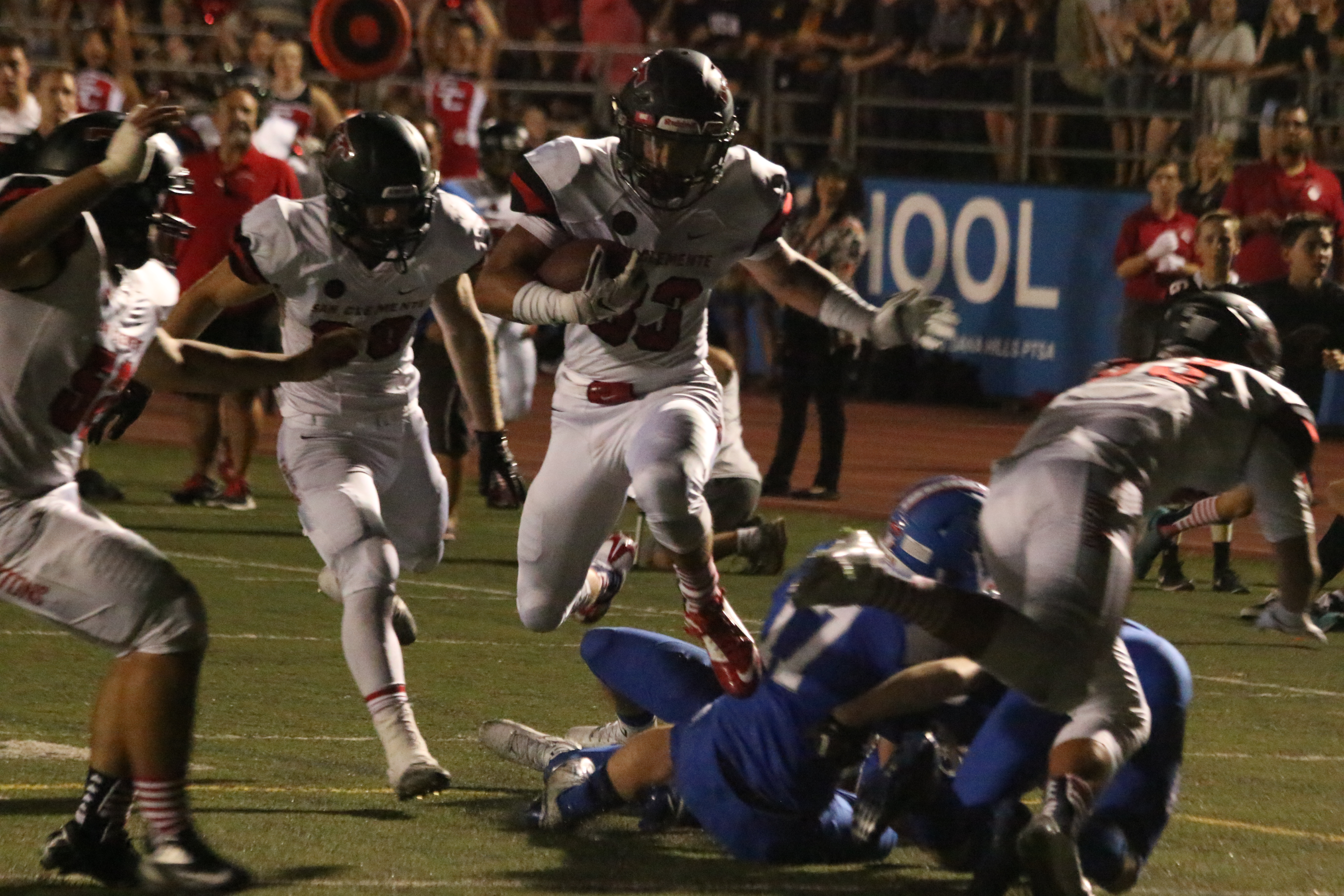 For the second consecutive week, the San Clemente High School football team got off to a hot start against a nonleague opponent and did not let up.

The Tritons turned in a dominating first-half performance on the road against Dana Hills on Sept. 11, scoring on their first seven possessions of the game and emerging with a 54-7 victory.

In just eight plays, a sequence that lasted just under six minutes, the Tritons built up a commanding 21-0 lead.

Junior quarterback Jack Sears hit Brandon Reaves on a short pass, which the junior turned into a 53-yard scoring play after slipping and sliding past the Dolphins secondary. Three minutes later, senior running back Vlad Dzhabiyev stiff armed his way past a Dolphins linebacker and scampered to the end zone for a 43-yard scoring run. The Dolphins (0-3) defense kept collapsing in the middle, which allowed Sears to air out a 33-yard pass to senior receiver Liam Eldridge two minutes later for a three-score lead.

Reaves would score two more times and sophomore Austin Whitsett punched home touchdown runs of 44 and 22 yards to give San Clemente a 48-0 lead at halftime.

The first half was similar to the Tritons game against Huntington Beach last week, when they racked up a 41-7 lead after 24 minutes.

“I think the kids just realized after their week 0 loss (to San Juan Hills), nothing is given to you and you have to earn it,” head coach Jaime Ortiz said. “The kids have had a lot better practices and I think it was a good wakeup call for us and the kids have come to play.”

Reaves scored three touchdowns on the night, two of which were runs of 30 yards or more.

The Tritons were especially dominant in the trenches, as both the offensive and defensive lines made their presence felt early. The Tritons defensive front had four tackles for a loss, including two sacks, in the first half. Junior Isaac Rex also made a leaping interception at the line of scrimmage, setting up a 22-yard Whitsett touchdown run two plays later.

Dana Hills did not record a first down until the 9:29 mark in the second quarter.

While Reaves and Dzhabiyev showed off their breakaway speed, the Tritons offensive line, anchored by seniors Tucker Scott and Donte Harrington and junior Turner Tonkovich, created huge gaps of space for the Tritons’ skill players all night.

“(The offensive line) is meshing really well together,” Ortiz said. “The kids are really coming together as a group and that’s what you want throughout the season.”

San Clemente will face a tough opponent next week in La Mirada, the No. 7 ranked team out of the Southeast Division.