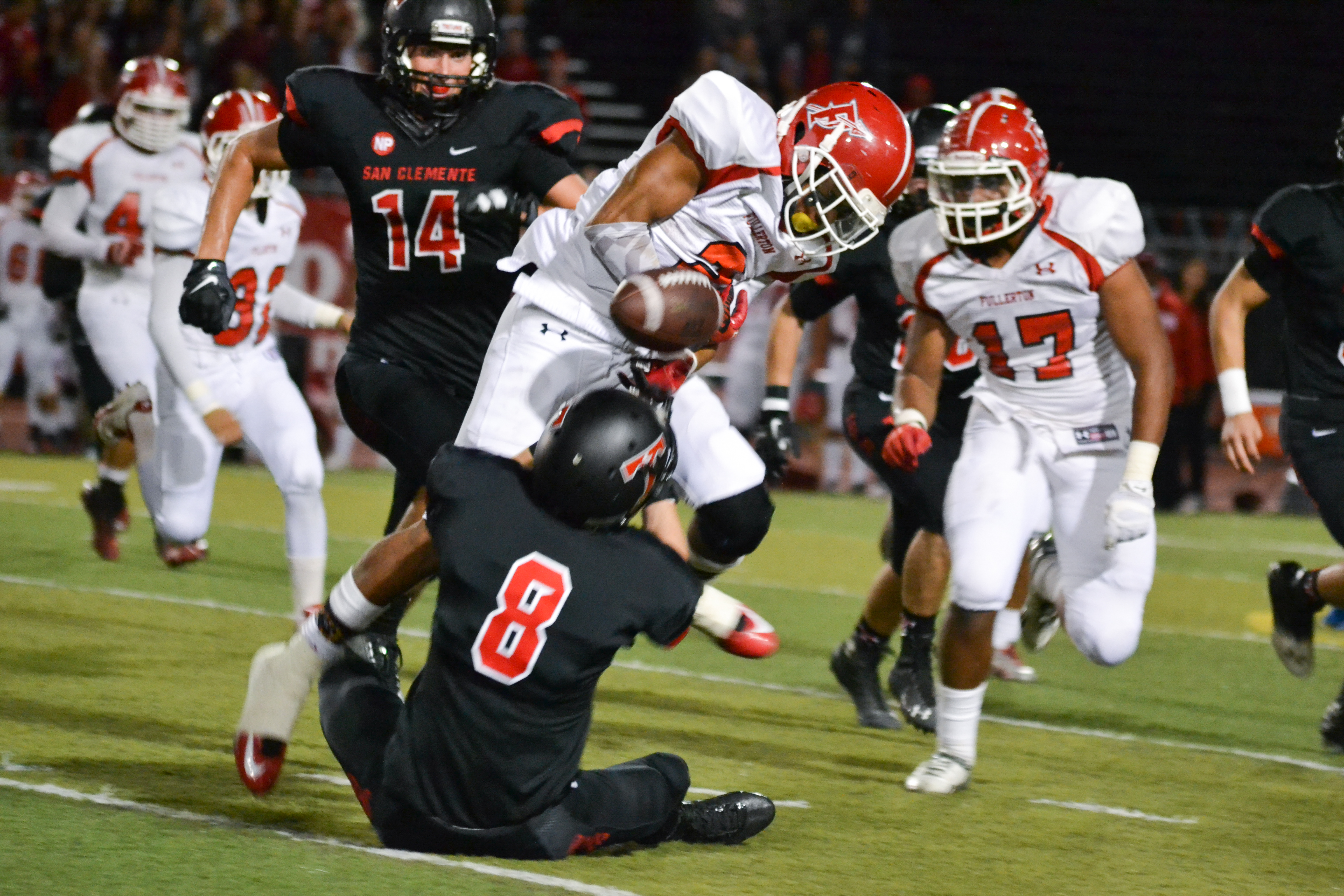 Football: Tritons Make Quick Work of Fullerton in First Round

The San Clemente High School football team wasted no time in making an impact in their first playoff appearance since 2012. The Tritons scored three times in the opening quarter against visiting Fullerton on Nov. 14, powering the CIF-SS Southwest Division No. 2 seed to a 42-14 first round playoff victory.

San Clemente (10-1) will travel to play Foothill in the second round on Nov. 21.

The Tritons offense had no trouble marching down the field on their first possession of the game. The opening drive lasted 14 plays and covered 78 yards, ending with a one-yard touchdown run by junior Vlad Dzhabiyev. San Clemente quarterback Sam Darnold punched in the two-point conversion to take an early 8-0 lead.

On the ensuing kickoff, the Tritons forced a Fullerton fumble and senior Max Lepley recovered it to set his team up at the Indians’ 29-yard line. A 21-yard pass from Darnold to sophomore Brandon Reaves set up a two-yard Dzhabiyev scoring run minutes later that made it 15-0.

San Clemente got the ball back three minutes later and added to their total in the blink of an eye when Reaves broke off a 70-yard scoring run just before the end of the first.

Darnold heaved a 70-yard touchdown pass to a full speed Jack Sears at the start of the second quarter to make it 29-0.

With a comfortable lead to work with, the San Clemente defense did not allow Fullerton to mount a comeback.

The Tritons defensive line sacked Fullerton quarterback Andrew Tavarez twice in the first half and continuously applied pressure. Fullerton got the ball down to the Tritons four-yard line just before the half, but defensive end Gerardo Gomez tackled running back Ryan Rains for a loss on third down and the Indians failed to convert on the next play.

Fullerton was limited to 78 total yards of offense in the first half.

“We’ve always had a goal to play with uncommon effort and that’s everyone swarming to the ball,” San Clemente senior linebacker Riley Whimpey said. “We did that well to start the game and we were able to give our offense a chance to get up on (Fullerton).”

The victory was the first playoff win for Tritons head coach Jaime Ortiz, who took over the program at the start of the 2012 season.

“I told the kids it’s been a long time (since a playoff victory) and it’s good to be here on a home field and get that win,” Ortiz said.