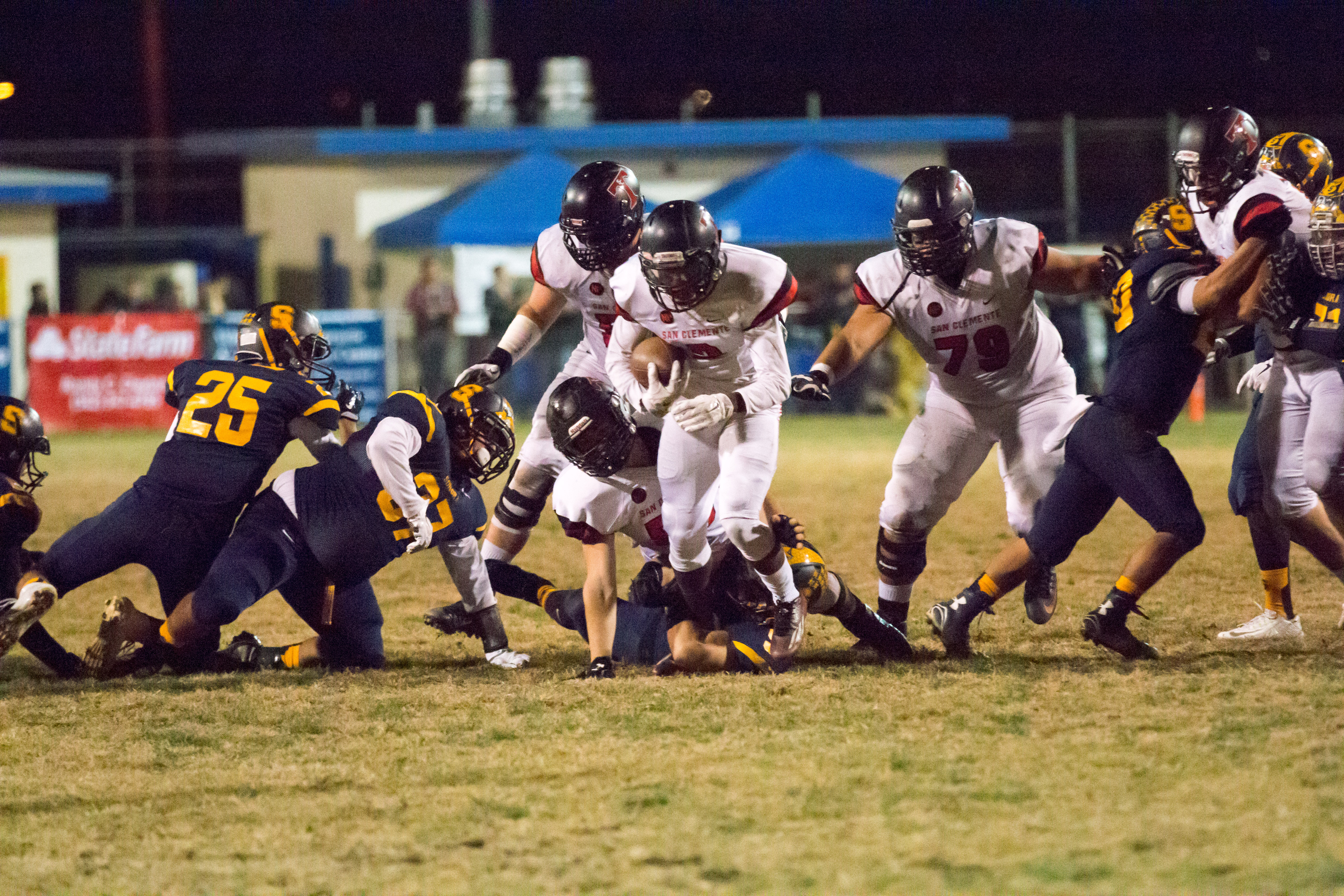 It was an all out sprint to the finish.

It was an offensive slugfest.

It was everything one wants in a high school football playoff game.

Yes, the CIF-SS Southwest Division quarterfinal matchup between Sonora and visiting San Clemente had it all on Nov. 20. In the end, San Clemente was able to hold on to a shrinking lead and Sonora failed to cash in on late chances as the Tritons secured a thrilling 52-45 victory and a berth in the semifinals.

San Clemente will host Buena Park, the Tritons third Freeway League opponent in a row, in the semifinals on Nov. 22.

The fourth quarter of the bout between the Tritons and Raiders is not one fans in attendance at La Habra High School will soon forget. The two teams combined to score 31 points in the final 12 minutes.

Sonora, trailing 45-28 midway through the final quarter, scored 14 points in the blink of an eye.

After running back Jacob Fimbres punched in a four-yard touchdown run, trimming the lead to seven, the Raiders lined up for what appeared to be an onside kick. The Tritons lined up accordingly. The Raiders kick, however, was sent sailing to midfield. The Tritons failed to touch the ball and the Raiders pounced on it, giving them possession at the Tritons 11-yard line.

Fimbres scored his fourth and final touchdown of the night three plays later and the Tritons lead was cut to 45-42.

In a game filled with long offensive drives, the final scoring push by the Tritons was a memorable one that ultimately sealed the victory.

San Clemente’s junior quarterback Jack Sears engineered an eight-play drive that ended with a leaping one-yard score over the goal line by running back Vlad Dzhabiyev and the Tritons pushed their lead to 52-42.

Sonora settled for a field goal on their ensuing drive and threatened again after recovering the following onside kick, but Tritons senior cornerback Kevin Kling intercepted Raiders quarterback Cole McDonald two plays later and ended any threat of an upset of the No. 2 seeded team in the division.

“It was a battle. We were going back and forth,” Sears said of the Tritons decisive fourth-quarter scoring drive. “We just wanted to band together. We trust in our line. We have so much faith in our offensive line and we have some of the best running backs in Orange County. We got behind them, we knew what we had to do and we went down and did it.”

Sears completed 20 of 23 passes for 326 yards and three touchdowns.

The Raiders had all the momentum early in the game, building on the large chunks of yardage gained by Fimbres. Fimbres, who rushed for 220 yards and four scores on 29 carries, scored his first touchdown of the night on a 56-yard dash up the sideline at the end of the first quarter to give Sonora a 14-7 lead.

San Clemente would go on to score 14 unanswered points off Sonora turnovers. The Tritons recovered a McDonald fumble and converted that into points following a 16-yard touchdown pass from Sears to Keith Jones.

Isaac Rex intercepted McDonald with just over two minutes to go before the half, taking the ball deep into Raiders territory. Sears would hit Brandon Reaves for an eight-yard score and San Clemente took its first lead of the night, 21-14.