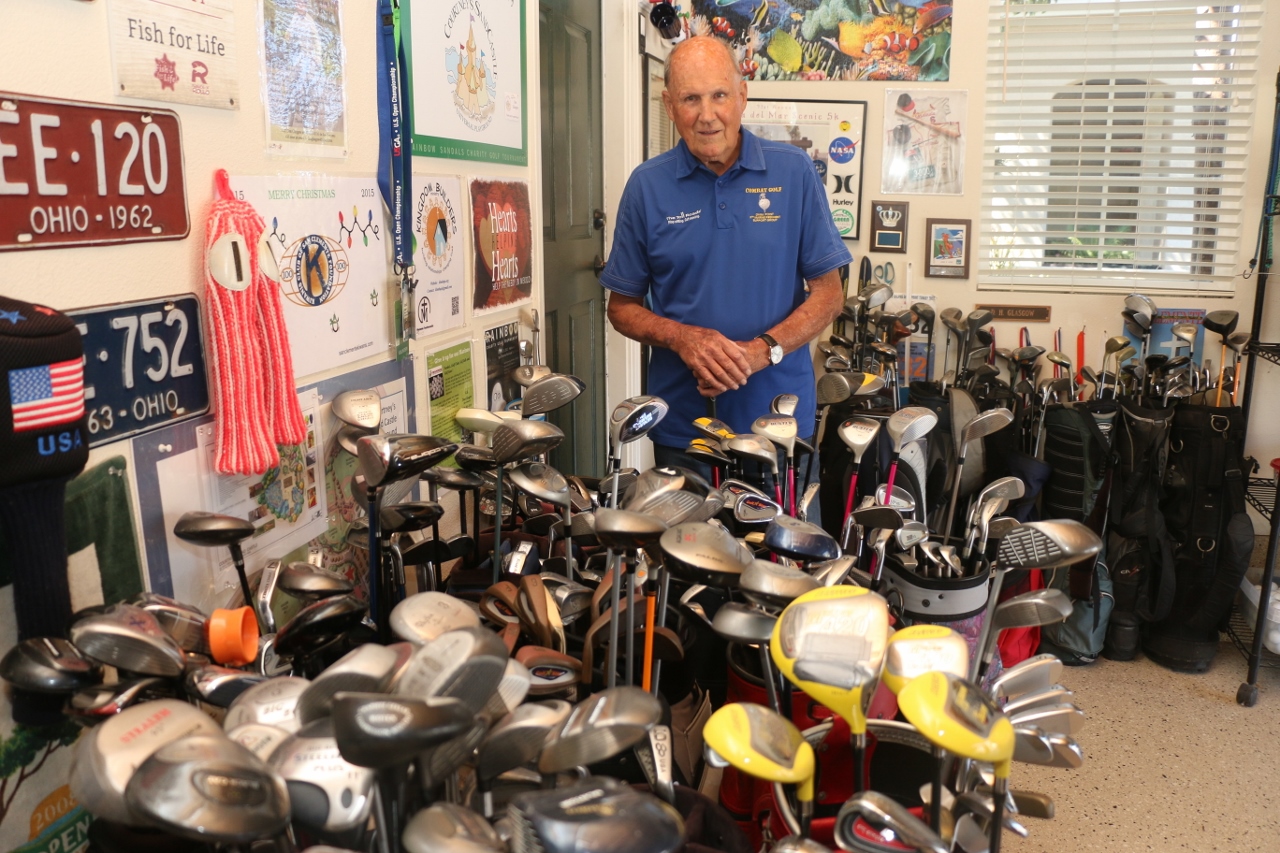 There is a hallway in Don Glasgow’s home that is filled with the memories of a life well lived.

There are pictures of his parents, his childhood home, grandkids and friends everywhere. Blending in seamlessly with the photos are plaques commending the 80-year-old for his devotion to volunteerism.

The San Clemente Chamber of Commerce has recognized Glasgow as its Citizen of the Year. He has a plaque from the California State Senate hailing him as a stalwart in the community. Hanging at eye level is a Presidential Achievement Award from President Barack Obama, celebrating his volunteer efforts.

As Glasgow walks down the hallway on a quiet Friday afternoon reminiscing over the past, he stops and points to his prized possession. Folded expertly inside a display box is an American flag that flew over a U.S. military base in the Helmand Province of Afghanistan. It was given to him by a group of Marines, and it’s the centerpiece of the house.

Glasgow raises his eyebrows as he gestures to the display, the pride swelling up on his face. He doesn’t say another word as he quickly salutes the flag and walks into his garage, ready to go to work.

Glasgow is known in San Clemente for being the consummate volunteer, especially when it concerns active duty and military veterans. Every year he puts the word out that he will be collecting new and used golf equipment to be donated to the men and women he respects so much, and every year the people of Orange County respond in kind.

Glasgow, who served in the Army in the 1950s before moving on to a successful career in business, has collected over 13,000 golf clubs and 50,000 golf balls for the military over the last eight years. From Camp Pendleton to Kuwait and Afghanistan, the clubs he collects have found the eager hands of military personnel looking for an escape while at home or abroad.

When he gets a phone call or an email, he drives as far as he needs to make the pickup. He hand-washes every piece of equipment and makes sure every set is complete with 13 clubs before its handed off to a service member.

“There are no short cuts,” Glasgow explains while examining the latest batch of donations in his garage. “Because these are for my boys.”

Every club and bag gets hand washed, no matter what state it’s in. He’s learned over the years that beneath all the dirt and rust are perfectly fine clubs waiting to be used.

Some bags and clubs fail to meet his expectations, however. An old bag that looks like it was used when names like Palmer and Hogan roamed the PGA Tour was discarded. So was a putter that looked like its previous owner had a bit of a temper.

“This one won’t cut it,” Glasgow said as he dragged the weathered bag to the side of the house.

Buckets of soap, washcloths and lots of steel wool are the instruments of cleanliness he wields like a surgeon. After a good scrubbing, each club face gets another meticulous once over with steel wool. His once-soapy hands quickly turn to brown as the rust and dirt that was caked on a club foam up and spill onto his driveway.

He cleans 40 clubs at once on a fold-up table in the garage and then it’s on to the next batch. This process will repeat itself countless times over the coming months.

This year’s collection effort is particularly important to Glasgow. After eight years he is calling it quits to focus on his charity efforts in Tijuana, Mexico. Glasgow, his wife, Beverly, and several others started Kingdom Builders Ministry which, among many things, helps build churches, schools and hospice care facilities for the poverty-stricken area.

Don Glasgow has been collecting golf clubs and donating them to Marines and members of the military for eight years. He is also an philanthropist in many other ways. Photo: Eric Heinz

Don Glasgow washes a golf bag that will be donated to Marines on Friday, April 21, in his front driveway in Talega. Photo: Eric Heinz

His love of golf is everywhere in Don Glasgow's home. Photo: Eric Heinz

Washing the clubs before they are donated is an important part of Don Glasgow's process in donating golf clubs. Photo: Eric Heinz

Don Glasgow tries to remember the details of a story about a project he worked on while being interviewed in his Talega home on Friday, April 21. Photo: Eric Heinz

Washing the clubs before they are donated is an important part of Don Glasgow's process in donating golf clubs. Photo: Eric Heinz

Colorful golf balls line the storage rack in Don Glasgow's home. He has donated tens of thousands of golf balls to Marines over the years. Photo: Eric Heinz

Old and new, Don Glasgow will take any functioning club and donate it to the Marines. Photo: Eric Heinz

Don Glasgow washes a golf bag that will be donated to Marines on Friday, April 21, in his front driveway in Talega. Photo: Eric Heinz

Old and new, Don Glasgow will take any functioning club and donate it to the Marines. Photo: Eric Heinz

Don Glasgow looks at the wall of memories he's built his life's work around. Glasgow told a few stories of his work on Friday, April 21. Photo: Eric Heinz

Don Glasgow will retire from collecting golf clubs this year, but he leaves a lifelong legacy of giving back to his fellow human. Photo: Eric Heinz

Glasgow is not a golf nut by any means. He plays occasionally and doesn’t keep score when he tees it up. But he recognizes the importance the game can have in life.

“The population of the military is no different than ours when it comes to likes and dislikes,” Glasgow said. “There are kids in (the military) who really want to learn to play golf. … They have time off so let’s support them if we can.”

Golf has some barriers to entrance, which is why Glasgow and local partners started a grassroots movement to make the sport accessible and enjoyable.

Several years ago Glasgow reached out to San Clemente Municipal Golf Course PGA teaching professional Rocky Rafkin. Rafkin offers free lessons to active duty personnel every summer from May to August, and Glasgow wanted to help out by making sure his equipment bin was fully stocked, ready to hook golfers up with a full set of free clubs, if needed.

The efforts at the Muni have morphed into a full-fledged three-month teaching academy for service members and their children. The club lets those participating in Rafkin’s classes play for free after 6 p.m. and provides them with carts.

Glasgow also hands over dozens of sets of clubs to the Dana Point 5th Marine Regiment Support Group for its annual Combat Golf  charity tournament, which sells out every year.

“The marines and sailors have heard about our tournament and know they’ll be able to take home a set of clubs. It so far exceeds their expectations,” Dana Point 5th Marine Regiment Support Group president Terry Rifkin said. “Don, to me, is like a patriotic godfather. You don’t get to meet someone like him very often.”

It’s out on the range at the San Clemente Municipal or on the course during the Combat Golf Tournament where the fruits of all the labor are realized. Seeing a Wounded Warrior rip a perfect drive down the fairway is all the payment Glasgow says he needs.

As he sits in front of the computer in his den, Glasgow scrolls through a huge photo gallery that has grown over the last eight years. There are dozens of photos of him smiling with Marines and of his car packed to the brim with clubs ready to be transported over to the Muni.

The images on his desktop conjure up a final, poignant story, which took place four years ago near the San Clemente Pier.

Glasgow spotted a man on the street that looked like a Marine, and after introducing himself and thanking the man for his service, the two got to talking. Glasgow asked the Marine what he did for fun in his downtime while serving overseas. The Marine, a helicopter pilot, said one of his favorite memories was when they received a shipment of golf clubs, astroturf and balls to set up their own makeshift driving range. The shipment, the Marines were told, came from a man in San Clemente.

“I told him ‘That was me.’ I started crying … I was speechless,” Glasgow said. “That’s how I get paid. At random in San Clemente by a Marine from Wisconsin who was in Afghanistan telling me a story like that. It’s all about the end result. To me that’s more important than anything that hangs on my wall. I don’t care what they (award) me, I’ll take that Marine. I love these guys. They’re incredible.”

For the final time, Glasgow is accepting donations of new or used golf equipment until the end of May. He can be reached at donglasgow45@aol.com or 949.481.0116.