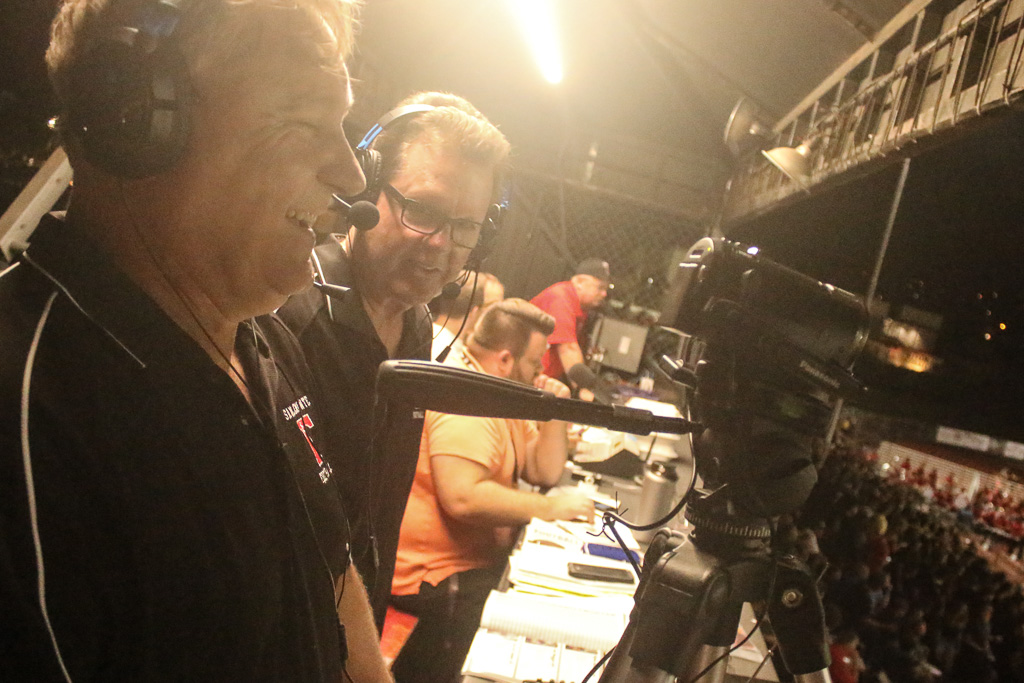 However, there’s been one constant around the football program sitting high atop the bleachers with voices echoing near and far: “Live with Triton Football, it’s Friday Night Live!”

Friday Night Live, the online broadcasts of Triton football with Richard Corder on play-by-play and Frank Kling on color, kicked off its 15th season in the booth covering San Clemente football in a 34-19 win over Oceanside.

The broadcasts began in 2004 with Corder on play-by-play, Ben Villa on color and Rodney Runolfson on the tech side. Corder, Villa and Runolfson were coaching the freshmen Tritons then.

“We were talking about it would be cool to broadcast the San Clemente games,” Corder said. “We talked about different things. Rodney was the brains of the outfit. He was the computer guy. He put it together.”

For the first three years, Corder and the crew were audio only. The broadcast, the first and still one of the only in the area for a high school football team, have developed over time to include streaming video and live chats with viewers from around the world.

“At first it was word of mouth, it was just kind of learning and putting it together,” Corder said. “Then when it finally evolved and we got into video. Chris Davies developed (the video). This thing just took off.”

Through those early years of setting up the first game at the old concrete stadium of Huntington Beach High School or calling the game with possums hanging above their heads with a view of Tijuana from Mater Dei of Chula Vista in 2005, the gig is all fun for the FNL crew.

As fun as the job is for Corder and Kling just to call the games at home and on the road nearly every Friday night, the true joy for Corder is the interaction with the people through the chat and elsewhere.

“People are so appreciative that we are able to broadcast to all the families and everybody that can’t make it,” Corder said. “Military families, relatives, all over the US. We’ve had military listeners in Japan, ex-Triton alumni. Just in the last year our listeners have doubled.”

One listener story has stuck with Corder.

In 2013, San Clemente cheerleader Saylor Voris was battling leukemia. As Corder was set to start a broadcast, a cheerleader came to Corder to tell him about Voris. Corder reached out to Voris’ mother and began giving updates of her progress on each broadcast.

“She was in the hospital and watching our game,” Corder said. “PA announcer taps me on the shoulder and shows me a picture of Saylor sitting on her bed watching Friday Night Live. It stopped me cold. I couldn’t broadcast for a few minutes. I couldn’t talk.”

“She battled her cancer,” Corder said, “and the last broadcast I had at Trabuco Hills (in 2013) I said we would see her next year when she got out of that hospital. Sure as heck, she battled it, and our first game next year, she came up.”

Voris lost her 19-month fight in April 2015, but the chronicling of her fight and her visit to the booth affected Corder.

“If I take that to my grave,” Corder said, “that’s the greatest thing to happen to us with the program.”

Corder and Kling have no ideas of ending their run any time soon. The two still have as much fun as anyone in the booth and are more than capable of continuing.

Corder still enjoys providing the game for free for listeners and viewers wherever they are.