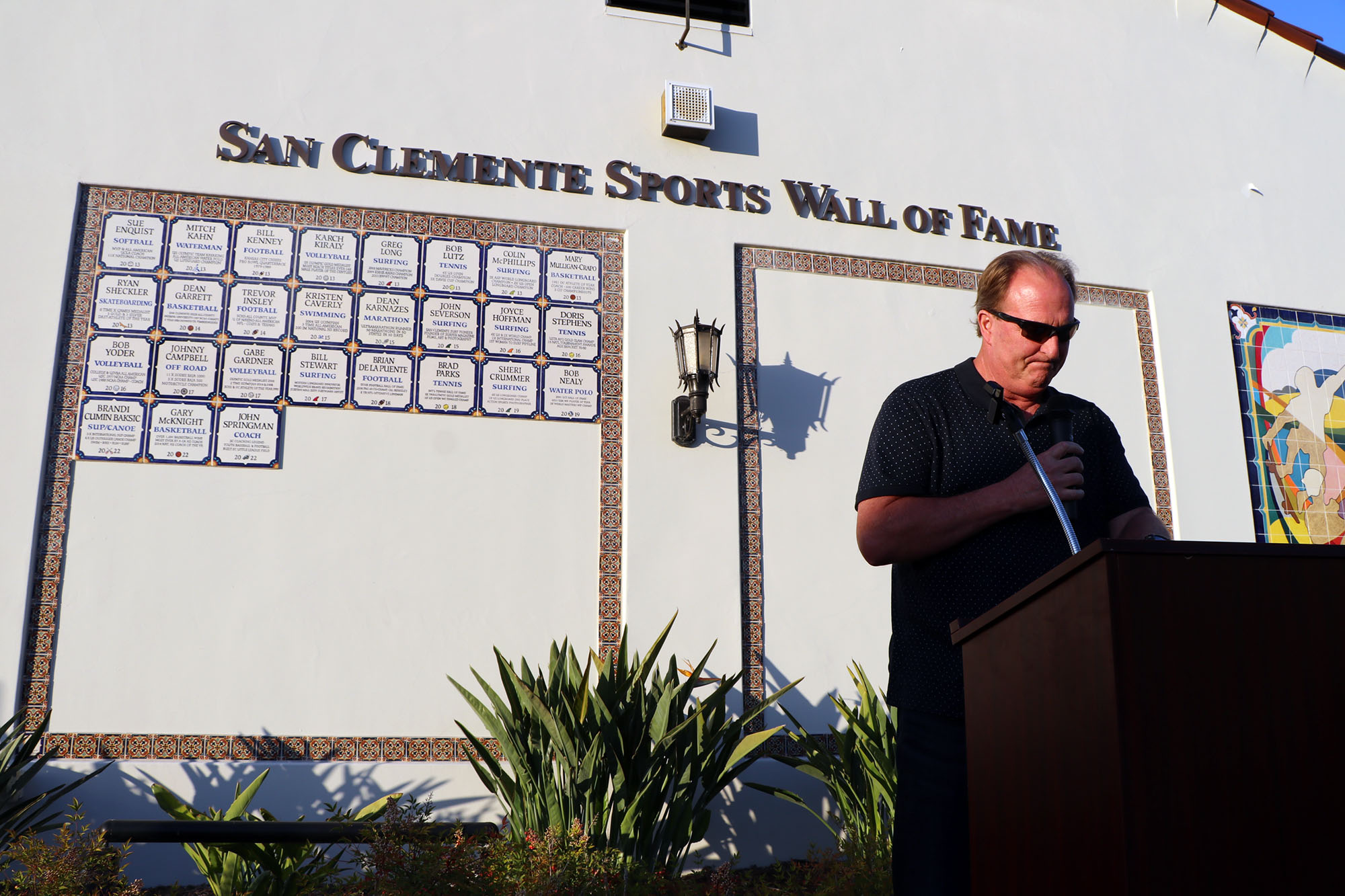 Enshrined on San Clemente’s Sports Wall of Fame are the names of 24 local professional or exceptional athletes, coaches, Olympians and other figures who contributed to the world of sports.

Those names represent individuals who have not only used their exceptional skills to earn titles and break records but have, through leadership or supporting local programs, worked to inspire younger generations of athletes to achieve their own goals.

This past Saturday, May 14, three more individuals of such caliber—Mater Dei boys basketball coach Gary McKnight, competitive swimmer and runner Brandi Cumin Baksic, and the late youth sports pioneer John Springman—earned their place on the Wall, becoming the 25th, 26th and 27th inductees.

Hosted by the Friends of San Clemente Foundation, the eighth annual induction ceremony gathered the athletes’ friends and family along with some local dignitaries to Vista Hermosa Sports Park, where the three inductees were honored to a glowing reception.

The Foundation and the San Clemente Sports Wall of Fame Committee select inductees each year who must have either been born, went to school or achieved their distinctions while living in San Clemente.

The ceremony is “a place and time when we honor past and current athletes, as well as local mentors and supporters, who helped our youth achieve their full athletic potential by coaching and or committing themselves to supporting the sports programs provided here in San Clemente,” Selection Committee Chair John Dorey explained.

For this year’s 25th inductee, the Foundation selected McKnight, the state’s winningest high school basketball coach, who grew up in San Clemente. He attended San Clemente High, where he played baseball and football as a Triton before graduating in 1971.

His love of baseball would lead him to volunteer at the local Boys & Girls Club as a coach. He later was asked by parents to coach a youth travel team for basketball—despite not knowing much about the sport, according to Triton girls basketball coach and fellow Sports Wall inductee Mary Mulligan-Crapo, who introduced the honoree.

Mulligan-Crapo noted that her husband was one of the first members on that travel team. Asking him to describe his experience of playing for McKnight, he told Mulligan-Crapo that he remembered two things—the first, having to sell scented candles door-to-door to raise money for uniforms and travel fees.

The other thing he recalled was that “as they were learning basketball, coach McKnight was learning basketball at the same time,” Mulligan-Crapo said. “Little did the parents (of the players) who were on that team know that they were launching a 40-year career of the winningest high school coach in the state of California.”

From there, though, he got “the coaching bug,” Mulligan-Crapo said, as he would go on to coach for a handful of schools before eventually getting the head coaching job at Mater Dei in Santa Ana in 1982.

“He has 1,188 wins. Yeah, that’s amazing,” Mulligan-Crapo said. “He’s the No. 1 winningest coach in the state with that number. He also has 122 losses. And I know if he’s anything like me, he probably only remembers the 122 games that he lost.”

McKnight expressed gratitude to his family, friends and colleagues who have supported him throughout his sporting career before joking that “this is my 41st year coming up coaching basketball at Mater Dei, and I just signed my 41st one-year contract. There’s a lot of stability in private school.”

“I was very fortunate; I fell into a really good situation,” McKnight later added, noting that he’s been able to stay in touch with many of his former players. “So, sometimes, I feel like maybe somewhere along the way we did something right.”

In closing, he touched on his long-standing desire to have coached baseball, particularly for his alma mater.

“The last thing I’ll leave with is, I will always be a Triton,” he said.

On Saturday, the FOSC Foundation posthumously honored Springman, who coached San Clemente youth athletics including Pop Warner football and Little League and Babe Ruth League baseball throughout the ’60s and ’70s. For a time, he even coached McKnight in baseball.

Sue Enquist, a nine-time collegiate national champion softball coach for UCLA and a Sports Wall of Fame inductee, had the honor of welcoming Springman onto the wall and introducing his son, Bill Springman, to give the acceptance speech.

During her remarks, Enquist called the elder Springman an “innovator,” a “forward thinker,” and a “pioneer” when it came to allowing girls and women in sports.

She recalled her brother being able to play on one of Springman’s baseball teams. As the little sister, though, all she could do was sit in the bleachers and watch the boys practice. Until one day, that is, when Springman came over to Enquist, instructing her to come on the other side of the fence and shag (or chase down) balls during practices and before games.

“I was on the other side!” Enquist said. “I was on the field with the players, shagging every practice. And John Springman told the boys, he said, ‘Susan’s gonna get her rounds (of batting practice), because she’s been shagging.’ I thought I died and went to heaven. And so, I got a head start as a female athlete back in the ’60s and ’70s.”

Though Springman is also credited with building the Vista Bahia Little League Stadium and the high school’s baseball dugouts, Enquist said his greatest impact was building character in others.

“John Springmann believed in really empowering others,” she said, later recalling that he once told her: “ ‘Susie, you have something special. Stay close to the game.’ And I did just that … John Springman was ahead of his time. He was a pioneer. He saw me, he saw others.”

Rounding out this year’s honorees was Cumin Baksic, who has competed in athletic competitions for most of her life, starting with the San Clemente Aquatic Team at 8 years old. She also played club volleyball at 13, and eventually competed on the Triton swim team for San Clemente High.

Cumin Baksic attended Florida State University on a full-ride scholarship and moved back to Southern California, where she’s been working as a firefighter in Torrance for the past 25 years. Though it’s her job to put out fires, nothing has been able to extinguish her fire for competition.

“Self-diagnosed as a highly addicted competitive athlete, Brandi started looking for an outlet for her pent-up energy,” Dorey said. “When she turned 30, she started combining running, biking and swimming to compete and sprint Olympic competitive triathlons.”

In 2007, Cumin Baksic placed sixth in the world by competing for Team USA in the Olympic distance triathlon, Dorey continued. She then competed in the 2008 Ironman Triathlon World Championship in Hawaii.

While getting advice from her husband on what to say for Saturday’s ceremony, Cumin Baksic explained, he told her to just keep it simple, short and “try to say humble.”

“I got the simple part,” she said, eliciting laughs from the audience.

She later went on to thank her husband, expressing how lucky she was for his selflessness and always supporting her when she bounced from sport to sport.

Prior to the ceremony, Cumin Baksic spoke about how honored she was to be included on the Wall with other notable athletes from San Clemente.

“When I look at the tile and everything that it says, it basically says that I’ve lived a pretty rad life,” she said. “I want to be that girl that did all of those things, and I am that girl, so that’s pretty cool.”

She also credited her upbringing in San Clemente as part of her successes and accomplishments.

“I’m born and raised, been in San Clemente my whole life,” she said. “So, really, all of it’s come from sports that I’ve done here. I’ve gotten my base and my foundation and done all my training here. San Clemente is the best playground with the ocean.”

When she’s not firefighting, Cumin Baksic said she can be found paddling with the Dana Outrigger Canoe Club, which is, she noted, a very competitive team that travels around the world.

“I’m still paddling competitively with them,” she said. “So, I don’t know when I’ll stop. I never thought I’d still be competing at something; it’s been 40 years of competition.”