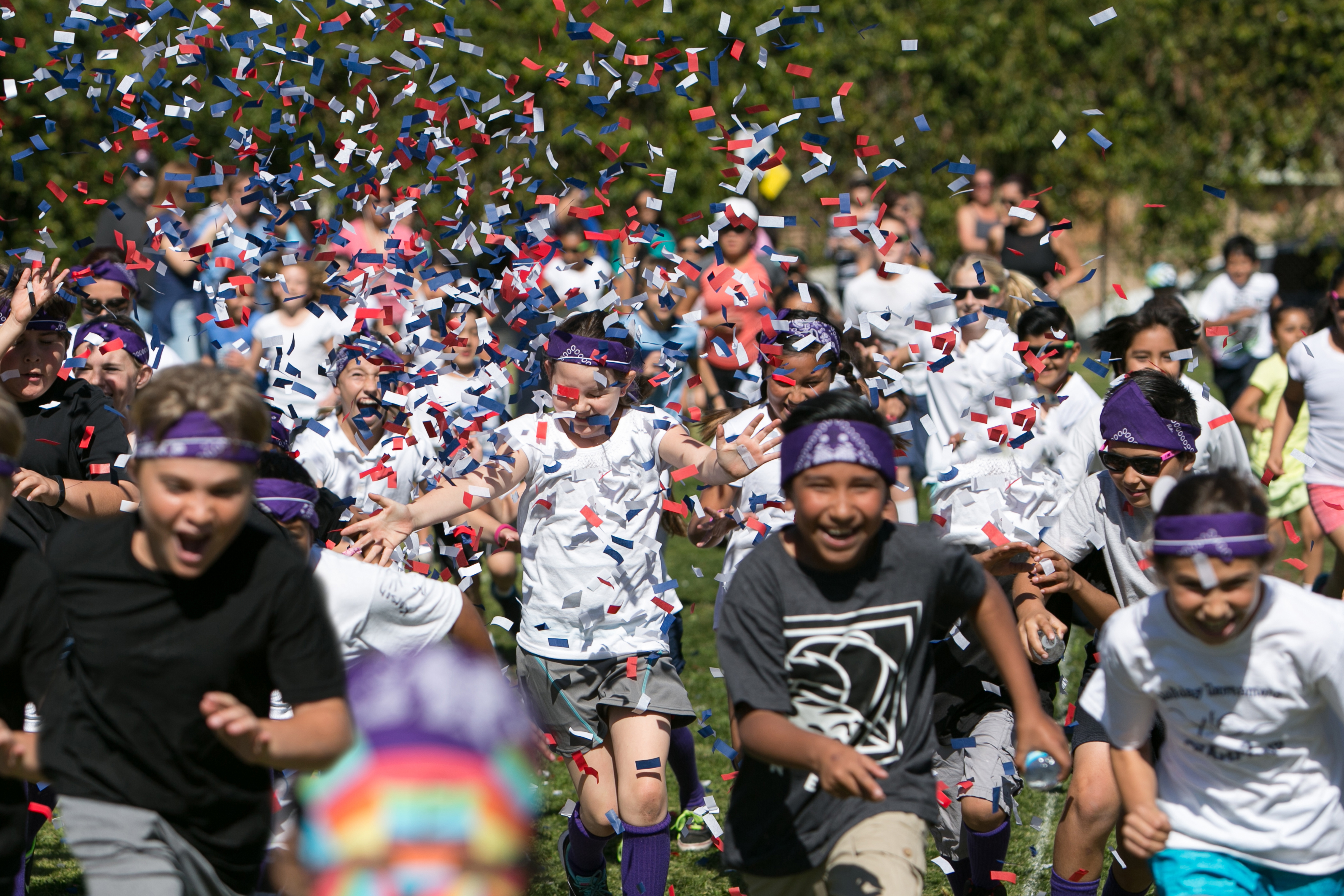 For the past seven years, Las Palmas Elementary has hosted the Jog-A-Thon to fund supplemental programs and materials for its students.

Typically more than 1,000 people attend the Jog-A-Thon—parents, children, Marine families and more—and each completed lap is recorded by volunteers.

Donors can sponsor the event with a flat rate or pay a certain amount for each lap a sponsored runner completes.

Last year the event raised $100,000, which was used to pay for Google Chromebooks, field trips and other supplies. The goal this year is to be able to establish a science, technology, engineering, arts and math (or STEAM) room and to flourish the computer lab.

This year’s goal is to bring in at least $70,000—of which the students in past years have raised $45,000 to $50,000, said Heather Borsuk, the president of the school’s Parent-Teacher Association. Businesses and family donations make up the rest of that. There are incentives for students to reach their fundraising goals, and the classrooms with the highest donations will be treated to various rewards.

“This is the largest fundraiser that we do throughout the year,” Borsuk said. “We are doing a STEAM lab so the students can go in and have tangible lessons to the curriculum. This is really up-and-coming.”

STEAM curricula is complemented by guest speakers who teach students to do more advanced work on computers, such as coding and working on various projects, Borsuk said.

This year’s Jog-A-Thon will take place at 8 a.m. on Friday, Feb. 26, at Las Palmas Elementary School, 1101 Calle Puente in San Clemente. This year’s theme is “Full STEAM Ahead.” Donations to the event are tax-deductible. For more information, call 949.234.5333 or visit www.lpes.capousd.ca.schoolloop.com.[/box]

The money also funds music and physical education programs that are not funded by the school district. Borsuk said without the money raised during the Jog-A-Thon, the programs and school field trips could be terminated.

“It’s hard for the teachers to get these kinds of lessons in the classroom because it’s such a big project,” Borsuk said.

Businesses and families sponsor the event, and each sponsoring business gets a sticker to place on their window to show their support and a listing in the school’s business directory.

“To be able to raise this kind of money, to be able to subsidize what the school district hasn’t been able to do for years and to stay up with the technology, it provides a huge privilege these kids wouldn’t have,” Jog-A-Thon organizer Colette Foster said.

Many of the children who attend Las Palmas do not have computers at home, Foster said. According to a fact sheet provided by the school, almost half of the school’s students are living at or below Orange County’s poverty threshold—49 percent qualify for free or subsidized lunches, and 40 percent speak English as their second language.

Organizers said providing the STEAM curriculum is a way to keep all students up to par with the fast-paced learning environment that comes with new technology. Since the introduction of the Chromebooks, Nelson said about half of the lesson plans have been digitalized.

“It’s revolutionized what’s going on (in the classroom),” Nelson said. “The kids who do have computers at home can get on their Google account and send their work to their teacher at night. But a lot of our kids don’t have the access at home.”

The members of the Retired Senior Volunteer Program, which helps patrol major events in San Clemente, and parent volunteers donate time on Tuesdays to assist Las Palmas students with homework and lessons. About 100 of the 850 kindergarten through fifth-grade students at Las Palmas are involved in the program.

“There are students who at some point … were not interested in what they were doing, and when they brought in the Chromebooks their whole attitude switched,” Borsuk said. “They do these project presentations and they were so into the project it completely reignited their interest in school.”

Before the Jog-A-Thon was created, parents had decided to eliminate most fundraisers at Las Palmas because of the constant solicitation of money from not just Las Palmas but other schools children may be attending, Borsuk said.

“This community didn’t like that feeling of always raising money throughout the year, so it was decided we would do this one, big thing,” Nelson said. “This is the only time we’re going to be coming around asking for money.”

Las Palmas has a unique culture compared to other schools in San Clemente and even in the Capistrano Unified School District.

Because so many of the students learn English as a second language, the school has molded its programs for decades in both English and Spanish within its Two-Way Language Immersion Program. Most of the Spanish-speaking families are from Mexico, but there are a few from Central American countries.

“Because of the power of this school … it’s still two languages, but in reality it’s one voice, and we’ve been embracing that,” Claudia Riley, the school’s English Learners’ Advisory Committee representative, said. “We make sure all the kids get help in English and in Spanish.”

Students who graduate from Las Palmas are often exceptionally proficient in both languages by the time they leave, Riley said.

“Especially the Latin community, they have responded very well (to the lesson structure),” Riley said. “We teach our children that every penny counts and all the efforts count to support the school.”

Foster said any additional cultural gaps have been quickly closing in the last few years, as the school has shown the fundraiser pays off.

“Once they see what it does for their kids, that’s what we want the parents to take away from this,” Borsuk said.

To be part of this school’s student body, children must live within the boundaries drawn by the district, and there is a waiting list that fluctuates between 25 to 40 students each year.

“We take neighborhood kids first, siblings second and after that it’s a lottery,” Nelson said. It’s not always exclusive, but “it is a lot of kids who don’t get in, which is a bummer.”

“I told my parents that it is our school and it’s part of the community,” Riley said.

Riley also works with parents to attend classes with such topics as nutrition and cyber safety. The PTA helps fund these adult education classes.

Las Palmas is one of the oldest schools in San Clemente and will celebrate its 90th anniversary next year.