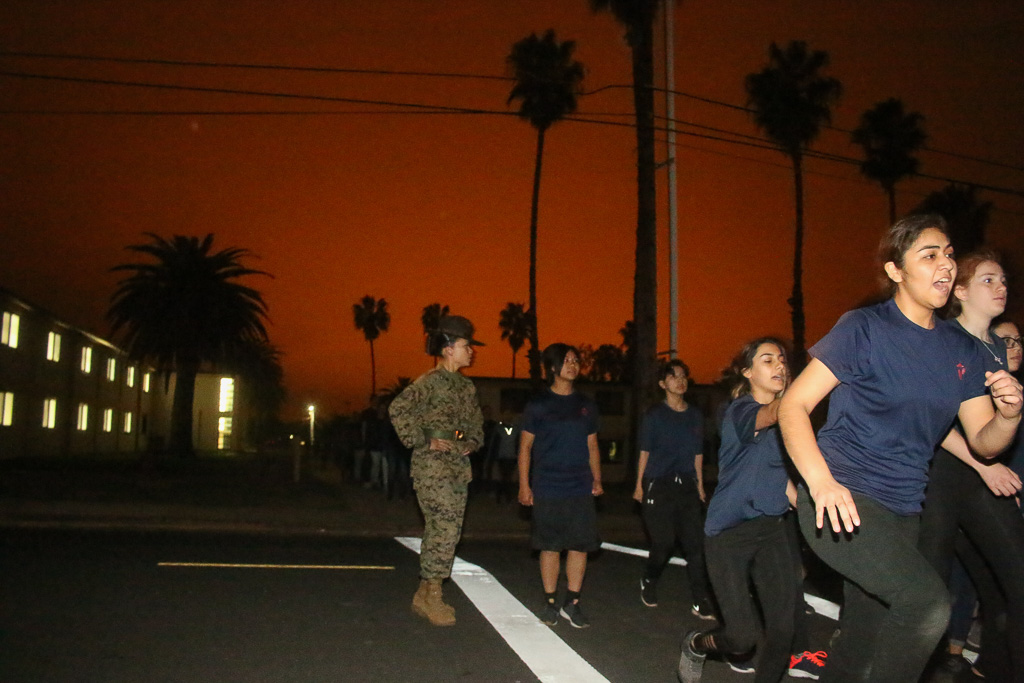 It was still and silent as fog crept in over the barracks at the military training base of Camp Pendleton in Oceanside.

At 0400 hours (4 a.m.), that tranquil environment was abruptly enlivened.

The stern and sharp voice of a drill instructor breaks the silence, commanding the future female Marines, who were at the training facilities in Oceanside for their first of two days.

About 150 women who were experiencing their first full day as part of the U.S. Marine Corps rapidly descended the stairs from their sleeping quarters. It’s evident some of the fresh faces are not used to being awoken in such a matter so early in the morning, but that will change. It must, if they’re going to succeed in this line of work.

Camp Pendleton officials invited members of the media to view the introduction on March 10.

Future female Marines start their introductory training in the early morning on March 10 at Camp Pendleton in Oceanside. This was the first time all Southern California recruiting stations combined efforts to train female Marines.

A drill instructor watches over future female Marines waiting in line for breakfast. The new Marines have about 10 minutes to shovel down their food before going straight back to training.

Future female Marines respond to their drill instructor during introductory training on March 10 at Camp Pendleton in Oceanside.

Future female Marines respond to their drill instructor during introductory training on March 10 at Camp Pendleton in Oceanside.

Sgt. Major Jason Politte of the Marine Corps Recruiting Station in Orange County, said the two-day introductory courses are designed to prepare the new Marines mentally and physically for what lies ahead.

“Specifically for this training, they arrived last night on Edson Range for some classes to mentally and physically prepare them for recruit training,” Politte said. “It’s exposure to drill instructors. We flew these drill instructors out from Parris Island, South Carolina to expose our female recruits to what it’s going to be like over a 24-hour period.”

The training that takes place encompasses a sample of what the newly joined Marines will encounter. Most of the drill instructors in the USMC are stationed on the East Coast.

“This teaches them about resiliency and how much they really know about themselves,” Politte said. “(They go through) a little bit of sleep deprivation, which I’m sure quite a few of them haven’t done before, or at least not in a long time.”

Sgt. Jessica Quezada, a combat correspondent and spokesperson for USMC who is the marketing and public affairs representative for Marine Corps Recruiting Station Orange, said this process is known as part of the “delayed entry program” before the future Marines are sent to formal training.

The delayed entry program can be used up to 365 days and USMC wants at least 30 days of delayed entry. This includes initial strength tests for both men and women.
Psychological evaluations are also conducted to make sure someone is fit for the Marine Corps.

Quezada said this was the first time all Southern California recruiting stations have come together for a female “poolee” (future Marines) function. She said functions take place throughout the year, but there are female-specific initial training sessions.

“I figured, I couldn’t just not go,” said one future female Marine who graduated from Trabuco Hills High School. She said she has really enjoyed her time thus far in the USMC.
Following the morning drills, the future Marines went through a leadership reaction course with 12 different stalls with different objectives that included problem solving and accuracy.

According to Capt. Christopher Harrison, an official with the Headquarters of the Marine Corps (HQMC), 8.7 percent of Marines are female, but the number can change frequently.

Article updated to reflect the most current data of female Marine percentage.