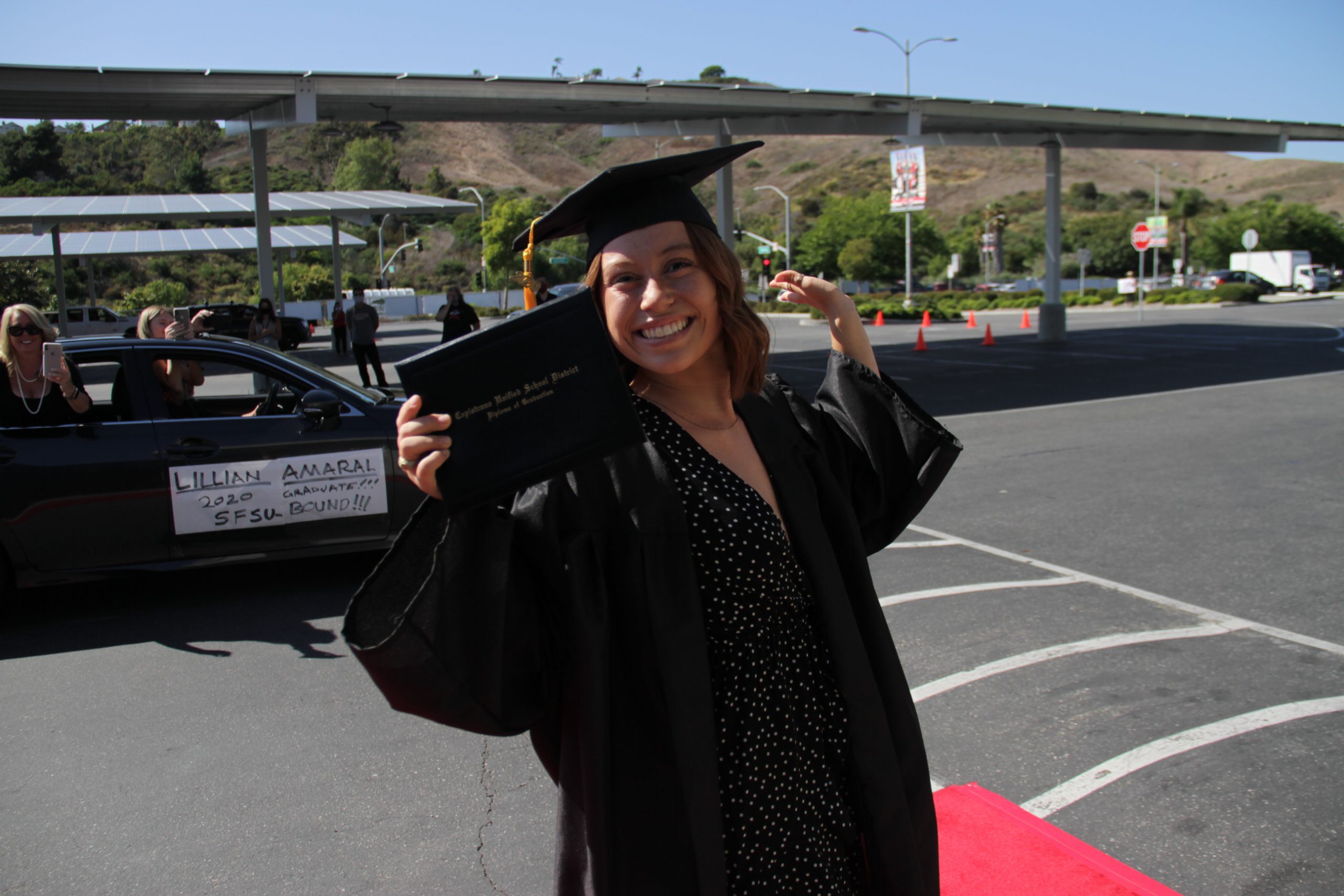 Photos and Story by Shawn Raymundo

San Clemente High’s Class of 2020 officially closed the book on their high school tenure this past week, as the graduating seniors were finally given a proper sendoff from the school—albeit a very socially distanced one.

Donning their caps and gowns, the students, with the help of their families, got to participate in a drive-thru commencement ceremony through the school’s parking lot. One by one, each student was dropped off to the red carpet, where they got to hear their names called before walking up the stage to greet district and school dignitaries, as well as pose for photos.

“Them gleaming from ear to ear, all their smiles, seeing this accomplishment in front of the families . . . in the end, it really was a celebratory event,” Principal Chris Carter said of the July 24 ceremony. “I couldn’t have been happier with the turnout.”

Families, staying in their cars, many of which were decorated to celebrate the student’s milestone and achievement, got to follow their respective graduates next to the stage, while taking photos and video.

“I felt that our families were able to put some closure on an extremely important part of their child’s life,” Carter said. “It seems like they enjoyed it, and we enjoyed it. I’m so happy with the outcome given the circumstances.”

After exiting the stage, the students could walk down to the end of the lot to pick up their diplomas. About 450 of the 680 graduating seniors participated in the ceremony, Carter said. Those who opted not to show will have their diplomas mailed to them.

The graduation ceremony was initially planned for early June; however, amid the coronavirus pandemic, San Clemente High, as well as schools throughout the nation, were forced to adjust, finding alternative ways to still honor the students.

With the desire of most families to still hold some form of in-person ceremony, the high school planned to hold a series of smaller commencements. However, that plan had to change this month, as cases of COVID-19 spiked in the U.S., and here in Southern California, prompting a rollback of some of the state’s reopening measures.

“We were not able do anything in person, so we had to shift relatively quickly,” Carter said. “So, we worked—all of our colleagues and activity directors within the district—to find a way where we can could bring everyone on our campus to have everyone recognized on a stage with their name called out, which is s rite of passage, to mark this milestone in their lives.”

As the families, with their graduates in tow, snaked through the parking lot, they could also tune into the radio to listen to the pre-recorded speeches and commencement addresses from Carter, Scholar of Scholars Adelina Awtry, fellow students Kassandra McDaniel and Alexandra Ruiz, and Senior Class President Jenna Yeam.

“As a principal, I understand how much this class had to sacrifice,” Carter said. “As hard as it was to see their senior year end as it did, I was excited to see them one last time . . . they will not take anything for granted as they progress on in their lives, and I think they’ll be all the better for that.”