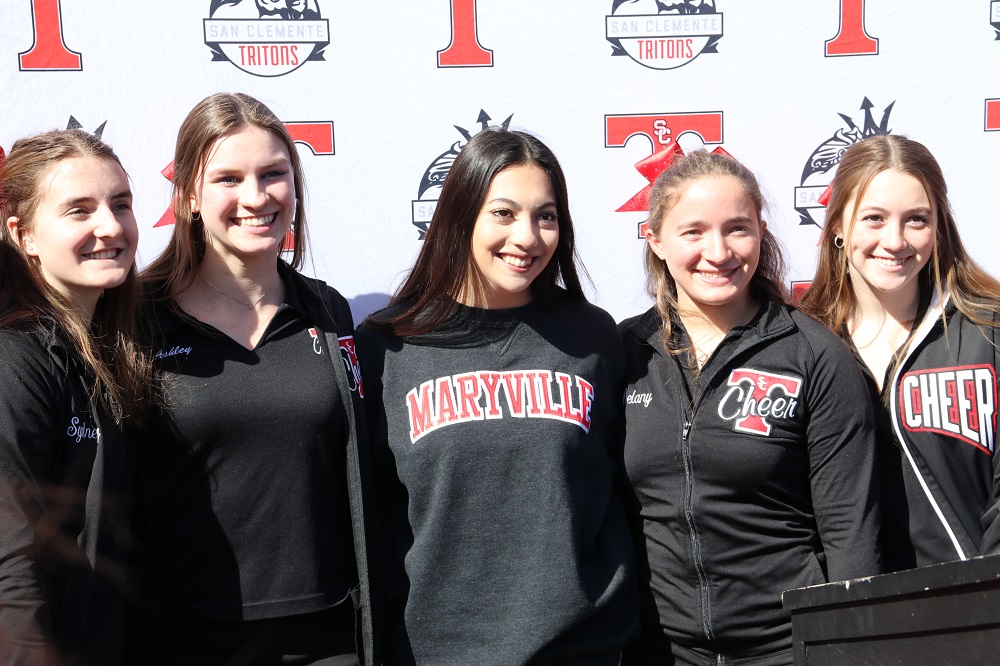 With a signature and a ceremony, San Clemente High senior Ryann Leff made history.

“I’m so excited,” Leff said. “Honestly, just for today, I’m so relieved that I got it done with and got everything out of the way. Being one of the first people to sign for cheer and having started a few of these teams at San Clemente High School, I feel really inspired for other people, other cheerleaders that will be coming up through this path.”

Leff was one of 25 student-athletes honored during a National Signing Day ceremony on Feb. 5 at San Clemente High School.

“STUNT goes against all the stereotypical pom-poms, cheering for a team, ‘hoorahs,’ skirts, bows, kicks and everything like that,” Leff said. “We consider ourselves athletes. We train like athletes, we practice, we compete like athletes.”

STUNT, known as “competitive sport cheer” in the CIF-Southern Section, has cheer teams compete in head-to-head competition. Teams learn the same set of routines and perform them side-by-side. Referees judge the routines and make deductions for mistakes, and the team with the least mistakes gets the point for that round. There are six rounds per quarter, and four quarters in a game.

“Cheerleading has never seen scoreboards,” Leff said. “We’ve never had referees. We’ve never had an audience of our own. It’s cool to experience that for ourselves instead of cheering on other teams.”

Leff’s signing is a breakthrough for the sport, which began its second year in CIF-SS and at San Clemente with practices on Monday, Feb. 10.

“I’m as proud of her as I was my own son,” San Clemente cheer coach Amber Smith-Stanco said. “The opportunity is really exciting, and I hope this inspires the rest of the team to look at that and pursue that at the college level.”

Going to college for cheer wasn’t something Leff had thought possible until this year. Leff began cheerleading as a young child and continued through to San Clemente High School. It wasn’t until Smith-Stanco formed the Tritons’ STUNT team that the avenue opened up and the opportunities arose.

“I can only say I’m so thankful for my coaches, my team and my previous cheer background,” Leff said. “I owe everything to everyone else. All my hard work is because they’ve pushed me and shaped me into the cheerleader that I am.”

Leff chose Maryville University after the school contacted her upon seeing Leff compete in a recruitment clinic in Northern California. Leff said she was attracted to the school because of STUNT, the location in St. Louis and the pre-law program, which Leff will begin in the fall.

For photos of all the athletes in Feb. 5’s Signing Day Ceremony, check out sanclementetimes.com. (Photo Gallery Coming Soon)

Here are all the athletes honored on National Signing Day: