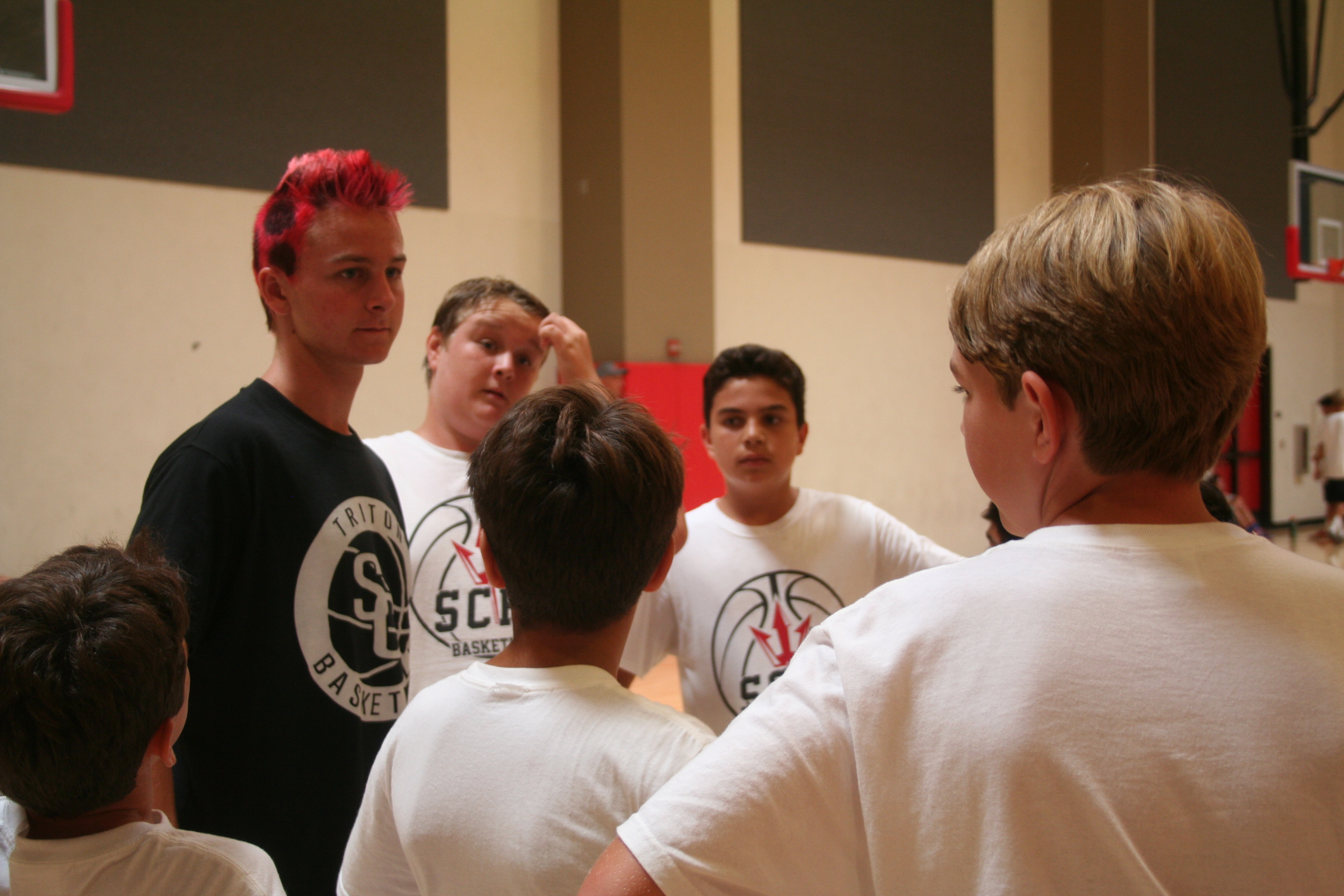 Giving Back to the Game

On a sunny Tuesday afternoon, Gage Shelmidine was in the humid San Clemente High School gym with over 50 kids under the age of 12 attempting to dribble basketballs. Shelmidine was easy to spot with his red and black Mohawk-styled hair looming over the kids, teaching basketball fundamentals and technique.

He watched the kids play in a scrimmage, celebrating every made shot like they were one of his own Tritons teammates. As the kids huddled around the San Clemente junior point guard, he gave instructions in the style of a high school varsity coach in the dying minutes of the fourth quarter. It was just another day in the life of the young volunteer.

This kind of volunteer work and care caught the eye of teachers at San Clemente High School, who nominated Shelmidine to represent the school at the Hugh O’Brian (HOBY) Southern California Leadership Seminar in June. The three-day convention was held at Chapman University, where over a hundred sophomores around Southern California listened to guest speakers, found out about different ways to give back to their community and met in small groups.

At the conference, Shelmidine wrote an essay and shared his life experience, learning how others, like him, give back to their communities. HOBY organizers were so moved by his essay, Shelmidine was nominated to represent Southern California at the HOBY World Leadership Congress at Loyola University in Chicago on July 19.

Shelmidine was chosen as one of 14 sophomores from San Clemente High School to write an essay for the HOBY conference back in June. Shelmidine’s essay focused on the hardships he has endured for most of his life.

Shelmidine was raised by his mom, Mindy, who was a drug addict until he was in the second grade. He currently lives with her in low-income housing in San Clemente. Between first and second grade, Shelmidine’s mom was in and out of prison and the two have survived on welfare and food stamps for most of Gage’s life. He says that his mom is the most important person in his life and she inspires him to help other people.

“The first two days (of the conference) I didn’t really talk in small group. But the third day I told everyone about my life and about my mom, then the kid next to me opened up about his mom too,” Shelmidine said. “It was really the first time I told a group of people about that stuff.”

Having endured such hardships Shelmidine learned to find peace in the sport of basketball. On the court, he has been characterized as a quiet leader but his passion for the game has allowed him to give back.

“He is one of the hardest workers I have ever been around and the kid loves playing basketball,” San Clemente High School head basketball coach Marc Popovich said.

Shelmidine has played club basketball since the fourth grade but couldn’t always afford to pay the fees to play. Some coaches would let him play for free. He says that so many people have made sacrifices for him to play that he feels the need to give back.

Since he was 12, Shelmidine has volunteered his time helping youth basketball camps around the South Orange County area.

“I just really like helping people and especially kids, it makes me happy,” Shelmidine said.

While Shelmidine spends most of his time coaching, he still makes time to work at the Dana Point Recreation Center as a youth basketball referee and adult kickball umpire.

The Southern California Hugh O’Brian board members saw Shelmidine’s leadership and devotion to others in the form of his submitted essay. They selected him as one of five individuals to travel to the world conference in Chicago on a scholarship.

“I’m definitely excited for this great opportunity and I can’t wait to meet people from around the world who will hopefully become my friends,” Shelmidine said.

Shelmidine says that this opportunity has helped him realize that he wants to pursue a career that revolves around helping others.