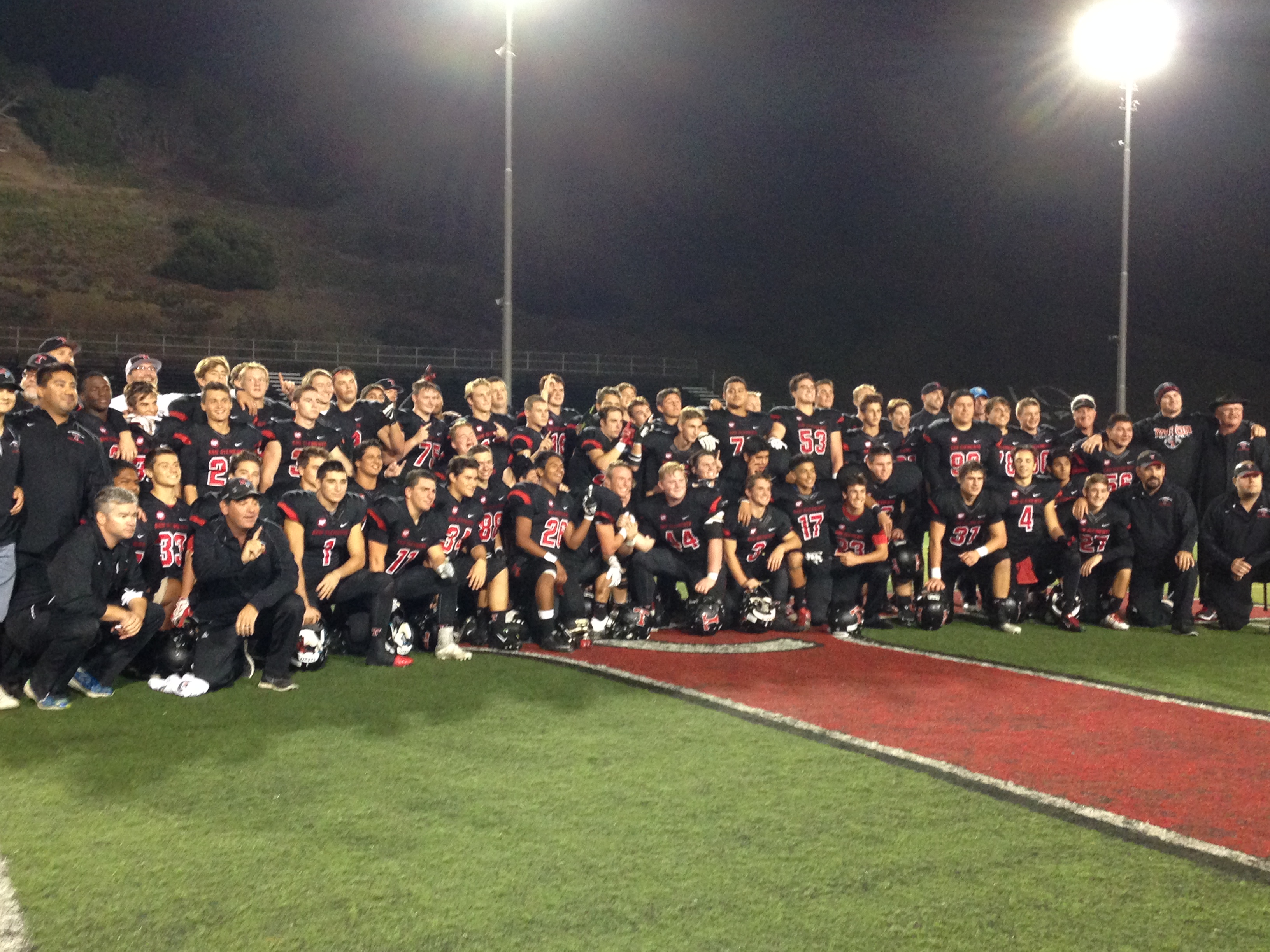 Both the San Clemente and Trabuco Hills offenses showed no signs of slowing down in the fourth quarter Thursday night at Thalassa Stadium. The two Sea View League opponents battled back and forth all night, with the Sea View League title on the line, and it was only a matter of time until one defense made a stand.

Trabuco Hills trailed by seven with just minutes to go and, after recovering a San Clemente fumble, drove down to the Tritons 5-yard line. Facing a fourth and goal, Mustangs senior quarterback Jimmy Jacobs hit his go-to target, senior receiver Jacob Breeland, on a slant route. But San Clemente defensive back Andrew Frohner sniffed it out, stopping Breeland one yard short of pay dirt, forcing a turnover and ensuring the Tritons held on for a 42-35 victory.

“They’d been going to Breeland all the time. He’s got probably 100 pounds on me. I was playing a little back so once I saw him cock back for that slant I just located him and tried to put my hat on him,” Frohner said. “It feels awesome.”

San Clemente has one game remaining on the schedule, a Nov. 7 tilt against Aliso Niguel. If the Tritons can defeat the Wolverines they will earn the league title outright.

Frohner also made what was, at the time, the biggest defensive play of the night four minutes earlier. Jacobs heaved a 31-yard pass to Breeland in the endzone and both he and Frohner came down with the ball. The play was ruled a touchdown, which would have tied the game up at 42-42, but after a lengthy meeting between officials, the call was overturned and ruled an interception-touchback.

Both offenses were firing on all cylinders for most of the night.

The Mustangs (5-4, 2-1) Noah Thompson scored the first of his three touchdowns on the night less than two minutes later.

With the score tied at 14-14, Tritons senior linebacker Riley Whimpey blocked a Mustangs punt, which was recovered by Gerardo Gomez to give San Clemente the ball at the Trabuco Hills 18-yard line. Sophomore running back Brandon Reaves scored on a one-yard burst to take a 21-14 lead.

But Jacobs and the Mustangs offense responded, scoring on a three-yard pass play to Thompson with just 27 seconds left on the clock to take the tie game to halftime.

Jacobs completed 22 of 36 passes for 319 yards and three touchdowns. Breeland had a game-high 12 catches for 197 yards.

In the third, San Clemente linebacker Liam Mills forced Jacob’s to make an awkward throw and it fell to Nathan Runolfson for an interception. Reaves broke off a 46-yard touchdown run four plays later to give San Clemente a 42-28 lead.

“Offensively I thought we were going to be able to score some points and be able to run the ball and we did. We ran some option (plays) to put a wrinkle in the game,” San Clemente head coach Jaime Ortiz said. “On defense, it would have been nice if we had a couple more stops but it is what it is. I told the kids at the end of the day it’s a win and that’s all that matters.”