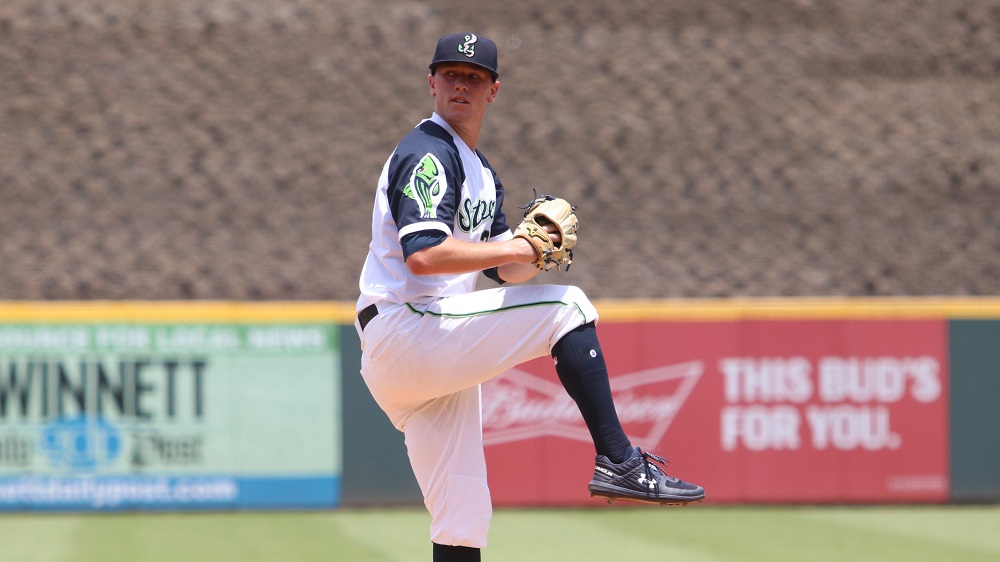 Going Pro: Checking in on Former Tritons in Professional Baseball

With summer in full swing, perfect baseball weather is now upon us in San Clemente and all over the country.

Let’s check in on some former San Clemente Tritons battling through the ranks of professional baseball:

The 21-year-old left-hander rose quickly through the ranks of the Atlanta Braves system to make his MLB debut last season in a win over the Miami Marlins on July 31. Allard, 2015 SCHS graduate, also collected his first MLB hit in that game.

That was Allard’s only start and one of three appearances with the Braves so far. Allard posted a 1-1 record with 11 earned runs allowed over eight innings.

Allard, ranked the No. 8 prospect in the Braves’ system, is on Atlanta’s 40-man roster this season and has continued pitching with the AAA Gwinnett Stripers.

In his latest outing on June 30, Allard took a no-decision against the Indianapolis Indians after five innings pitched with one earned run allowed and six strikeouts.

The 27-year-old right-hander has been consistent in his position in the Oakland Athletics system.

Friedrichs, 2010 SCHS graduate, was drafted out of Long Beach State by Oakland in the 2015 seventh round and has split most of the last four seasons between the Advanced-A Stockton Ports of the California League and the AA Midland Rockhounds.

This season, Friedrichs opened at extended Spring Training with the Athletics and started his minor-league season in Stockton. Friedrichs didn’t earn a decision in three starts with the Ports, but he was strong in just 10.2 innings pitched with only four earned runs, three walks and eight strikeouts.

After being assigned back to Midland, Friedrichs has made nine starts with a 3-3 record. In 50.2 innings pitched, Friedrichs has allowed 19 earned runs with nine walks and 30 strikeouts. On Monday, July 1, Friedrichs allowed one run over eight innings with six strikeouts in a win over the Amarillo Sod Poodles.

After only four-and-a-half seasons in professional baseball, the 22-year-old catcher is no longer on an affiliated minor league roster.

Herbert, 2015 SCHS graduate, was selected in the 2015 second round by the Braves and was considered one of the better defensive catchers in the draft. However, Herbert struggled to find his hitting stroke.

After just three games with the rookie Gulf Coast League Braves in 2015, Herbert hit .185 and .243 in two seasons, respectively, with the Class A Full-Season Rome Braves from 2016-17 and hit .202 last season with the Florida Fire Frogs.

Herbert was released at the end of this season’s Spring Training. Herbert hooked on with the Washington Wild Cats of the independent Frontier League and signed a minor-league contract with the Arizona Diamondbacks on June 6.

Herbert was assigned to the Class A Short-Season Hillsboro Hops but played only five games, the last on June 24. He went 7-for-21 at the plate with three doubles and a triple. Herbert is no longer listed on the Hops roster.

The 22-year-old right-hander is in his first full season of professional baseball.

Tribucher, 2015 SCHS graduate, was drafted by the Colorado Rockies last season and played 20 games for the rookie Grand Junction Rockies. Tribucher posted a 4-2 record in 20 appearances with a 2.32 ERA in 31 innings pitched.

This season, Tribucher made five appearances with the Class A Short-Season Boise Hawks. Tribucher has no decisions on his record with six earned runs allowed in 6.1 innings pitched with seven strikeouts.

Andre Pallante, 2016 SCHS graduate, was drafted out of UC Irvine by the St. Louis Cardinals in the fourth round and made his professional debut with the Class A Short-Season Spikes on June 29.

Pallante earned his first win with two innings pitched in relief with no runs and one hit allowed.

Tanner Brubaker, 2016 SCHS graduate, was also drafted out of UC Irvine by the Minnesota Twins in the 11th round and was assigned to the rookie advanced Elizabethton Twins on June 27.