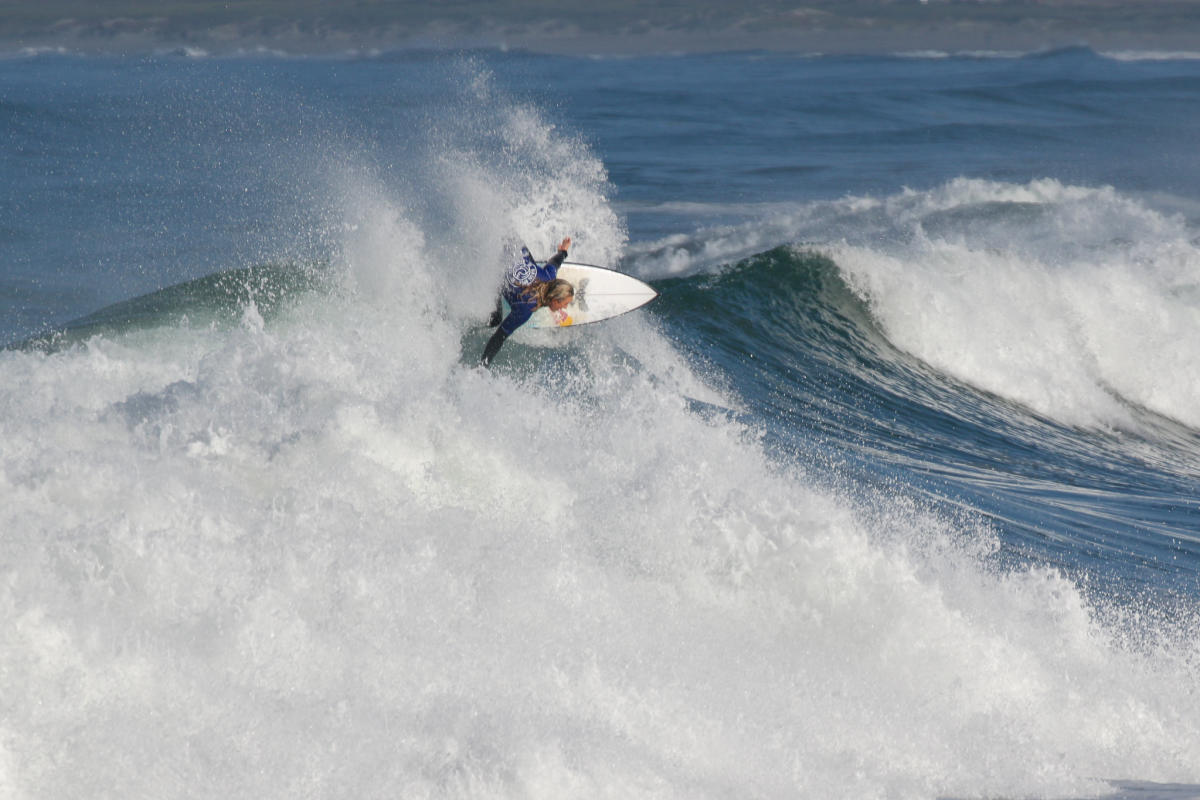 It was a big weekend for San Clemente surfing at the SLO Cal Open in Monterey Bay, as a pair of local ladies finished 1-2 in the final.

Taking her first-ever WSL victory, Izzi Gomez dug deep to hold off an in-form Sawyer Lindblad on the Central Coast. A five-time stand-up paddle world champion, Gomez is no stranger to standing atop a podium, but nonetheless, this was a big moment in the 20-year-old’s young career.

“I’m baffled,” she said, laughing afterward. “I never expected this, and it’s incredible to win with my brother and mom here. I’m in shock right now, but paddling back out with about a minute and a half left, I saw Sawyer on the inside looking for a score, and I just thought, ‘Please don’t get a wave.’ I just can’t even believe this happened.”

Lindblad was looking to make it two straight victories on the WSL Qualifying Series after winning the SLO CAL Open at Pismo Beach in February. Only 14 years old, she’s already proving to be a threat among the professional ranks.

“I never would’ve guessed this kind of start, and 2020 has been really good to me so far,”  Lindblad said after the competition. “Now I’ll just train harder, surf more and try to keep this momentum going. It’d be insane to see myself toward the top of the rankings at the end of this year, because I really want to get into the higher-rated events next season.”

Up next, Lindblad will turn her attention to the Jack’s Surfboards Pro in Huntington Beach. And there’s more competitive action on tap, as the WSL season is starting to kick into overdrive.

In other Qualifying Series news, the Surfest Newcastle Pro is taking place at Manly Beach in Australia this week. The surf was absolutely pumping in Round 1 as local surfers Patrick Gudauskas, Cole Houshmand, Kei Kobayashi, Jett Schilling and Crosby Colapinto enjoyed the epic conditions and made their heat.

“Surfing in the first round today was a total bonus,” Gudauskas said. “I rocked up and saw it was six foot and barreling and was so happy to surf. It reminded me of surfing on the Championship Tour, because you really had to remind yourself to relax and let your surfing do the talking. It’s so sick out there, I’m stoked to be in Round 1 and make it. This is the perfect start to any event. I’m stoked.”

The WSL’s Championship Tour kicks off later this month on Australia’s Gold Coast with the Corona Open Gold Coast at Snapper Rocks. Heading into the season ranked fifth in the world, San Clemente’s Kolohe Andino is looking for another successful season on tour, as well as preparing to represent the U.S. when surfing makes its Olympic debut at the 2020 Tokyo Games.

Also on tour for another lap around the world will be Griffin Colapinto. The waiting period gets underway on March 26.