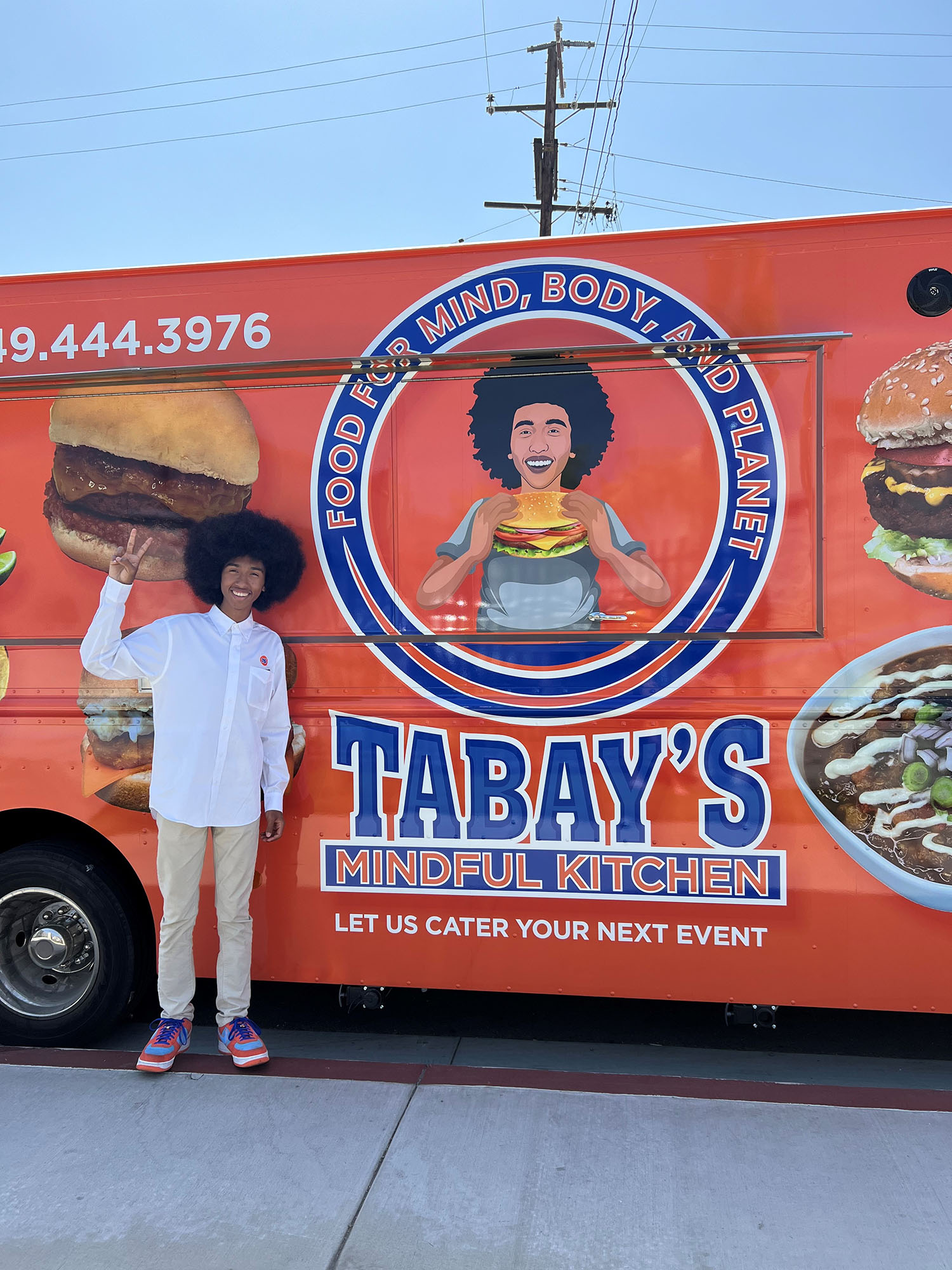 Tabay Atkins, a San Clemente native and one of the youngest professional yogis in the world, has always been ambitious and busy, spending time teaching yoga, vegan cooking classes, and making guest appearances.

For his next venture, he thought, why not open a food truck?

The truck, called Tabay’s Mindful Kitchen, has already been operating in a “soft opening” fashion for the past couple of weeks, as Atkins has taken time to acclimate to cooking for a large audience. The grand opening will be Sunday, July 10.

“The last time I spoke with the SC Times (in September 2021) was when this was just an idea,” Atkins said. “Now it’s reality … and it’s been a big hit already.”

What started on a whim steadily developed over the past year, as Atkins and his mother, Sahel Anvarinejad, planned out the food truck’s design, inside and out, and the menu. They followed the truck’s construction from scratch and the installation of all brand-new appliances, all the way to designing the wrap on the outside that displays pictures of the offerings.

The food truck was set up, and will remain, at the 76 fuel station in Capistrano Beach that Atkins and his mother inherited on Jan. 1 from his grandfather, who previously owned it for more than 50 years.

The impact of the food truck’s location is not lost on Atkins, who grew up nearby and described the surrounding communities of Dana Point and San Clemente as deeply close to him. He added that it was great for people who have known and seen the family around for three generations to remain in the area.

“Now, we get to share our food with this community here and with our customers of the station, and (get to introduce) them to this amazing vegan food,” said Atkins.

His favorite item on the menu, along with burgers, chili cheese dogs, and poke bowls they serve, is “Everyone’s Phavorite Pho,” a Vietnamese broth dish that has long been one of his preferred meal choices and was included in his e-book’s top 10 most popular recipes.

After yoga became a substantial part of Atkins’ life when he was 7 years old, veganism naturally followed, he said, because the principles and values of both were so closely aligned.

In August 2017, he became fully vegan, and incorporated those kinds of meals into his cooking for himself, video classes and events.

“Since I was already a chef before being vegan, I took my culinary skills that I already had, transformed it to vegan cooking, and started teaching people how to make their own food that is better for your health, better for the environment, and for the animals,” Atkins said.

He takes pride in showing people that being vegan doesn’t mean they have to miss out on their favorite foods or flavors. When crafting the food truck’s menu, he made sure to select popular, comfort foods that people were already familiar with and would be sure to enjoy.

Despite his experience, Atkins acknowledged that running a large-scale operation was new to him, which is why the past weeks have been crucial to his preparation for a new environment.

He added that he’s excited to meet people and introduce his concept to the community.

Atkins will also give away Nike yoga mats on Sunday, as part of the support he’s enjoyed from the brand since partnering with the athletic wear company in 2021.

He feels that he has grown significantly in the past year, both regarding yoga and cooking.

Within his yoga practice and teaching, he has started to teach more philosophically and use yoga as the way it was designed, according to Atkins—as a way to learn philosophy and incorporate it into his and others’ lives.

“I’ve grown a lot more in my cooking skills since opening the food truck, from being able to cook good to being able to cook really fast and being able to mass produce a lot of food at once,” he added. “Because I used to cook for events, but now it’s just nonstop cooking for people as they show up (at the truck).”

Atkins plans for the operation to be his main focus as it kicks into gear, but he will also remain involved in his yoga practice, his endeavors as a nutritionist, and other activities.

Above all, he said he will not define success for the food truck as monetary, but in terms of getting people to know that they can eat healthier, whole or vegan foods without sacrificing the things they love.

“A lot of people have a misconception in their mind that, you know, vegan food is boring, vegan food is gross,” Atkins said. “But really, I’m making all the food and we’ve only had a few vegan customers, actually. Everyone else is non-vegan and they love the food.”

In some circumstances, Atkins said, people who ate from the truck couldn’t believe what they had consumed was vegan, as an example that the offerings couldn’t easily be identified as vegan by their appearance or even taste.

The food truck is parked at the intersection of Doheny Park Road and Victoria Boulevard, open from 10 a.m. to 6 p.m. Nike will give away free yoga mats to the first group of customers on Sunday.

More information about Atkins’ story, as well as cooking tutorials, can be found at tabayatkins.com.