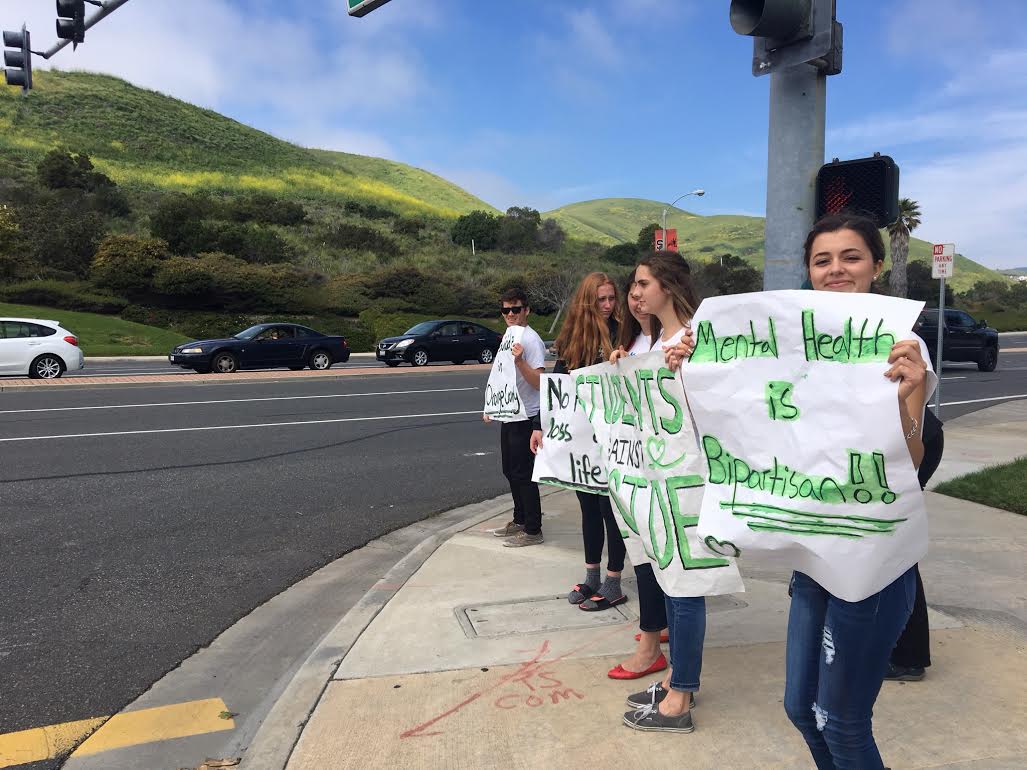 If you were driving through one of South Orange County’s busy intersections on Saturday, you may have noticed the signs.

“Mental Health is Bipartisan.” “Be the Change.” “#BreaktheSilence.” “Students against Suicide.”

The Green Ribbon Club, a San Juan Capistrano-based 501(c)(3) nonprofit focused on spreading awareness of mental health issues, held five demonstrations across South Orange County on March 18 in response to a string of recent suicides in the area. About a dozen students gathered at the corner of Avenida Pico and Calle Frontera in San Clemente—as well as in the neighboring cities of Dana Point, San Juan Capistrano, Ladera Ranch and Laguna Beach—to show support for community mental health.

The Green Ribbon Club is a volunteer-led, grassroots advocacy organization that aims to reduce the stigma surrounding mental illness in Orange County. Comprised of South Orange County students and recent graduates who have lost friends to either suicide or addiction, the club’s hope is to begin reducing the number of suicides and overdoses within the community by making mental health a household discussion.

According to club organizers, four youth suicides occurred in South Orange County within the first three months of 2017. With suicide rates on the rise in Orange County, demonstrators aimed to get the attention of local politicians and community leaders and encourage them to prioritize community suicide prevention.

Nonprofit chairman and CEO Brian McInerney, of San Juan Capistrano, said Saturday’s demonstrations went well, with more than 30 participants between the five cities working to begin a public discussion in each community about mental health.

McInerney said student club members have put $2,000 of their own money into the nonprofit as startup capital, and now their focus is on fundraising, recruiting additional staff and finding board members to serve on their board of directors.

“We hope to start student clubs in at least two high schools within CUSD by the coming fall,” McInerney added.