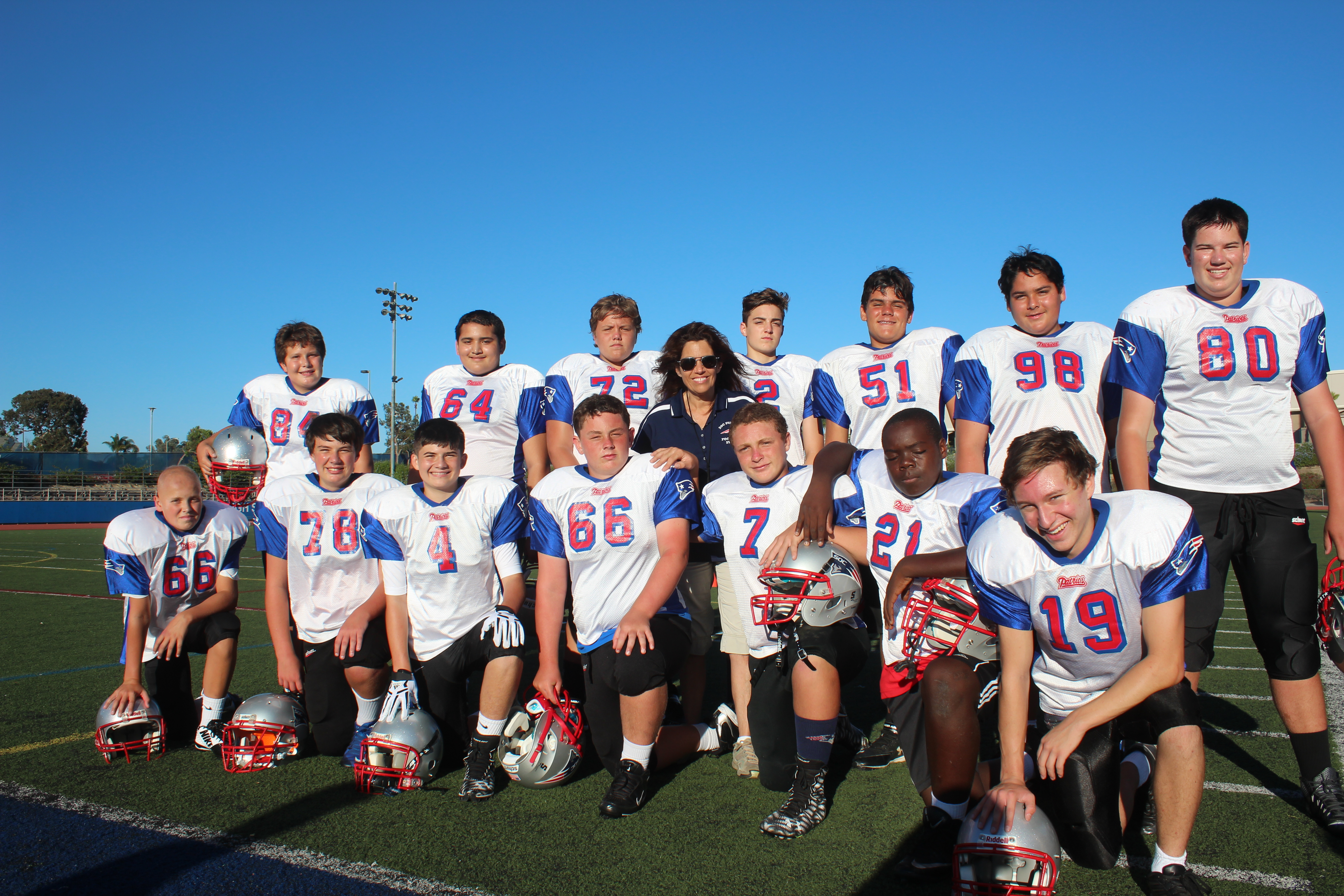 Mikki St. Germain’s passion in life is the thrill and satisfaction she gets from inspiring people. There’s that, and football, too.

The San Clemente resident, who has spent the last 21 years as a martial arts instructor, inspirational speaker and author, now has the chance to combine her two passions this year as the head coach of the South Orange County Patriots midget-level football team.

St. Germain, who spent last season as an offensive coordinator with the South Coast Tritons in San Clemente, is the first female head coach in the SOC Patriots organization’s history.

When St. Germain first met with her team of 14-year-olds, many of whom tower over her in size, it was unclear how they would react to her being the coach. She had built a comfort level with several players who transitioned from the Tritons to the Patriots over the offseason, but there were still plenty of unfamiliar faces in the crowd. Turns out the players weren’t fazed by who was holding the whistle.

“They didn’t even flinch. None of them (did). They just really kind of accepted it and that was it,” St. Germain said.

St. Germain is a native New Yorker and developed her passion for football by watching the New York Giants with her father on Sundays. Football immediately struck a chord with St. Germain and she became a student of the game, dissecting its intricacies.

The camaraderie on display amongst a football team was also a big draw for St. Germain. She began to see links between her life’s work—public speaking and writing—and the game she loves.

“I truly believe that a coach’s responsibility is to help that person get past their comfort zone and believe in something they don’t think they’re capable of doing,” St. Germain said. “Our jobs are more involved than just teaching X’s and O’s. It’s making them believe and having them come together as a team.”

St. Germain has received almost entirely positive feedback since she stepped on the sidelines. As volunteer coaches, St. Germain and her husband, Gerard, have seen how supportive parents and players can be. But there have been minor slights along the way. Gerard St. Germain recalled how last year, some coaches would not shake Mikki’s hand after games. One family almost withdrew their son from the team after learning that St. Germain would be an assistant, but eventually came around.

In the professional sports world, female coaches in mostly male-dominated sports have been garnering attention. Last year, Becky Hammon made NBA history when she was hired as an assistant coach for the San Antonio Spurs. On July 27, the Arizona Cardinals hired Jen Welter to be a training camp/preseason intern coaching inside linebackers, making her the first woman to hold a coaching position in the NFL.

“I’d like to think that it doesn’t matter whether you’re male or female. I think anybody that steps up to do their passion … I have to commend that person,” Mikki St. Germain said. “In this day and age, there’s so much to offer all the way around that if you have a chance to inspire or offer something new or you have a gift to put out there … do it.”

Owen Carlton, 14, who lives with his family on Camp Pendleton, is one of the former Triton players St. Germain coached last season. Carlton, the team’s quarterback, saw last year’s group of players accept St. Germain as a coach and thrive under her guidance.

On Aug. 4 Carlton and his teammates were out on the field in pads for just the second time this preseason, full of confidence, and gearing up for their eight-game season in September.

“I feel a lot more comfortable at quarterback knowing that (St. Germain) trusts me to lead the team,” Carlton said. “I was so happy (this year) because I knew they were great coaches and it was going to be good this year. I think we’re going to win the championship.”