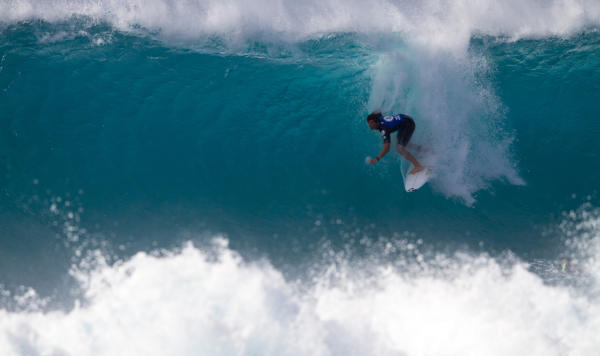 Sometimes it’s not the final result, but who you beat along the way. Last week ,Griffin Colapinto finished third in the Volcom Pipeline Pro, which is reason enough to celebrate, but considering that he beat a couple of giants of the sport along the way, well, that’s something special.

In the semifinals in tricky Pipeline conditions, Colapinto drew reigning world champion John John Florence; who’s also won the contest multiple times and is considered by most pundits to be the best Pipe surfer on the planet. Needless to say, the odds were not in Colapinto’s favor.

In the dying seconds of the heat, Florence maintained a slim lead on Colapinto, but as is so often the case in competitive surfing, in the end it came down to Colapinto being in the right place at the right time. A set steamed through the lineup. Colapinto paddled into a gem, locked into a huge Backdoor barrel and came flying out with the spit. The judges threw him a 7.37 score for the effort, which was enough to upset Florence and earn a spot in the final.

In the end, it was Australian Soli Bailey that took the win, with former world champ Adriano De Souza taking second, Colapinto in third, and one-time Pipe Master Bruce Irons rounding things out in forth.