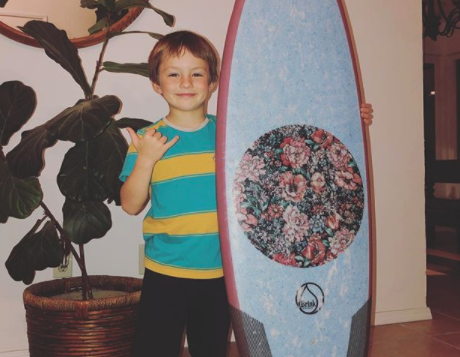 Only 5 years young and already frothed out, it’s hard to imagine there’s anyone around town these days having more fun than Rex Hoffman.

If you were wondering how to pass the time during some of these slow, lockdown days, look no further than the little goofy-footer for inspiration. Having a ball in the micro surf we’ve had on offer lately, his surf game is getting strong at spots such as Salt Creek and Capo Beach.

But maybe it shouldn’t come as a huge surprise given his DNA. His older sister, Indie, is already on her way. Sponsored by Sistrevolution, she’s a stylist on any board and has been putting her time in learning how to shape from Josh Martin.

And then there’s the whole Hoffman legacy, including true originals Walter and Flippy Hoffman, and barrier-smashing Joyce Hoffman.

Before the world went on lockdown, Rex posted a big win at the Surf for the Sea in the Micro Groms 6-and-under division. And when he’s not absolutely shredding in the water, Rex keeps himself busy on a snowboard, skateboard or dirt bike, or even by snagging fish.

It’s a grom’s life, and Rex is living the dream.