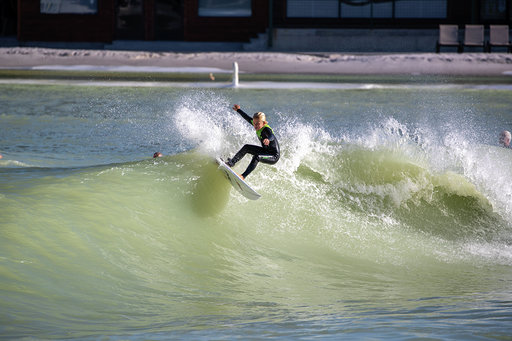 Growing up the son of one of surfing’s most esteemed surfboard builders, River Biolos undoubtedly was going to find his way into the ocean sooner rather than later. Learning to surf at 4 years old at Doheny, River was pushed into his first waves by his famous father, Matt—and now they can’t get him out of the water.

“Surfing inspires me to see the world and surf many different places,” River says. “I was technically forced to surf, because my dad owns a surfboard business. But once I learned how, I realized it is really fun and how much I enjoy it.”

Currently finishing fifth grade at Concordia Elementary School in San Clemente, River, like all of his other classmates, has been making the most of the remote learning that the schools have implemented. And when the computer work is done, it’s time to surf.

“These days, I either surf at Trestles, or I like to go to the pier,” River says.

Looking up to local heroes such as Griffin Colapinto and Kolohe Andino, River’s already ripping.

“My favorite thing about surfing is that feeling you get after you do a sick, two-turn combo or an air for the first time,” he says. “It makes you just feel happy and excited to do more.”

In terms of where he sees his surf life taking him, the future is wide open.

“In 10 years, I think surfing will take me to a good enough level so that I can travel and surf really good waves,” River says. “I never really want to be a professional surfer or snowboarder, because my purpose in life is to keep the family business running, and that is what I will try to teach my kids when I grow up.”

Grom of the Week: Jake Vandenburg