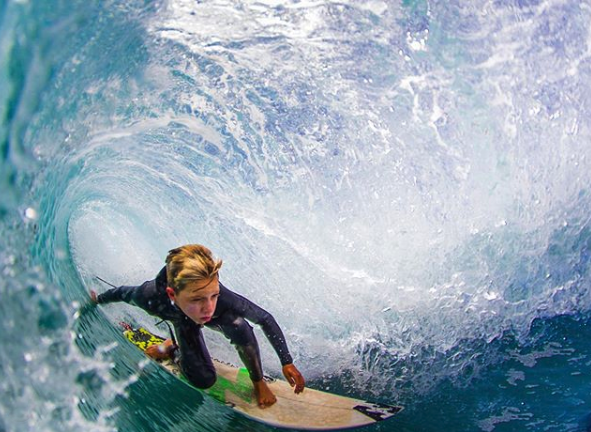 One of the best things about writing the Grom of the Week item is not just being able to shine light on some of our communities’ brightest little legends, but also seeing them grow up and accomplish great things.

Cannon Carr’s not grown up yet, but he’s definitely not the pint-sized grom who used to pull into overhead barrels on three-foot days at Riviera. Recently turned 13 years old, the kid’s been on the up and up all year long, and it’s epic to see the path he’s blazing.

To kick the summer off, Cannon earned himself a fourth-place finish at the U.S.A. Surfing Championships at Lower Trestles. But he was just getting started. He then went on to finish third in the Open Boys division of the NSSA National Championships in Huntington Beach.

Most recently, Cannon just made the trip down to Australia to compete in the Skullcandy Oz Grom Open, where he once again made the final. The surf was pumping with long, right-hand walls on offer. Putting all of his Trestles experience to good use, he was absolutely ripping.

It’s going to be epic to see what he does next. And younger brother Carson isn’t far behind.