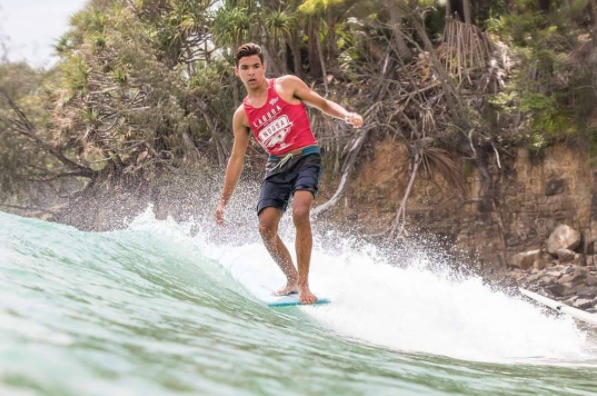 Grom of the Week: Kaimana Takayama

When your last name is Takayama, paddling out on a longboard takes a certain amount of poise. Eighteen-year-old Kaimana Takayama has it in spades.

Descendent of the timeless stylist and master surfboard craftsman, Donald Takayama, the wave-riding DNA is strong in young Kai. Growing up in San Clemente, he calls San Onofre his cross-stepping stomping grounds, but he is quickly garnering international acclaim.

Earlier this month, he headed down under for the Noosa Festival of Surfing and came away with some head-turning results. Taking first in the Men’s Open Amateur division, he upset a talented field of Aussies, Americans and Hawaiians to take the title. But he wasn’t done there. Surfing in the highly competitive Noserider Pro division, where he was pitted against some of the most talented longboarders in the world, he managed to finish a very respectable third place.

It makes sense that a kid that grew up under the watchful eye of “Uncle Donald” and can give Old Man’s a better going over than just about anyone would enjoy such success at Noosa. Considered the epicenter for Australian longboard surf culture, for an 18-year-old kid to land on the Sunshine Coast and have that kind of an impact speaks volumes about the trajectory of his career. Keep an eye on Kai, he’s going to be gliding into all kinds of new and interesting places in the months and years to come.