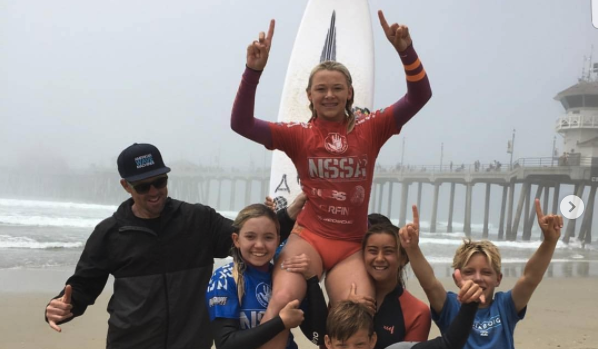 The National Scholastic Surf Association’s (NSSA) West Coast Championships hit the south side of the Huntington Beach Pier over the weekend, and two of San Clemente’s finest came away with convincing wins. It’s like splitting hairs, but Grom of the Week honors go to Kirra Pinkerton, who won her second consecutive open women’s title. She also placed second in the Open Girl’s division.

Thanks to playful three- to four-foot surf, local South County surfers had a field day in the decidedly less-sharky waters.

Kade Matson continues to be on a huge roll, winning both the open men and open juniors divisions. Kei Kobayashi joined Matson in the open men’s final, finishing fourth. Hayden Rodgers won the air show and found his way to a very respectable fourth-place finish in the open boys. And lil’ Cannon Carr was flaring in the open mini groms, where he came away with a big win.

Sawyer Linblad and Bella Kenworthy went one and two, respectfully, in the open super girls final.

Congratulations to all surfers on their successes and accomplishments over the weekend.