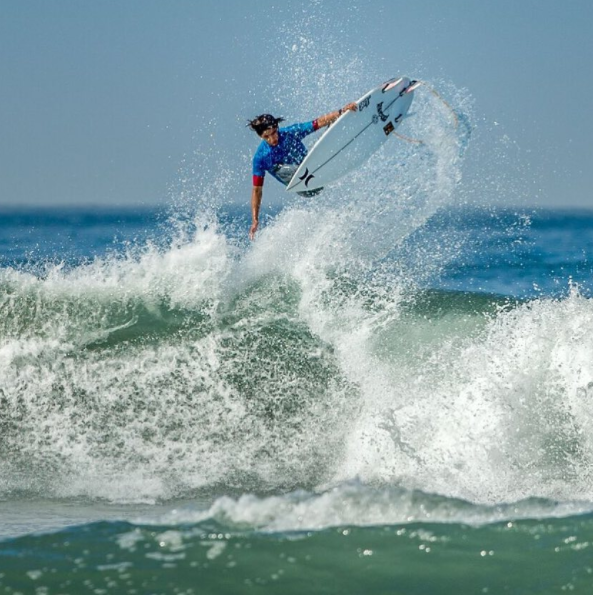 Standing out at Lowers isn’t easy, but Nico Coli’s been doing an admirable job as of late. A Shorecliffs Middle School graduate, the young goofy-footer has been logging ample water time this summer and preparing for all the big things coming up down the line.

“Summer has been going great, I have been surfing Lowers a lot, Rivi and Lost Winds or anywhere that looks fun, usually with my friends Liam Murray, Kade Matson and Crosby Colapinto,” Coli said.

Given that he’s running with some of the most talented groms in San Clemente, Nico’s keeping pace. Logging some solid results on the NSSA circuit this last season and a third-place finish at the Rip Curl North American GromSearch National Championships, he’s also been selected to be a part of the USA Surfing Junior National development program.

“I am honored to have been chosen to be a member of the USA Jr. Surf Team, and now that surfing is an Olympic sport, it’s even more of a responsibility to represent USA Surfing,” Nico said. “We’ve been training almost every Thursday at Oceanside Harbor with USA surf coach Joey Buran and with team members like Taj Lindblad, Nick Marshall, Kade Matson, Levi Slawson, Kirra Pinkerton and a few more rippers.”

In addition to his involvement with the U.S. National team, Nico dreams of someday joining the elite ranks of the WSL Championship Tour. Looking up to some of San Clemente’s most established surfers, including the Gudauskas brothers, Kolohe Andino, Ian Crane and Chris Ward, in the immediate future he’s hoping to try his hand in a few Pro Junior events before setting off on the WSL’s Qualifying Series.

“Then hopefully win a world title,” he added about his long-term aspirations.

Hardly a one-trick pony, out of the water Nico’s a shutterbug.

“Outside of surfing, I’d like to be a camera collector,” he said. “I like using old-school cameras. It’s just this little hobby that I have for when I travel to take pictures with weird cameras and films.”