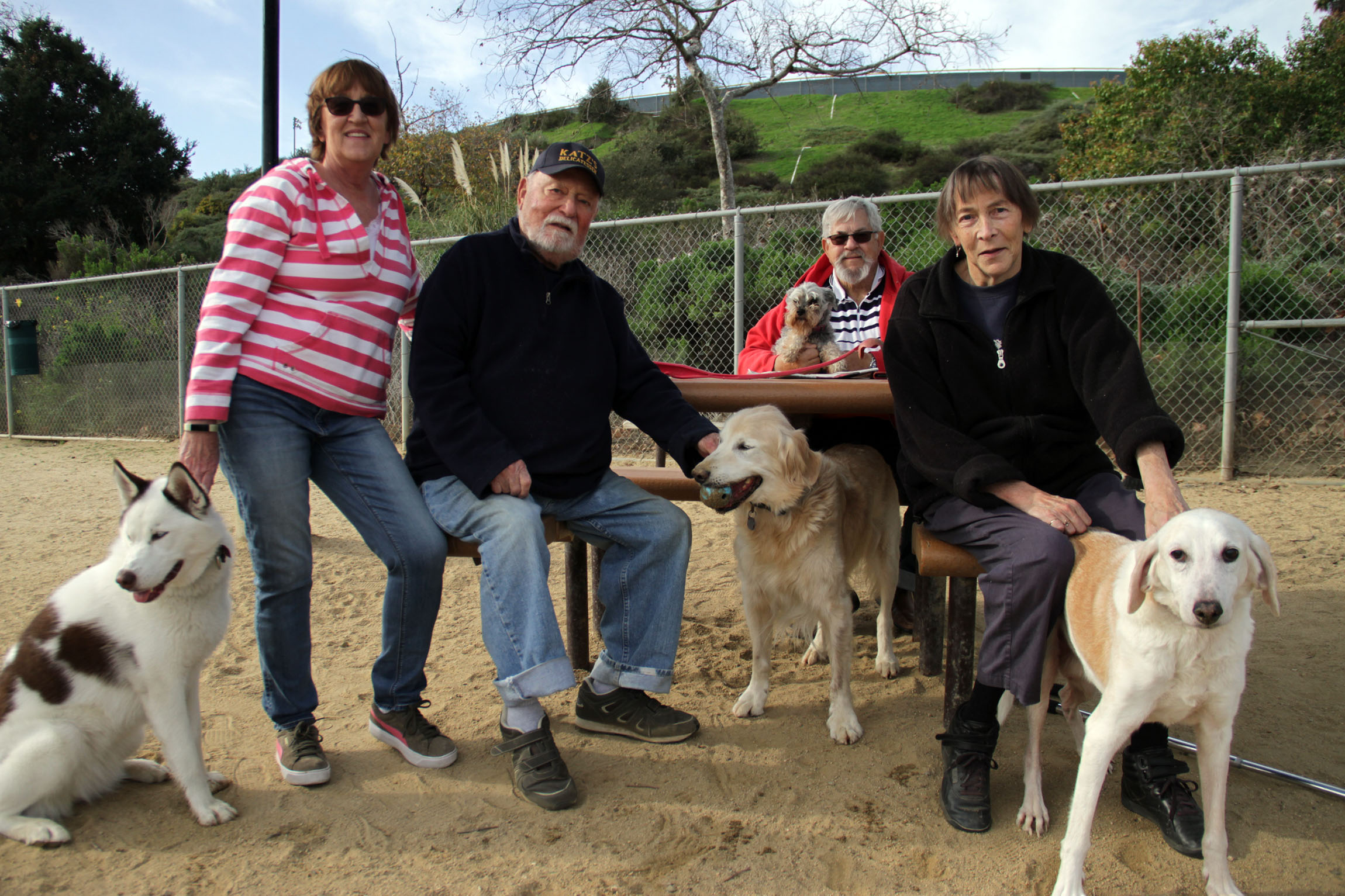 A potential plan to turn a section of the city’s only dog park into a new outdoor shelter for San Clemente’s homeless has garnered the attention of a group of local dog owners who frequent the park and are questioning the city’s rationale behind the idea.

“Why here?” said 74-year-old San Clemente resident Jim Dorsey, pondering the possibility during a recent visit to the park with his dog. The retired police officer noted that the location doesn’t allow for convenient access to resources such as groceries or public transit.

“I measured it, and we’re a mile and a half from Albertsons,” Dorsey said. “So, they (the homeless) have no source of food.”

The Orange County Transportation Authority’s nearest bus stop, on Avenida Pico and El Camino Real, is nearly a 4-mile walk from the park. With no immediate access to public transportation, local dog owner Trinity Willis, 27, pointed out, the homeless individuals who might utilize the campsite are likely to feel stranded.

“Is there even any bus access out here?” she inquired. “That’s going to be harder for them to get out of homelessness if there’s no bus access around here, because public transportation for homeless is really important. If they don’t have access to that, they’re just stranded . . . they can’t do anything.”

The private golf club Bella Collina San Clemente, which neighbors the whole region of local parks, has also expressed concerns, stating that while it understands the city’s dilemma in locating a feasible location for the homeless, it prefers that it not take away a public park to do so.

In an emailed statement from the golf club, it said that the “taking of a public park area, even a dog park that is immediately adjacent to a children’s skate park and baseball field, the Richard Steed Memorial Park is probably not a wise consideration.”

Emphasizing that the plan is still subject to review and approval by both the Planning Commission and city council, Assistant City Manager Erik Sund explained that the park is one of the few pieces of city-owned land that’s vacant and can accommodate such a shelter.

The park is made up of two sections, one for big dogs and one for small dogs. The large-dog section, a dirt lot, is where the city is considering establishing another outdoor homeless shelter, similar to the recently shuttered encampment on Avenida Pico.

This past December, roughly a week after the city had closed the Pico camp, in part because of a dwindling use of the lot, the city council approved the initiation of a general plan amendment meant to reclassify the dog park’s land-use designation to allow for public safety uses.

According to a city report on the amendment, the 0.6-acre site was identified as a feasible location for a potential interim campsite. It’s currently zoned as “open space—public” within the Rancho San Clemente Specific Plan.

“The goal of such an amendment would be to provide the City with more discretion and regulatory flexibility to address issues that adversely affect the public health, safety and welfare,” the city stated in the report.

Initially, the city had previously explained, the council did start to evaluate the feasibility of another vacant city-owned lot on Avenida Fabricante, located in the industrial park zone, but later told city staff to explore additional sites for establishing a camp.

Sund had previously noted that the council’s action in December merely started the process of making the amendment.

On Wednesday, Feb. 5, Sund said the city is primarily focusing on the dog park to utilize as an outdoor shelter. He added that while the city could potentially review other sites to create an alternative dog park, nothing else is officially being considered at this time.

Asked whether the move would mean pet owners of both big and small dogs would have to share the small-dog section, Sund was uncertain. “I think we would maintain the park as a small-dog park, but that’s something we still haven’t reviewed yet,” he said.

ONE TOWN, ONE DOG PARK

Should city councilors decide to move forward, converting the large-dog section of the park into an outdoor shelter, opponents of the idea opine that it’ll only leave the small-dog section available to accommodate their fury companions.

SC Times recently met with a handful of the regulars who gather at the dog park just about every morning. According to Dorsey, one of those regulars, the city hasn’t been doing a great job of maintaining the small-dog section, as it’s typically muddy year-round.

“The park across the street is the park that I used to go to, but it’s so muddied all the time—

summer, winter, it doesn’t matter— and the dogs just get trashed there,” he said.

Fellow park regular and San Clemente dog owner Lynne Spiegel, 70, noted that it wouldn’t be ideal to force big and little dogs to share the same park space. While some in the group of regulars do have small dogs that are comfortable playing with the other big dogs, that won’t always be the case, she said

“Every once in a while, somebody with an aggressive dog will go over there by themselves, and it’s fine ’cause we do have little dogs here, and it’s fine,” said Spiegel, who owns a Treeing Walker Coonhound named Buddy.

Olie, Dorsey’s Miniature Schnauzer, is one of those little dogs that’s used to socializing with the bigger dogs in the group. But, Dorsey said, there should at least be the option for those who don’t feel comfortable with their timid dogs being near big dogs.

“If somebody does have a timid dog, there’s no way of separating them if you have a small park,” Dorsey said, adding: “People like that need to feel safe and be separated from these big guys. I mean, we don’t worry about it, because our dogs are acclimated to it.”

Denise McDonald, whose Husky, Twilight, does get along with Olie, echoed Dorsey’s comments, emphasizing that it’s tough to have big dogs and small gods mixed together in one area.

“Yeah, you can’t mix small dogs with big dogs, especially with my Husky,” McDonald, 66, said. “No way. She would be chasing those little dogs like crazy, and then I would be worried and I wouldn’t come.”

The group of dog owners stressed that while they’d like to save the dog park from turning into an outdoor campsite, they’re supportive of constructing a homeless shelter and providing them with resources elsewhere in the city.

“It has to happen; they can’t be just out in the brush and the communities,” Dorsey said of the city’s homeless population. He also stated the Pico lot was a preferable site because it was centrally located, being near bus stops and places to purchase food.

Reiterating Dorsey’s sentiments, Spiegel said that “none of us are against homeless; we just want them to be put someplace safe.”