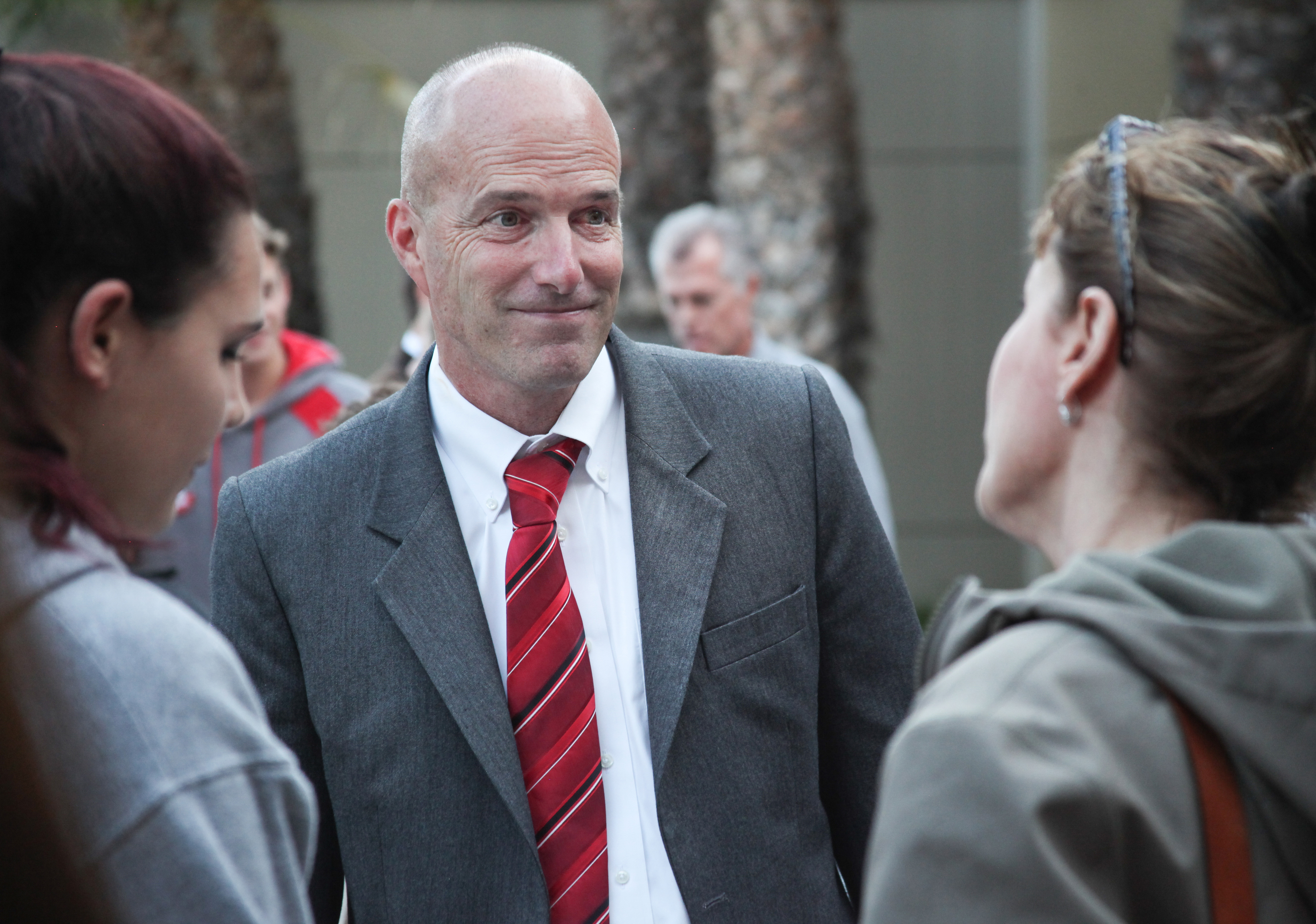 Halt, Who Goes Where? People Continue to Press for Reinstatement of Former Principal

For many San Clemente High School students, parents and faculty, it was a bittersweet reunion June 4.

Hundreds of Michael Halt supporters—many sporting red and black “I Like Mike” buttons— showed up to the special Thursday night meeting of the Capistrano Unified School District Board of Trustees, some planning to speak in favor of the board authorizing an independent investigation into the facts surrounding Halt’s dismissal in May—the sole item on the agenda.

Many were surprised and elated to see that—for the first time since his removal from the school—Halt was in attendance with his family by his side. There wasn’t a minute during the hour-long closed session when the grinning Colonel wasn’t embracing or speaking with supporters. Dozens of students waited in line to take selfies with him. Some just wanted to say, “We miss you.”

The surprises continued following the board’s closed session, during which the trustees voted unanimously to reelect Halt as a CUSD principal. A roar of applause broke out before the board was able to finish relaying the verdict. It wasn’t until after the cheers died down that Halt supporters received the kicker—his reelection wasn’t to San Clemente High School.

“Now that we are at the end of this deliberative process, I am certain that we have learned from this extraordinarily challenging experience,” Board President Lynn Hatton-Hodson said during a prepared statement. “Based on extensive review of the available records and information, as well as candid in-person discussions in closed session, and after careful and thoughtful deliberation, the board unanimously voted 7-0 in favor to adopt the superintendent’s recommendation to offer Michael Halt reelection for the 2015-2016 school year, subject to his acceptance of an alternate administrative assignment within his area’s credential … Under the terms of the superintendent’s recommendation adopted by the board, if the offer is accepted, the probationary certificated employee may return to an administrative position at a different work site.”

Hatton-Hodson added that Halt will be invited to the San Clemente High School graduation ceremony. Later in the meeting, it was clarified that the seniors’ diplomas will have Halt’s signature on them.

Halt said after the meeting that he’s “excited to be there and see them off.”

Following the announcement, Trustee John Alpay, San Clemente’s representative on the board, spoke during his open session agenda item to authorize an independent investigation into the facts surrounding Halt’s personnel matters. If Halt were to accept the board’s offer, Alpay asked instead that the district focus on moving forward.

“We need to restore the faith and trust in this district,” Alpay said. “One thing that I would like to see is a review or an evaluation of … processes regarding termination or nonrenewal of our employees.”

Trustee Jim Reardon’s motion to indefinitely postpone Alpay’s original item for an independent investigation received a second, and the board’s legal counsel advised that public comments would not have to be heard if the item was dismissed. Alpay asked that the comments be heard anyway “in the spirit of openness and transparency.”

One by one, 21 public speakers were called up to the podium, making last minute adjustments to their prepared comments. The impromptu speeches shared a common theme: thanks for listening, but it’s not enough.

“This announcement actually makes me mad,” resident Wendy Shrove said. “We had this little glimmer of hope that you all were hearing us. And I feel like tonight, you just bested us with some legal maneuver to offer him an equivalent position, but you’ll be darned if you’re going to give him back to the school where we want him to be … I think you’ll win, because I think you’ve covered yourselves legally. But morally, you missed it.”

Senior Grant Meyer presented the board with a petition signed by over 400 SCHS seniors. Meyer said the petition, which originally asked that a U.S. Marine Corps Commandant replace Halt at their graduation, was also a symbol of the impact he had on the class.

“Tonight’s decision has helped, but these students and I speak for our senior class and we want him back, not for us, but for the underclassmen who have not learned from him as we have,” Meyer said.

Despite the sour note struck by the decision to assign Halt elsewhere within the district, a massive group of supporters gathered outside the board room following the meeting to cheer for the reinstated principal, who said he was left speechless by the overwhelming community support.

“Throughout this entire process, I’ve been overwhelmed and amazed by all the support that I’ve received from the entire community—parents, teachers, students, even people who don’t have kids at San Clemente High School,” Halt told the San Clemente Times. “They’ve rallied to support me.”

Halt received numerous tearful hugs following the meeting, including one from World and U.S. History teacher Jennifer Toler, who said she was happy to have Halt back as a district principal.

“He’s a wonderful principal and any school—San Clemente especially—but any school in the district would be lucky to have him,” Toler said. “I’m a first year teacher, and he has been fantastic and wonderfully supportive. He’s a member of the team that really looks out for teachers and students.”

SCHS parent Amy Vilardo was one of many to speak with Halt last Thursday night. Halt commended Vilardo’s daughter, SCHS freshman Kaitlyn, for the speech she made during the meeting. Vilardo assured Halt they would continue fighting to get him back to San Clemente High School.

“We’re not going to stop until we get what we want,” Vilardo said. “When you do something wrong, you need to put it back the way it was.”

Halt smiled back at the Vilardos.

“I think everybody knows what my greatest hope is,” he said.

Following the June 4 meeting, Halt said he’s looking “forward to the opportunity of really having a dialogue with the superintendent and being able to see what might be next.”

Julie Hatchel, CUSD Assistant Superintendent of Communications and Public Relations, said Tuesday “the district is working with Mr. Halt regarding placement for next year.” No further comment was provided, as the subject falls within Halt’s “personnel matters.”

The SC Times filed a Public Records Act Request June 1 in order to obtain records, emails and other documents pertaining to Halt’s employment in the district, beginning with his initial hire in May 2013. The district had not yet responded to that request by press time.

Since June 4, supporters of Halt have taken action by requesting that Superintendent Kirsten Vital agendize “discussion of CUSD practices used when evaluating principals” during a future open session. According to an email the SC Times received from the group Kids Working to Bring Mike Back, the response they received from Vital stated that “because the board has already considered and voted on the matter, there is no legal basis for placing an item to reconsider the board’s action on the agenda upon a request from a member of the public.”

According to the board’s bylaws listed on the CUSD website, “Any member of the public may request that a matter within the jurisdiction of the board be placed on the agenda of a regular meeting … The superintendent shall place the matter on a future regular board meeting agenda within 45 days of receipt of the request, taking into account orderly conduct of the district’s business … There is no requirement in state law that the board take action on, or even deliberate about such an item. It must, however, be placed on the agenda …” (BB 9322-(a)).

Alpay said Wednesday he thought the response was “going in the wrong direction.”

“The district office needs to understand San Clemente,” Alpay said. “We rally around our own.”