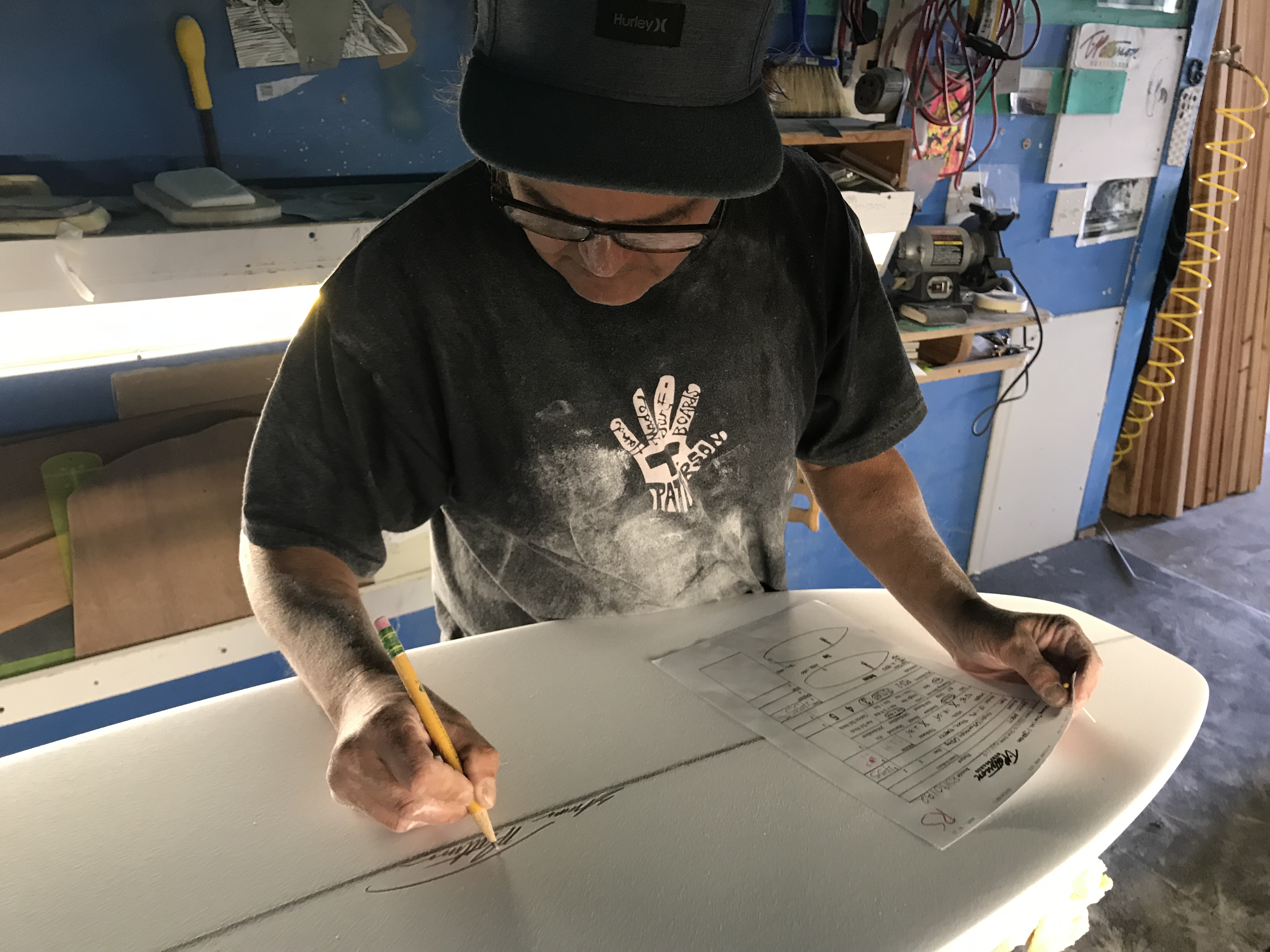 Hanging at the Shop: A Few Minutes in the Shaping Bay with Timmy Patterson

Walking into Timmy Patterson’s shaping bay is a little bit like stepping back in time. It has nothing to do with the boards he’s making. He’s an ardent builder of modern, high-performance equipment. It’s more the vibe. In board shorts and sandals, Timmy whittles away. Friends pop in and out of the shop. They say hello, check out what’s on his rack, tell a little story. Before mass production and overseas factories dominated the surfboard market, the wave-riding universe used to revolve around shaping factories. It still does at Timmy’s.

Timmy grew up in the Hobie factory in Dana Point, watching his dad and uncles shape and build boards. He’s been at it most his life now. In terms of who Timmy has made boards for over the years, I have only 750 words here, and to list them all would mean leaving notables off the list. But Patterson’s distinguished work ranges from shaping for high-flyers Matt Archbold and Christian Fletcher in the ’80s and ’90s, to World Tour sleds for Dana Point’s Pat O’Connell, to current tour dominators Jordy Smith and Adriano De Souza and, most recently, to current World No. 1 Italo Ferreira.

“The rocker for Archy’s boards, Adriano’s boards and Italo’s boards are pretty much the same. It works, we know it works, so why mess with it? Length and outlines change, like boards have gotten shorter and wider, but the rocker hasn’t changed,” Timmy said when I rolled through his shop last week.

I was there to talk about the boards he’s designing for Italo, but just like any trip to Timmy’s, we covered a broad swath of the surf culture.

“You don’t want to overthink things; that’s easy to do,” Patterson said, working a screen down the rail of a board he was shaping.
Over the hour that I was with Timmy, he finished four boards. Speaking to his versatility as a shaper, he polished off a fun-looking grovel board, a retro fish with updated rails and bottom contours, a 9-foot, 6-inch, big-wave gun for Puerto Escondido and a chippy, high-performance shortboard.

“You find what works and make subtle adjustments from there,” he said. “We’re not trying to reinvent the wheel.”

As for what he’s making right now for Italo, who won the Quiksilver Pro Gold Coast earlier this month to start the WSL’s 2019 Championship Tour, the two have actually been working together for years.

“A friend from Brazil, Pinga, brought him to me when he was like 12 years old and said, ‘I’ve got this kid that needs some help with his boards.’ He was so small when I first met him,” Patterson said.

Luiz “Pinga” Campos has discovered and managed a number of top-tier Brazilian surfers over the years, including world champion De Souza and Jadson Andre. Timmy and Pinga teamed up with the surfboard brand, Silver Surf, in Brazil to ensure that the design work that was being done in Timmy’s San Clemente shaping factory was accurately replicated by local shapers closer to Italo’s home turf.

“You build this trust, and you keep working on things until you get it right. There are so many design options and so many materials out there, for the surfers, that can create a lot of noise and confusion,” Patterson said. “There’s a lot to be said for consistency when it comes to shaping for these guys.”

Timmy points to his friend, Matt Biolos, who’s been shaping boards for Kolohe Andino. Over the years, the two have been able to develop a bond that’s been beneficial to both Kolohe and Matt. Kolohe has some of the most consistent, dependable equipment on tour, and Matt has a well-respected surfer on tour repping his boards day in and day out. Ironically, Italo and Kolohe met in the final of the Quiksilver Pro, where Italo edged out Kolohe in the dying minutes.

“I was in the Canary Islands shaping. I was watching online in the middle of the night. Kolohe looked like he had it locked up, and I started walking out of the room. A minute later, I heard Italo got a wave and got the score, so I missed it,” Timmy said, laughing. “But I’m so stoked for Italo. He works so hard. Everyone sees how much fun he’s having, but they don’t see where he’s come from or how hard he’s had to work for it.”