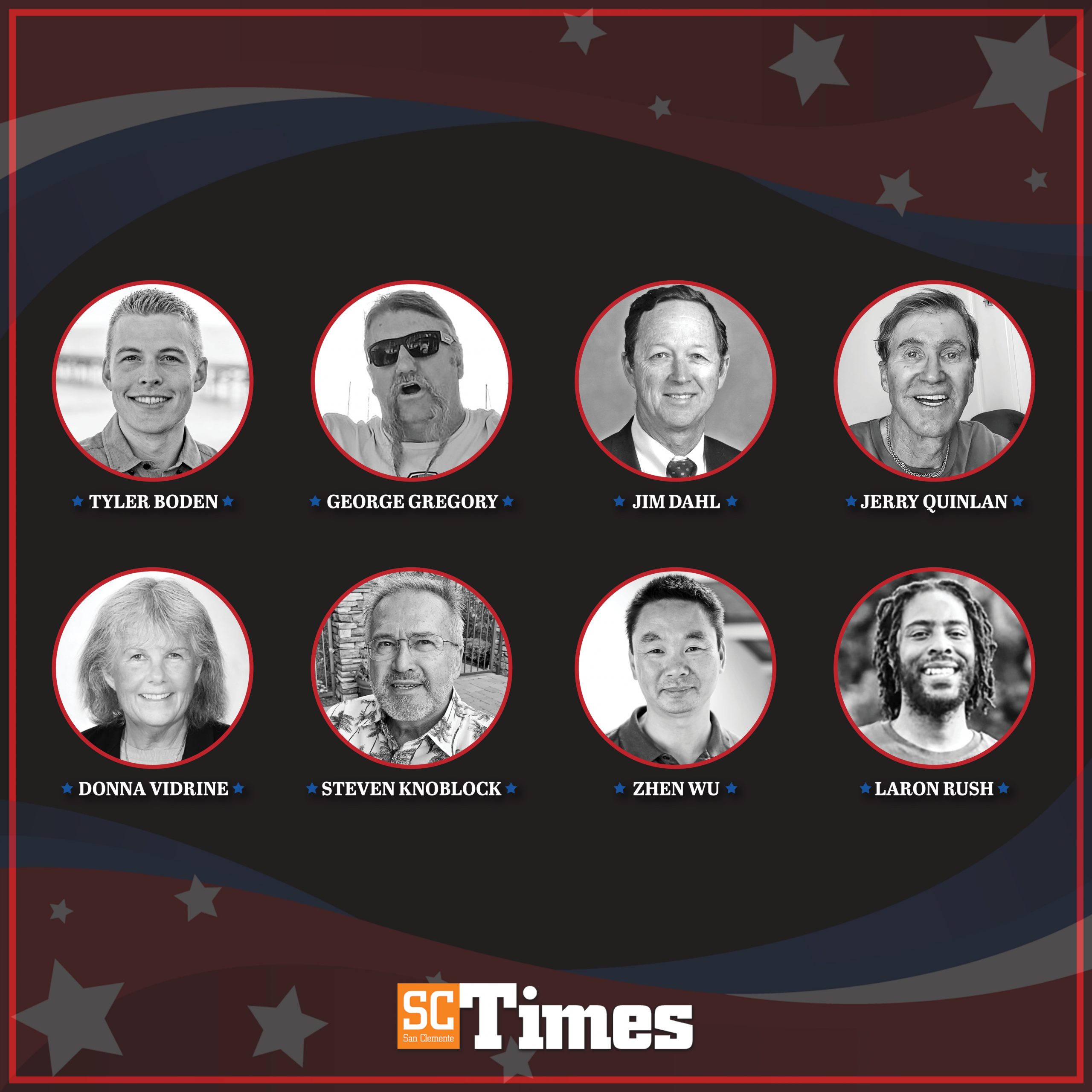 The Race for City Council

Leading up to the San Clemente City Council Special Election on Nov. 3, the San Clemente Times has published a series of questions that we’ve asked each candidate who is running for the two-year seat. Here we present their responses to the third and final question. The list of candidates is published according to the random alphabet the California Secretary of State recently drew.

What do you believe police services in San Clemente should look like?

The city of San Clemente has been served by the Orange County Sheriff’s Department since the mid-1990s, which I believe was a fiscally responsible transition. While there are benefits to having a local police department, I think we are well-served by OCSD, and should continue the county contract with at least as many deputies as we are staffed with today. I believe the city’s focus should be on supporting our sheriff’s deputies with more coordination between code compliance, park rangers, our local Neighborhood Watch groups, the RSVP program, and mental health and homeless outreach services. We should also organize ourselves more closely with San Juan and Dana Point to address issues that face our entire region. Public safety is a primary responsibility of our city government, and we should support our police services wherever possible.

I’d like to see a redevelopment or new police force. Not like the OCSD; their training in the jails have made them mean and harsh. They’ve lost their way. Imminent danger was not evident when the Marine was killed in the schoolyard or the hobo on the street. Please step back, wait for backup, control your weapon, let things calm down. Please stop being lawyers and councils—hence, men—by enforcing laws selectively or justifying abuse by someone a deputy perceives to have abusive rights like strong-arm extortion by tenants, drug rehab houses or council’s anti-workman laws just because workmen use a pickup truck. A local department that we may recognize each other and have some local knowledge of each other. Lastly, service officers, be safe and thank you. George Gregory two-year.

The Orange County Sherriff’s Department has done an exceptional job serving the city of San Clemente over the years. As the city has grown, we have not kept up with our deputy-to-citizen ratio. Comparing San Clemente with other cities in South Orange County, the deputy-to-citizen ratio is much higher. The new council majority should review our situation and find more funds to enhance our standards of service to our citizens.

As a graduate of the San Clemente Citizens Police Academy in 2014, and Vietnam combat veteran, I suggest fostering better professionally trained social outreach squads to deal with the social misfits that have, unfortunately, always been here in my 37 years of owning property and businesses in San Clemente. Then, we can let the sheriff focus on crime. As a city, we could also begin modifying and renegotiating our OC Sheriff’s contract, renewing in 2021. And, as for rioters, we could more stringently deny the violent prone access to our neighborhoods, than was allowed in the recent past. We citizens are ultimately responsible for our protection, through our agreed-upon professional law enforcement, and our elected city councilmembers. “We the people” of San Clemente would be smart to secure “peace through strength” before “rocks through our windows.”

Now is definitely not the time to change police services. We are a safe community with the current police staffing. We will have budget limitations until after the epidemic eases, so I would favor retaining the current level of policing. We’ll need leadership from Sheriff Barnes and OCSD, as well as our city council. OCSD is clearly reforming itself, buying body cameras, building a facility for inmates with mental health issues, and staffing up on mental health specialists. We need to do our part, seek opportunities for the police to engage, be a presence, to build relationships, trust, and connections. I recommend monthly meetings rotating among neighborhoods. And, we need to deal with our homeless professionally, so that our police can, finally, bring them where they need to go. Serve and protect! Equal justice!

Police should be prompt, polite and efficient—and they are. Video of the recent shooting shows our police officers approaching the man in a respectful, patient and professional manner. The deputy’s request to move off the street was met with refusals to comply, yelling and aggressive shoving of the deputies. This ultimately resulted in a scuffle leading to the man’s death after he grabbed the deputy’s weapon. As one who has had to assist a CHP officer wrestling on the ground to gain control of a fighting suspect, I can tell you the split-second decisions they make daily are very difficult. Our police should be honored and appreciated for their brave service. Police staffing levels should require a minimum number of deputies to cover for those on vacation or sick leave.

Police services in San Clemente should look like an integral part of our community. Safety is fundamental in the hierarchy of human needs; therefore, police services is basic and essential. I consider our first responders the community’s guardians and protectors. I’m saddened by Mr. Reinhold’s death. As your councilmember, I will work to improve the collaboration among OCSD, code enforcement, and social services by formulating a protocol of engagement with homeless people and designating a lead agency. This will allow OCSD to redirect some resources to attend to other public safety issues. Meanwhile, we should refrain from making judgments before the investigation is concluded. In this difficult year of 2020, our community needs solidarity more than ever.