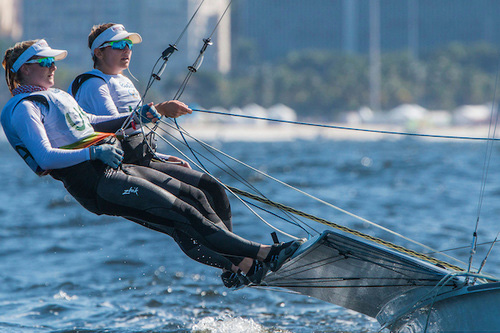 The moment Paris Henken and her Olympic sailing partner Helena Scutt took off from the starting line of Race 5 during the women’s 49erFX event in Rio de Janeiro, the San Clemente native knew they would get a good result.

Henken, the helm, and Scutt, the crew, got out to an early lead thanks to favorable wind conditions and their preparation, and cruised to a preliminary race win, their first together as members of Team USA.

Henken and Scutt, who were among the youngest teams in the event at the 2016 Olympic Games, qualified for the 49erFX medal race on Aug. 18, and placed ninth. The Brazilian duo of Martine Grael and Kahena Kunze won the event.

The conditions during the medal race were not ideal, Henken said. The wind was swirling around off the water and the American duo got hit with a penalty after Henken’s body clipped a buoy, forcing them to make a second 360-degree turn around the marker.

Henken said nerves played a role early. Unforced mistakes caused the Olympic rookies to give up valuable ground at the front of the sailing pack down the stretch of the first three preliminary races. But Henken and Scutt were able to bounce back with several strong performances. They placed inside the top-8 in five of their next six races, including the win in Race 5, to help punch their ticket to the medal race.

“Our goal was to qualify for the medal race, so once we accomplished that we were extremely happy and satisfied,” Henken said.

Henken and Scutt were part of Olympic history, despite not reaching the podium. It was the first time the 49erFX class, a high-performance skiff, was included in the Games.

Henken and Scutt had been building toward their Olympic moment in Rio for years. The two race alongside each other year-round, and have already been discussing making another push for Tokyo 2020.

“I definitely think we have learned so much from when we started our campaign to when we ended. If Helena and I plan to do a second campaign, which is likely, we believe it’s going to be so much easier,” Henken said.  “It takes lots of sacrifices and dedication, but in the end it’s something not everyone gets to experience and I feel very lucky that I get to do something so cool with my best friend,”